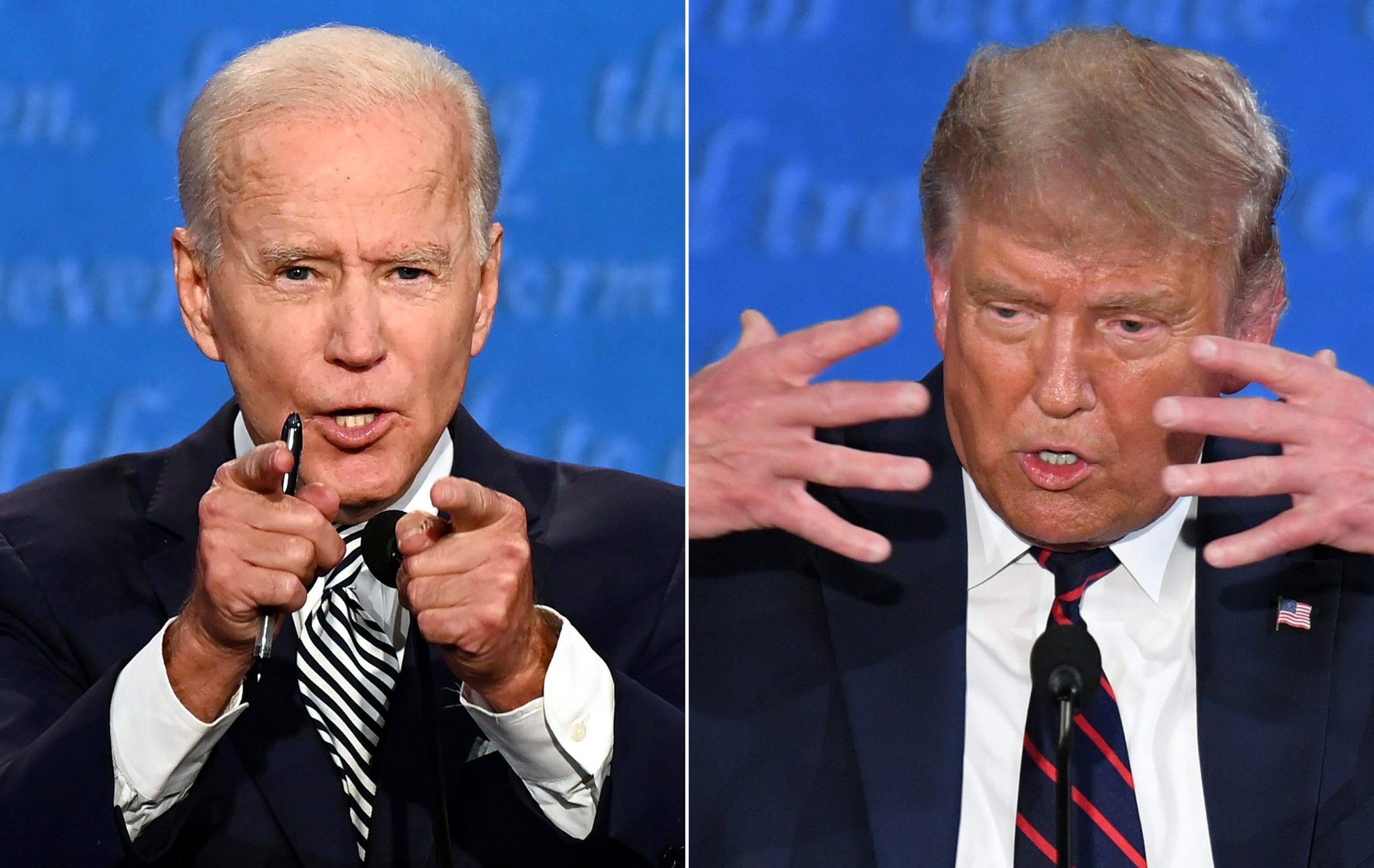 President Donald Trump and former Vice President Joe Biden had their first chance to challenge each other face to face. They did — a lot.

Hardly a minute went by in the 90-minute brawl without one of the candidates angrily interrupting the other, whether on the coronavirus pandemic, the Supreme Court, the economy or anything else, including each other’s families.

“Will you shut up, man?” Biden snapped at Trump at one point. “You’re the worst president America has ever had,” he said later.

“China ate your lunch,” Trump shot back at Biden during questions on the economy.

Even the moderator, Fox News’ Chris Wallace, couldn’t always stay above the fray.

“I hate to raise my voice, but why shouldn’t I be different than the two of you?” the exasperated host said at one point.

Attacks from the outset

The first question was about the Supreme Court, where Trump has nominated conservative Judge Amy Coney Barrett to fill the seat left vacant by the death of Justice Ruth Bader Ginsburg.

“We won the election,” Trump began. “Elections have consequences.”

Biden responded that “the American people have a right to have a say,” and that “we should wait” until after the presidential election to select another justice.

But Trump jumped in before the former vice president had finished his answer. The two candidates started sparring, first over Barrett’s record but quickly moving on to other territory.

Wallace jumped in after a few exchanges, and himself began to bicker with Trump.

Trump and Biden continued to interrupt each other. “Would you shut up, man?” Biden snapped at Trump.

As Wallace moved onto the coronavirus, Biden said with a laugh: “That was really a productive segment.”

Trump spars with the moderator: ‘I guess I’m debating you’

As Wallace asked the second question of the night, Trump jumped in to push back on the “Fox News Sunday” anchor.

Wallace began asking about health care, and Trump interrupted Wallace to dispute his line of questioning about having not introduced a comprehensive plan to replace the Affordable Care Act implemented by former President Barack Obama. Wallace continued to try to get through his question, asking Trump to let him finish.

After a few moments of cross-talk, Trump said, “I guess I’m debating you, not him,” referring to Biden.

Wallace repeatedly asked Trump and Biden to maintain order throughout the debate — though he acknowledged that he had to admonish Trump more.

“Your campaign agreed that both sides would get two-minute answers,” Wallace told Trump late in the debate.

Biden swiped at Trump over the president’s early handling of the coronavirus, alleging that the administration started to inform the public of the disease’s severity only when it hit the stock market.

“Do you believe for a moment what he’s telling you in light of all the lies he’s told you about the whole issue relating to Covid?” Biden asked. “He still hasn’t even acknowledged that he knew this was happening — knew how dangerous it would be back in February — and he didn’t even tell you.”

“He panicked, or just looked at the stock market, one of the two,” Biden added. “Because guess what? A lot of people died and a lot more are going to die unless he gets a lot smarter or a lot quicker.”

Biden and Trump battle over the economy

Both candidates took turns trumpeting their qualifications to navigate the U.S. economy through the coronavirus pandemic.

Trump highlighted his business-friendly tax cuts and stock market gains while Biden noted significant job creation while he was vice president in the Obama administration.

Trump said: “When the stock market goes up, that means jobs. It also means 401(k)s.”

Trump at Biden: “If you got in … if you ever became president with your ideas — you want to terminate my taxes [tax cuts], I’ll tell you what. You’ll lose half of the companies that have poured in here. … They’ll leave.”

Said Biden: “We were able to have an economic recovery that created the jobs you’re talking about. We handed him a booming economy. He blew it.”

“I’m the guy that brought back the automobile industry. I was asked to bring back Chrysler and General Motors. We brought them back right here in the state of Ohio and Michigan. He blew it.”

Trump and Biden spar over their adult children

Biden and Trump sparred over their children, with Trump launching a misleading attack on Biden’s son Hunter over his consulting business.

Trump continued with another unfounded claim: “Why is it, just out of curiosity, the mayor of Moscow’s wife gave your son $3.5 million?”

“None of that is true,” Biden said again.

“He didn’t get $3.5 million?” Trump demanded. According to Politifact, there is no evidence that Hunter Biden had anything to do with the deal in question.

This kind of sparring continued for several minutes, until Biden pivoted.

“Here’s the deal. You want to talk about families and ethics? I don’t want to do that. His family, we can talk about all night,” Biden said, referring to Trump’s adult children.

“My family lost a fortune coming down and helping with government,” Trump shot back. “Every single one of them.”

But Trump returned to Hunter late in the debate.

Trump immediately turned to an attack on what he calls the “radical left” like antifa, referring to antifacist demonstrators.

“I would say almost everything I see is from the left wing,” Trump said, referring to violence at demonstrations. Pressed by Wallace to state his condemnation for White supremacists, Trump said, “Proud Boys, stand back and stand by. But I’ll tell you what, somebody’s got to do something about antifa and the left.”

The Proud Boys is a far-right organization deemed a hate group by the Southern Poverty Law Center. Social media companies such as Facebook and Twitter have suspended accounts and removed pages of members affiliated with the group for hate.

Near the end of the debate, the moderator turned to election integrity. Wallace asked how confident Americans should be that the election will be fair.

Biden urged citizens to vote, whether in person or by mail. He cited Trump administration officials as he assured that there’s “no chance at all that mail-in ballots are a source of manipulation or cheating.”

Trump has repeatedly warned, without evidence, that an expected flood of mail-in ballots due to the pandemic will lead to massive fraud in the 2020 election. Just last week, Trump refused to commit to a peaceful transfer of power if he lost to Biden in the election.

“He’s trying to scare people into thinking that it’s not going to be legitimate,” Biden said of Trump. “Show up and vote. You will determine the outcome of this election.”

In response, Trump continued to sow doubts about the election outcome.

“This is not going to end well,” Trump said. “This is going to be a fraud like you’ve never seen.”

He also returned to his well-worn attacks against the Obama administration for “spying on my campaign.”

“They came after me trying to do a coup,” Trump said. “We’ve caught ’em all.”

“President Obama, he knew about it too,” Trump added, “So don’t tell me about a free transition.”