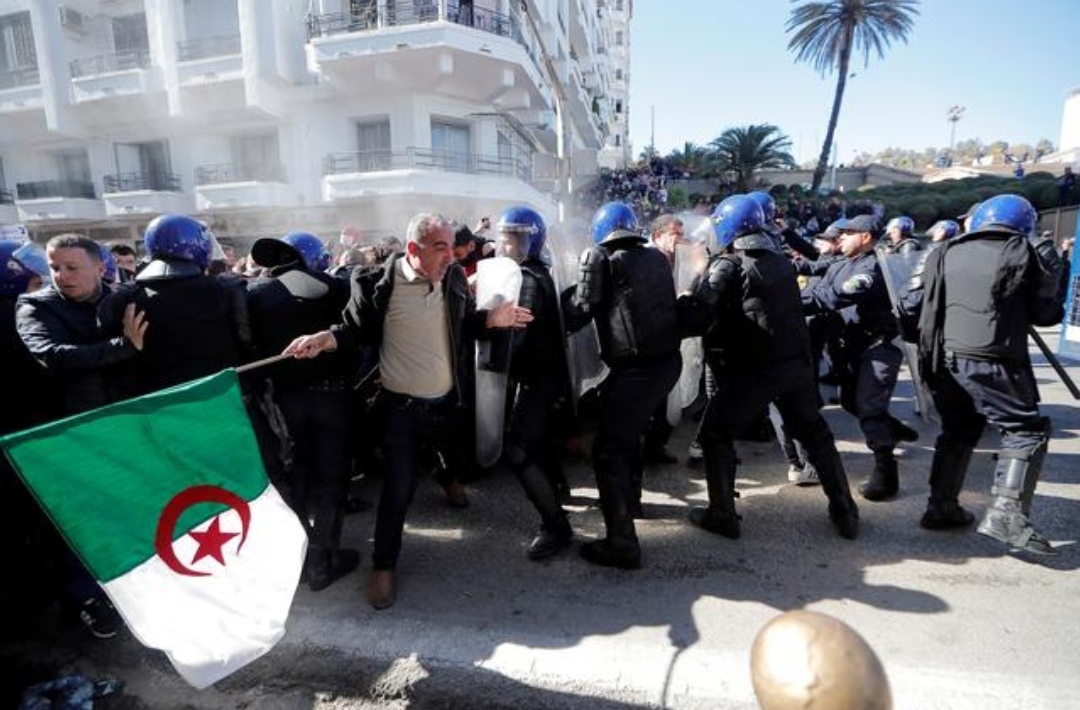 Police officers try to disperse people trying to reach the government palace during a protest against President Abdelaziz Bouteflika’s plan to extend his 20-year rule by seeking a fifth term in April elections in Algiers, Algeria, March 1, 2019.

A total of 183 people were injured during protests across Algeria on Friday against President Abdelaziz Bouteflika’s bid for election to a fifth term, the state news agency APS said on Saturday, citing the health ministry.

One person died of a heart attack, officials said earlier.

Tens of thousands of protesters called on the ailing, 82-year-old Bouteflika to abandon plans to seek re-election in an April presidential vote – Algeria’s biggest anti-government rallies since the Arab Spring eight years ago.

The protests were mostly peaceful but scuffles between police and protesters broke out late on Friday near the presidential place in the capital Algiers.

Algiers was quiet on Saturday.

Large-scale demonstrations – rarely seen in Algeria with its ubiquitous security services – against Bouteflika’s re-election move began a week ago, but Friday saw the biggest turnout yet.

Bouteflika suffered a stroke in 2013 and has been seen in public only a few times since. His re-election bid stoked resentment among Algerians who believe he is not fit to run the major oil- and gas-producing country.

Bouteflika’s campaign manager had said on Tuesday he would submit his official application on Sunday, the deadline for candidates. Bouteflika, who turned 82 on Saturday, has not directly addressed the protests.

Authorities said last week he would travel to Geneva for unspecified medical checks. Swiss television said on Friday Bouteflika was at Geneva University Hospital. There was no official confirmation that Bouteflika was in the Swiss city.

Many Algerians for years avoided politics in public, fearing trouble from the security services or disillusioned as the country has been run by the same group of veterans since the 1954-1962 independence war with France.

Bouteflika has ruled since 1999 and stamped out a decade-long Islamist insurgency early in his rule. Algerians have long tolerated a political system with little space for dissent as a price to pay for peace and stability.

A weak and divided opposition faces high hurdles in mounting an electoral challenge. Since the long-ruling FLN party again picked Bouteflika as its presidential candidate, several parties, trade unions and business groups have endorsed him.