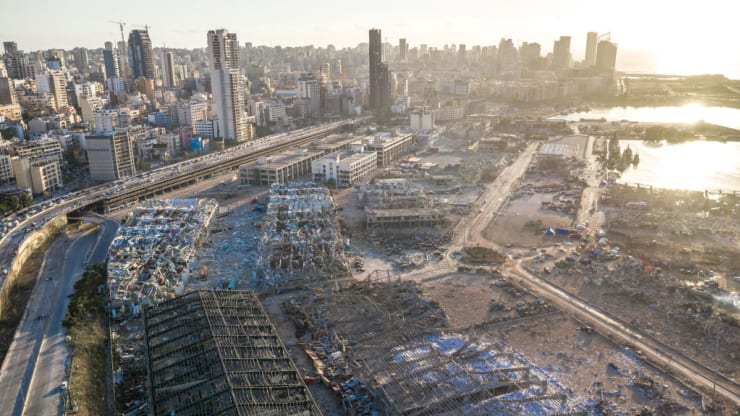 Lebanon on Thursday mourned the victims of the most powerful blast in the country’s history, with many expressing their dismay at the political establishment over missed warnings on the unsafe storage of volatile chemicals.An enormous explosion ripped through the Lebanese capital of Beirut on Tuesday, killing at least 135 people and injuring around 5,000, according to Lebanon’s health minister. It is estimated that up to 250,000 people have lost their homes as a result of the blast.

Prime Minister Hassan Diab declared three days of mourning for the victims of the explosion from Thursday.Officials have said the explosion was caused by 2,750 tons of ammonium nitrate after lying unsecured in a warehouse at the city’s port for six years.

Many have accused Lebanon’s authorities of neglect and corruption after the government conceded it had been aware of the stockpile since 2014.Amnesty International and Human Rights Watch have both separately called for an independent investigation into the blast.

In a statement published on Thursday, Human Rights Watch said they had “serious concerns about the ability of the Lebanese judiciary to conduct a credible and transparent investigation on its own.”

On Wednesday, Lebanon’s cabinet said that all port officials who oversaw storage and guarding of the ammonium nitrate stockpile since 2014 would be put under house arrest, to be overseen by the Lebanese army.Ammonium nitrate is a common industrial chemical often used as fertilizer, but it is also a component in mining explosives when combined with fuel oil and detonated by an explosive charge. It was used in the 1995 bombing of the federal building in Oklahoma City, killing 168 people. Only 2 tons were used in that bombing.The chemical can also combust when met with an intense fire, which appeared to be burning in a part of the Beirut port before the huge explosion.
Local media footage and videos uploaded to social media following the blast showed bloodied people walking through debris-strewn streets. Medical staff had to treat patients in parking lots as hospitals exceeded capacity.The disaster hit a nation already reeling from crisis and fraught with domestic and regional political tensions.
Lebanon is facing the most severe economic crisis in its history — which economists are calling worse than its bloody 1975-1990 civil war — with skyrocketing inflation and unemployment and a currency in free fall, largely brought on by endemic state-level corruption and financial mismanagement.People’s life savings in the local currency, the Lebanese pound, have seen their value wiped out. The World Bank warned in November that half of the country’s population of 6.8 million may fall below the poverty line.And this was all before the coronavirus pandemic hit — now, locals are struggling to afford food and basic goods, with angry protesters decrying government inaction and corruption as forcing them to choose between virus infection or starvation.

The Online Publishers “TOP” platform has gone and done the hard work, they have found the best of social media influencers who are online today. This means that they have connections with many different social media users, who have millions of followers across different pages online. With just the click of one button they can spread information that will potentially reach millions.