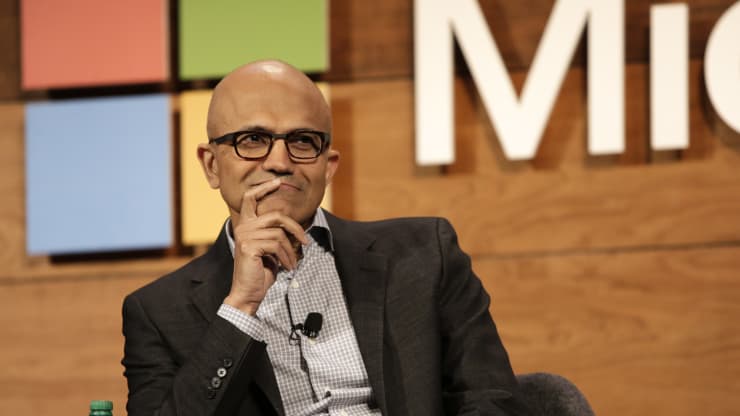 Microsoft shares fell as much as 3% in extended trading on Tuesday after the software and hardware company issued fiscal fourth-quarter earnings and reported a revenue decline for sales of Windows licenses to device makers.

Here’s how the company did:

Revenue rose 21% year over year in the quarter, which ended June 30, according to a statement. In the previous quarter revenue had increased by 19%.

Revenue from Azure, which competes with Amazon Web Services, grew 51% in the quarter. Analysts had been expecting 45.3% revenue growth from Azure, according to a CNBC consensus, while the StreetAccount consensus was 42%. In the prior quarter Azure revenue grew 50%. Microsoft does not disclose Azure revenue in dollars.

The Productivity and Business Processes unit, which contains Office productivity software along with LinkedIn and Dynamics, contributed $14.69 billion in revenue, up 25% and above the StreetAccount consensus of $13.93 billion. The company’s seat growth for commercial Office 365 subscriptions accelerated to 17% from 15%, with the company citing higher revenue per user and better results from products designed for small businesses and front-line workers.

Microsoft’s More Personal Computing segment, which features Windows, as well as devices, gaming and search advertising, generated $14.09 billion in revenue. That’s up 9% and more than the $13.74 billion StreetAccount consensus.

Technology industry research company Gartner estimated that PC shipments grew 4.6% in the quarter. Microsoft’s revenue from device makers for Windows licenses in the quarter fell 3%, with license revenue associated with consumer PCs decelerating to a decline of 4% from 44% growth in the prior quarter. The company pointed to supply constraints, which PC makers Dell and HP have flagged in recent months.

Sales of Microsoft-branded Surface PCs declined 20%, worse than the decline in the mid-teens range that Microsoft had called for in April, because of supply challenges.

The coronavirus pandemic benefited Microsoft results in some ways and hurt in others. The company’s revenue from Xbox content and services, including sales of video games, declined 4%, with the metric comparing unfavorably against 65% growth in the year-ago quarter.

Microsoft’s server products category, which features the Windows Server operating system and SQL Server database software, delivered 16% revenue growth, up from 3% in the prior quarter thanks to an easy comparison against the year-ago quarter because of transactional weakness at the time. Those conditions also arose because of Covid.

During the fiscal fourth quarter Microsoft announced its intent to acquire speech-recognition company Nuance Communications for $19 billion, including debt. It also introduced Windows 11, a new version of its desktop operating system, although sales of licenses to device makers will be deferred.

The company’s board voted to make CEO Satya Nadella its chair, and Microsoft’s top individual shareholder, Co-Founder Bill Gates, announced that he’s splitting up with his wife, Melinda French, who also once worked at Microsoft.

Executives will discuss the results with analysts and issue guidance on a conference call starting at 5:30 p.m. ET.

Notwithstanding the after-hours move, Microsoft shares are up about 29% since the start of 2021, while the S&P 500 index has risen almost 17% over the same period.

How would you like to register your yacht or ship in one of the most heavenly places on Earth?  Read about the benefits and procedures to do so in Vanuatu.  We can help with it.  Go online to https://tradeboard.biz.