Latest Articles
Home BUSINESS The U.S. is falling further behind China and Europe in electric-vehicle production 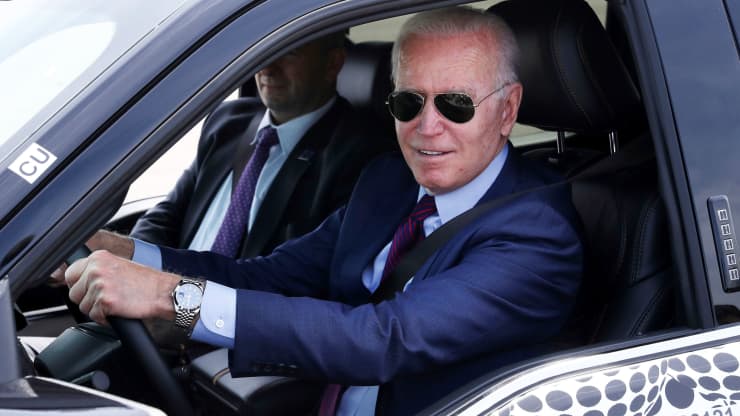 The U.S. is falling further behind China and Europe in electric-vehicle production

The U.S. lags behind China and Europe when it comes to production and uptake of electric vehicles domestically, according to a new study by the International Council on Clean Transportation — and that gap widened from 2017 to 2020.

The world manufactured more than 10 million electric passenger vehicles between 2010 and 2020, according to the study. At the end of 2017, automakers based in the U.S. had churned out 20% of the global stock. By 2020, U.S. automakers represented just 18% of the cumulative number of EVs produced since 2010, while share of production rose in China and Europe.

“Electric vehicle manufacturing growth happens where there are strong national policies designed to spur the market forward,” Nic Lutsey, program director at ICCT, said in a statement. “Hundreds of billions of dollars are on the table, and the United States hasn’t even bothered to pull up a chair.”

From 2010 to 2020, researchers found, China was the largest EV producer geographically and accounted for about 44% of electric vehicles manufactured, with about 4.6 million units in both production and sales during the decade.

Europe produced 25% of global electric vehicles from 2010 to 2020, manufacturing 2.6 million and selling 3.2 million, making the region a net importer. 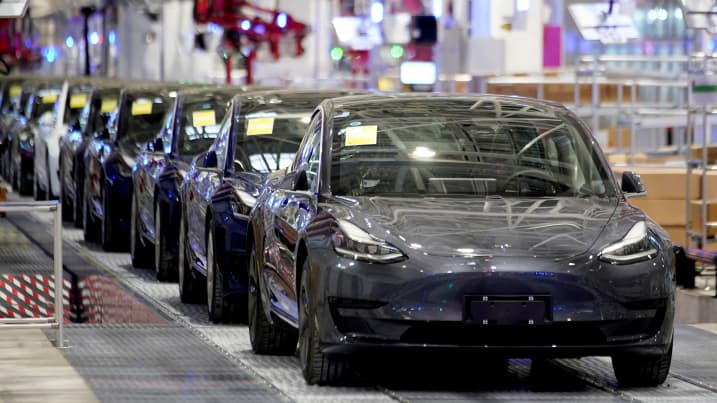 Tesla China-made Model 3 vehicles are seen during a delivery event at its factory in Shanghai, China January 7, 2020.
Aly Song | Reuters

Looking at last year alone, U.S.-based automakers produced at least 450,000 electric vehicles, with Tesla accounting for about 85% of that output for the year. Annual EV exports from plants in the U.S. in 2020 exceeded 215,000, the most of any single nation.

Stronger demand overseas than in the U.S. makes it a necessity for EV makers such as Tesla to ship, and set up shop, beyond the U.S. Companies tend to sell their electric vehicles relatively near the plants where they are assembled.

That demand overseas is creating a network effect of sorts. Automakers have committed more money and are making more aggressive plans to set up new plants and sell a greater variety of EV models overseas than they are in the U.S., the ICCT study notes.

For example, Volkswagen is expected to have the greatest total electric-vehicle production by 2025, based on the company’s announced plans and investments to date, with no all-EV plants in the U.S. but several all-EV assembly plants in Europe and China.

Only two of 44 vehicle assembly plants in the U.S. were dedicated to making only electric vehicles in 2020, the ICCT report said. Three GM plants are scheduled to be converted to produce only EVs in 2021, and Tesla and Lucid Motors each have one new all-EV plant under construction. That would total seven of the 44 U.S. vehicle assembly plants that would be dedicated to making only EVs by 2025, based on companies’ plans.

Policies “focused on a transition to zero-emission vehicles,” or a lack thereof, have spurred these global trends, ICCT researchers concluded.

In Europe, the study notes, automakers have introduced dozens of new electric models and greatly increased the volume of electric cars they are making or plan to make, compared with the U.S. in recent years. This move is largely to meet regional vehicle emission standards.

In China, both “demand- and supply-side policies” helped drive greater production and adoption of electric vehicles, the study found. China has extended a variety of consumer incentives and strengthened regulations that limit internal combustion engine vehicles, while making it easier to buy, register and drive electrics instead.

Meanwhile, in the U.S. some vehicle efficiency standards were rolled back under former President Donald Trump. And federal electric-vehicle purchasing incentives began phasing out for automakers with the highest volume of EV sales, such as Tesla and GM.

A new bipartisan infrastructure plan in the U.S. includes $15 billion toward electric-vehicle infrastructure, electric buses and transit — a fraction of President Joe Biden’s earlier proposal to spend $174 billion on boosting the EV market.