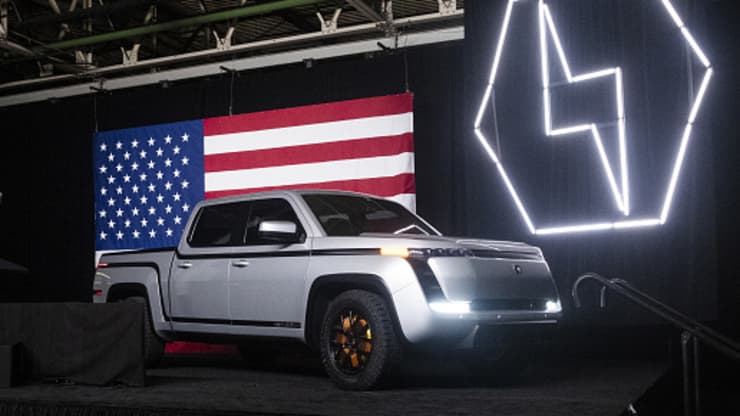 Embattled electric truck company Lordstown Motors has enough funding to operate through May 2022 and remains on track to begin limited production of its Endurance pickup in late September following an executive shake-up that ousted the start-up’s CEO and chairman, executives said Tuesday.

The company’s new chairwoman, Angela Strand, called it a “new day” for the aspiring automaker, which raised bankruptcy concerns after warning investors last week that it had “substantial doubt” about its ability to continue as a going concern in the next year.

Shares of Lordstown Motors soared Tuesday afternoon by as much as 15% before leveling off at about $10 a share, up 8%. The company’s stock price has roughly been cut in half this year, including an 18.8% decline on Monday.

“It’s a new day at Lordstown and there are no disruptions, and there will be no disruptions, to our day-to-day operations,” Strand said during a webcast for the Automotive Press Association. “We remain committed to inspiring, building and maintaining confidence and transparency in our relationships with each other at Lordstown and, very importantly, with our customers, our partners, our suppliers and our shareholders.”

The comments come a day after Lordstown’s chairman and CEO, Steve Burns, and CFO Julio Rodriguez resigned from the company after the board released a summary of an internal investigation into claims made by short seller Hindenburg Research that Lordstown misled investors.

The company said the internal investigation found Hindenburg’s report “is, in significant respects, false and misleading.” The probe, however, did identify “issues regarding the accuracy of certain statements regarding” Lordstown’s preorders, specifically the seriousness of the orders and who was making them.

President Rich Schmidt said the company needs more experienced leadership. And while Lordstown didn’t say the investigation led to Burns’ and Rodriguez’s resignations, he indicated the findings contributed, at least in part, to their abrupt departures. “It was a little bit of both,” he said.

Hindenburg accused Lordstown in March of using “fake” orders to raise capital for its Endurance electric pickup. The short seller said the pickup was years away from production, but Lordstown has maintained it’s on track to start making the vehicle in September. The company on Monday said customer deliveries are scheduled to begin in the first quarter of 2022.

Lordstown Motors Corp Chief Executive Steve Burns poses with a prototype of the electric vehicle start-up’s Endurance pickup truck, which it will begin building in the second half of 2021, at the company’s plant in Lordstown, Ohio, U.S. June 25, 2020.
Lordstown Motors | Reuters

The Securities and Exchange Commission has opened an inquiry looking at Hindenburg’s claims as well as the company’s merger with SPAC DiamondPeak Holdings. Schmidt declined to comment on inquiry.

Strand, who was Lordstown’s lead independent director, is overseeing its transition until a permanent CEO is identified, according to the company.

Schmidt reconfirmed Lordstown is actively raising additional capital, which the company announced plans to do in May. He also said Lordstown is no longer working with Camping World on EV products and solutions for the RV marketplace, citing a need to focus on the Endurance.

“We’re just focused currently on the Endurance truck,” he said. “That’s our next goal for the next three months is to make sure we hit our production targets and stay within our budgets and drive forward to getting the vehicles ready for the market.”