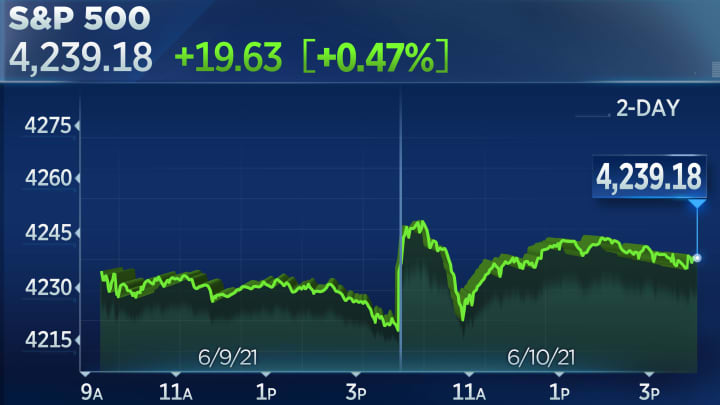 The S&P 500 rose to an all-time high on Thursday as investors shrugged off a key inflation report that showed a bigger-than-expected increase in price pressures.

Consumer prices for May accelerated at their fastest pace since the summer of 2008 amid the economic recovery from the pandemic-triggered recession, the Labor Department reported Thursday.

The consumer price index, which represents a basket including food, energy, groceries and prices across a spectrum of goods, rose 5% from a year ago. Economists surveyed by Dow Jones had been expecting a gain of 4.7%.

“I think there were a lot of people who held back, who wanted to see the hotter inflation number,” CNBC’s Jim Cramer said on “Squawk on the Street.” “Now they’ve said, ‘OK, now that’s over with. Let’s do some buying.’ Because they’ve been on the sideline and they want to get in. I don’t think that’s actually usual these days because there’s still so much buying power out there. People want in.”

Fears of spiking inflation have weighed on the stock market in the last month, with investors worried the jump in prices will raise costs for companies, spark a move higher in interest rates and cause the Federal Reserve to remove its easy money policies.

“This CPI isn’t likely to change the narrative dramatically, and there are still indications that inflation momentum is set to abate in the coming months,” Adam Crisafulli, founder of Vital Knowledge, said in a note Thursday.

Many economists also said the surge in used car costs for the month could have skewed the inflation reading. Used car and truck prices jumped more than 7%, accounting for one-third of the total increase for the month, according to the Bureau of Labor Statistics. The jump in used car prices likely reflects a temporary phenomenon related to the pandemic and auto supply.

A separate report released Thursday showed that jobless claims for the week ended June 5 came in at 376,000, versus a Dow Jones estimate of 370,000. The total still marked the lowest of the pandemic era.

UPS shares rose about 1% after an upgrade from JPMorgan. Shares of Boeing were higher, but Delta Air Lines slipped.

Video-game retailer and meme stock GameStop fell 27% even after the company tapped former Amazon executive Matt Furlong to be its next CEO and said that sales rose 25% last quarter. The company also said it may sell up to 5 million additional shares.

How would you like to register your yacht or ship in one of the most heavenly places on Earth?  Read about the benefits and procedures to do so in Vanuatu.  We can help with it.  Go online to https://tradeboard.biz.