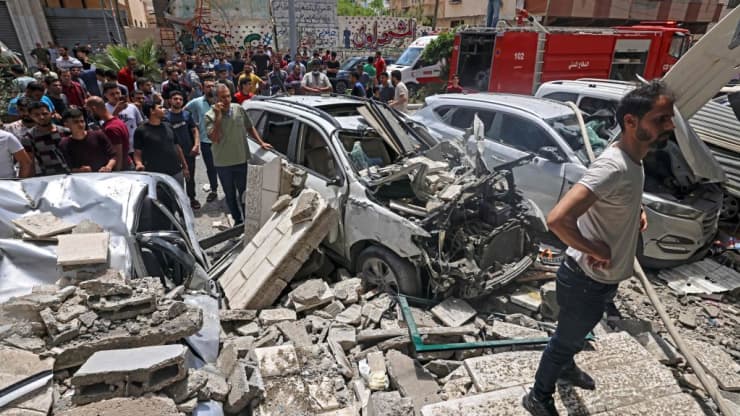 Israel and Hamas agree to cease-fire over Gaza conflict

Israel’s security cabinet on Thursday voted to approve a tentative cease-fire after 11 days of fighting with Hamas in Israel and the Gaza Strip.

Speaking to the Arabic TV network Al-Mayadeen, a Hamas official said the group “obtained guarantees from the mediators” that Israeli airstrikes on Gaza would be halted, and the cease-fire would begin at 2:00 A.M. Friday local time.

U.S. President Joe Biden, in an address shortly after 6 p.m. ET Thursday, said he was informed by Prime Minister Benjamin Netanyahu that Israel had agreed to a “mutual, unconditional cease-fire to begin in less than two hours.”

Biden said Egypt informed him that Hamas had also agreed to halt hostilities. He thanked Egypt’s President Abdel Fattah al-Sisi for the critical role Cairo played in negotiating the truce.

“I believe the Palestinians and Israelis equally deserve to live safely and securely and are to enjoy equal measures of freedom, prosperity, and democracy,” Biden said from the White House.

“My administration will continue our quiet relentless diplomacy toward that end. I believe we have a genuine opportunity to make progress and I’m committed to working for it,” he added.

U.S. President Joe Biden delivers remarks before a ceasefire agreed by Israel and Hamas was to go into effect, during a brief appearance in the Cross Hall at the White House in Washington, May 20, 2021.
Jonathan Ernst | Reuters

The news of a cease-fire comes on the heels of a call Wednesday between Biden and Netanyahu. During that call, Biden said he expected a “significant de-escalation” in violence, according to the White House readout of the call.

It was their fourth conversation since violence erupted last week between Israel and Hamas, a Palestinian Islamic political party with an armed wing of the same name that controls the Gaza Strip.

The tenor from Washington toward Tel Aviv grew increasingly impatient in recent days, as the death toll in Gaza from Israeli airstrikes topped 200, including more than 100 women and children. In Israel, 12 people were killed by rockets fired by Hamas as of Thursday afternoon.

The latest round of fighting has marked the worst outbreak of violence since the war between Israel and Hamas in 2014.

In his evening address on Thursday, Biden extended his condolences to the Palestinian and Israeli families who lost loved ones in the fighting, and reaffirmed that the U.S. would work with the United Nations and others to provide humanitarian assistance to the people of Gaza and help the territory rebuild.

“We will do this in full partnership with the Palestinian Authority, not Hamas, in a manner that does not permit Hamas to simply restock its military arsenal,” Biden added.

The White House, in the days leading up to the cease-fire, pursued a strategy of what it calls “quiet, intensive diplomacy” behind the scenes.

“We have had over 60 calls, from the president on down, with senior leaders in Israel, the Palestinian Authority and other leaders in the region” since the start of the conflict, White House principal deputy press secretary Karine Jean-Pierre told reporters Wednesday.

“The president has done this for a long time, for decades, he believes this is the approach we need to be taking,” she added.

A demolished 6-storey building in Al-Rimal neighborhood contains libraries, youth centers, training for university students, and a mosque that was bombed by Israeli aircraft in raids in Gaza City, Gaza, on May 18, 2021.
Momen Faiz | NurPhoto | Getty Images

Biden appeared reluctant to publicly pressure Netanyahu to halt the airstrikes on what Israel says are military targets embedded in civilian neighborhoods in Gaza.

This has prompted calls from progressive Democrats in Congress and U.S. allies abroad for the president to take a more visible role and exert more diplomatic pressure on Israel, which is deeply reliant on the United States for weapons and military equipment.

Biden, in his conversation with Netanyahu Thursday, reaffirmed U.S. support for Israel’s right to self defense against Hamas rocket attacks. The president also told the prime minister that the U.S. would help Israel replenish its Iron Dome defense system, which is used to intercept such rocket attacks.