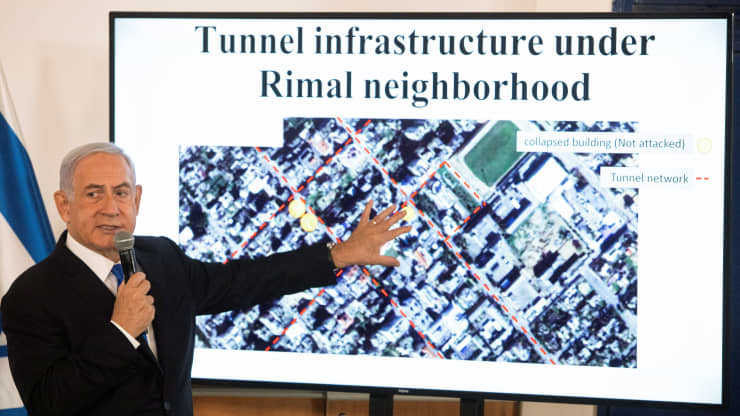 Posted By: Editorial Teamon: May 19, 2021In: NEWSNo Comments
Print Email

Israeli Prime Minister Benjamin Netanyahu on Wednesday said he was determined to continue the bombardment of Gaza, after U.S. President Joe Biden called for a “significant de-escalation today on the path to a ceasefire” during a phone call between the two leaders.

Netanyahu, shortly after speaking with Biden, said he is “determined to continue in this operation until its objective is achieved — to bring back the quiet and security to…citizens of Israel,” according to The Jerusalem Post and other Israeli media outlets.

The worst outbreak of Israeli-Palestinian violence since 2014 has entered its second week as militants in the blockaded Gaza Strip continue their rocket fire.

Hostilities have spilled out into Jerusalem, the West Bank and Israel, as Palestinian protesters striking in solidarity with Gazans clash with Israeli police, some of the protesters throwing rocks while police respond with tear gas. Many of the demonstrators do not support Hamas, but see the protests as acts of resistance against Israel’s occupation of Palestinian territories.

Late Wednesday afternoon Lebanese security officials reported several rockets fired from southern Lebanon into Israel. Israel’s military said air raid sirens were triggered in northern Israel and that one of the four rockets fired into the country was intercepted by its Iron Dome missile defense system.

“In response, IDF artillery forces are striking a number of targets in Lebanon,” the Israel Defense Forces said on their Twitter account.

Airstrikes from Israeli fighter jets killed six people in Gaza on Wednesday and leveled an extended family house in the territory that was home to 40 people. Members of the family say a warning missile fired five minutes before the bombing enabled everyone in the house to escape with their lives.

The Palestinian death toll in Gaza rose to 227 including at least 64 children as of Wednesday, according to health officials there. At least 17 Palestinians have also been killed in the West Bank since Friday. The death toll in Israel currently stands at 12, including two children. Two Thai workers in southern Israel were killed in a rocket attack fired from Gaza on Tuesday. Israel says more than 3,400 rockets have bombarded its cities and towns.

The IDF said it plans to expand its bombing of Hamas’ tunnel networks, many of which run under Gaza’s civilian areas. Already several homes have been destroyed by the bombings, with Palestinian families buried under the rubble. Netanyahu said Tuesday that the operations show “there is a price” for Hamas’ aggression against Israel.

Israeli military spokesman Lt. Col. Jonathan Conricus on Tuesday described the tunnels as the “backbone” of Hamas’ operations, saying that the campaign to obliterate the subterranean network “will be expanded” in the coming days.

Hamas — the U.S.-designated terrorist group spearheading the rocket attacks on Israel — also governs the Gaza Strip, a 140-square mile piece of land housing 2 million people that has been under Israeli blockade since 2007.

International efforts toward a cease-fire

International calls for cessation of the violence have meanwhile grown. Biden in a Wednesday morning call with Netanyahu said he expected “a significant de-escalation today on the path to a cease-fire.” It was the fourth call between the two heads of state since the violence erupted.

Meanwhile, France, Egypt and Jordan all pushed for an immediate cease-fire and unhindered access to humanitarian aid in the beleaguered Gaza Strip.

“The three leaders (of France, Egypt and Jordan) emphasized the urgency of addressing the root causes of the Israeli-Palestinian conflict by resuming effective negotiations to achieve a just and lasting peace,” a joint statement said Wednesday.

“The three leaders emphasized that the resolution of the Israeli-Palestinian conflict on the basis of the two-state solution remains indispensable for a comprehensive peace in the region.”

Members of the U.N. Security Council have meanwhile pushed for resolutions calling for cease-fires, all of which the U.S. have so far blocked, reportedly because the texts did not mention Hamas’ rocket attacks as part of the problem. The latest U.S. rejection of a resolution was late Tuesday night, leaving the Security Council with no joint statement as bombs and rockets continued to fly.

There may be a sign of progress, however; late Tuesday night, Israel media reported that diplomatic efforts involving Egypt and the U.S. could produce a cease-fire in the next two to three days. Egypt holds significant clout as it brokered the truce that ended the last Gaza war in 2014, and is the only country with lines of communication to both Israel and Hamas.

The government of Egyptian President Abdel-Fattah el-Sissi has already opened communication with Hamas leader Ismail Haniyeh and sent mediators to Jerusalem, and has opened its border to Gaza — the only land border connecting the blockaded enclave to the rest of the world — to allow injured Gazans access to Egyptian hospitals.

International pressure, however, may be fruitless as long as Hamas and Israel have incentives to continue attacking one another. Even left-wing Jewish members of Israel’s parliament who support Palestinian statehood have not called for an end to the Israeli military offensive, given that Hamas’ rockets are still being launched at Tel Aviv and Jerusalem.

The U.S. administration continues to reiterate Israel’s “right to defend itself.” Washington is Israel’s top arms dealer, and provides it with $3.8 billion in military aid annually.

Israeli media reported this week that House Democrats will demand a halt to a planned sale by the Biden administration of precision-guided missiles to Israel. The administration earlier in May notified Congress of an intended sale of $735 million of the weapons to Israel, Reuters reported at the time.