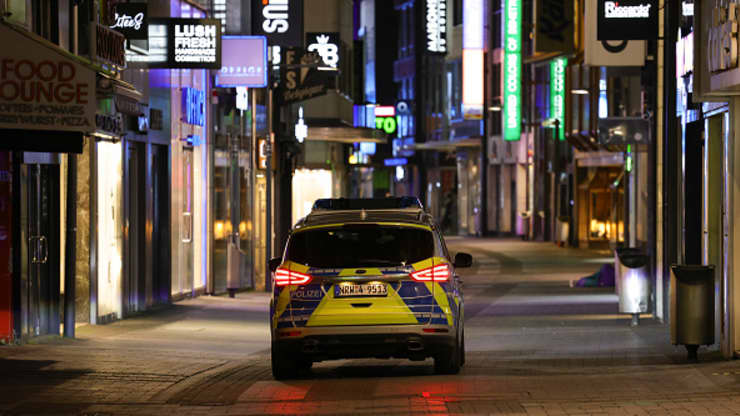 Germany has implemented tough lockdown rules in a bid to curb a third wave of infections, issuing a set of new measures expected to last until June.

Protests have been seen in several German cities after the restrictions were introduced this weekend on coronavirus hot spots.

A curfew, limits on customers in shops, leisure center closures and limits on household contacts are part of the measures.

Germany has been struggling to suppress a third wave, largely attributed to the spread of a more infectious strain of the virus that first emerged in the U.K. last fall.

Enacting a “nationwide emergency brake,” cities or districts that exceed a seven-day incidence rate of 100 new infections per 100,000 inhabitants over three consecutive days must now implement the lockdowns.

Schools are to close if incidence rates are above 165 new cases per 100,000 inhabitants for three days in a row.

Data from the Robert Koch Institute, Germany’s public health body, shows that all but one of Germany’s 16 states are above the threshold for the emergency brake to kick in, and seven states have an incidence rate above 165. The nationwide seven-day average of cases per 100,000 people stood at 169.3 on Monday.

The measures, set out in the Infection Protection Act, effectively expand the federal government’s authority to control the pandemic. Germany’s states have been largely able to set their own rules, leading to variations across the country with some states reluctant to impose stricter measures despite a surge in infections.

Nonetheless, the measures — and, particularly, the curfew, which will run from 10 p.m. to 5 a.m. and allows people to leave their homes only if they must go to or from work, seek medical assistance or take a dog for a walk — have provoked fury among some members of the public, with small demonstrations taking place in several cities at the weekend, notably Frankfurt and Hanover.

‘Do what is necessary’

“If we succeed now in reducing infections significantly and quickly, step-by-step relaxations will be possible in the foreseeable future,” she said in her weekly video podcast.

“Let us now once again do what is necessary and together show consideration and responsibility.”

“What we’re hearing from doctors and the nursing staff, these are real cries for help,” she said. “We — the state, society, citizens — we all have to help,” she added.

Finance Minister Olaf Scholz told the Bild am Sonntag newspaper that he didn’t think the measures would be eased before the end of May while German Health Minister Jens Spahn told the German Parliament, the Bundestag, that “the situation is serious, very serious.”

While vaccinations and testing provide some way out of the pandemic, only “reducing contacts and thus reducing transmission of the infection” can contain the third wave, Spahn said.

The new measures could further dent the popularity of Merkel’s ruling conservative alliance, the Christian Democratic Union and its sister party, the Christian Social Union.

A second voter poll has now put the Green Party ahead of the CDU-CSU bloc. The poll by Kantar for Bild am Sonntag put support for the Greens at 28%, 1 percentage point above support for the CDU-CSU. If the Greens’ positive momentum continues and is borne out in the September federal election, the Greens could be the most powerful influence in a likely coalition government with the conservative bloc.