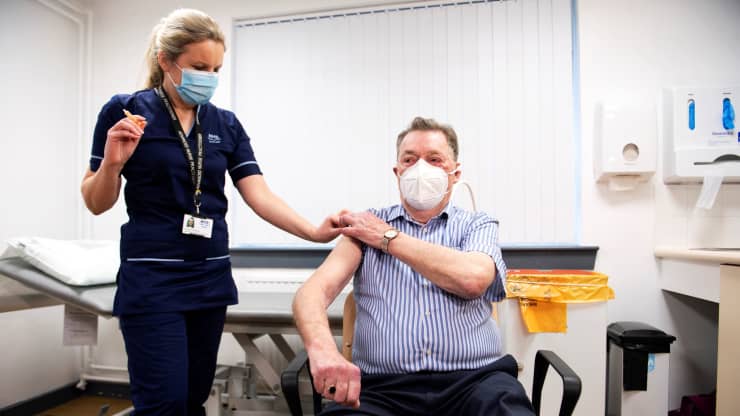 A single dose of Oxford-AstraZeneca or Pfizer-BioNTech’s Covid-19 vaccine drastically reduces the risk of infection in adults of all ages, British researchers have found.

Two studies released on Friday analyzed more than 1.6 million nose and throat swabs taken from 373,402 people between December and April. The data was collected as part of the ongoing Covid-19 Infection Survey, carried out by the University of Oxford, the U.K.‘s Office of National Statistics and the U.K.’s Department for Health and Social Care.

Researchers found that 21 days after a single dose of either the Oxford-AstraZeneca or the Pfizer-BioNTech vaccine, new Covid infections — both symptomatic and asymptomatic — had fallen by 65%.

Symptomatic infections fell by 74% three weeks after a single dose of either vaccine, while asymptomatic cases were down by 57%, the data showed.

A second vaccine dose reduced the overall infection rate by 70%, with symptomatic Covid infections down by 90% and asymptomatic cases of the virus cut by 49%.

Researchers likened these effects to the natural immunity gained from being infected with the virus.

However, they warned that the fact that vaccinated individuals could still be infected — even if those infections were predominantly asymptomatic — meant “onward transmission remained a possibility.”

Vaccines had a similar affect in adults of all ages when it came to reducing infection rates, the study found, with their ability to reduce infections also similar regardless of whether or not participants had long-term health conditions.

What about antibody resistance?

They found that older adults — particularly among those over the age of 60 — who had never contracted Covid had a lower immune response to a single vaccine dose than those who had been infected with the virus before.

Antibody responses to two doses of the Pfizer-BioNTech vaccine were high across all age groups, data showed, meaning that older adults were able to reach similar antibody levels to those who had received one vaccine dose after previous Covid infection.

Antibody levels rose more slowly following a single dose of the Oxford-AstraZeneca vaccine than the Pfizer-BioNTech alternative — however, antibody levels dropped more quickly following a dose of the latter, particularly in older adults, so that patients reached similar levels of antibodies to those seen after a first shot of the Oxford-AstraZeneca vaccine.

Although immune responses differed among age groups, scientists emphasized that there was no group that didn’t respond to either vaccine. However, a small number of people — less than 5% — had low immune responses to both vaccines.

The Oxford-AstraZeneca vaccine has been approved for use in the U.K., India and several other countries, but it has faced temporary suspensions in some markets over concerns it could be linked to rare blood clots. Global health officials have said that the benefits of administering the vaccine continue to outweigh the risks.

The WHO recommends an interval of eight to 12 weeks between the first and second dose of the Oxford-AstraZeneca vaccine.

The Pfizer-BioNTech vaccine is also being administered in multiple countries, including the United States. The U.S. Centers for Disease Control and Prevention recommends receiving a second dose of the vaccine three weeks after the first.

In February, the U.K. launched a trial to investigate whether mixing doses of the Oxford-AstraZeneca and the Pfizer-BioNTech vaccines could be effective.

Sarah Walker, professor of medical statistics and epidemiology at the University of Oxford and chief investigator and academic lead on the Covid-19 Infection Survey, said on Friday that scientists still weren’t sure how much of an antibody response, and for how long, was needed for long-term protection against Covid.