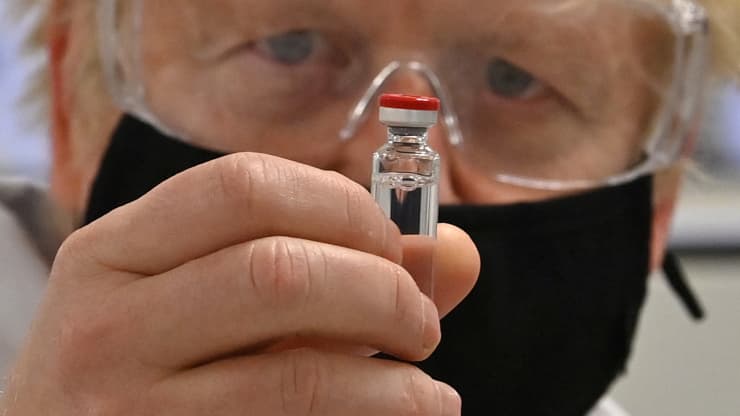 The British government and health experts in the country have rushed to defend the coronavirus vaccine developed by AstraZeneca and the University of Oxford following concerns over a possible link to blood clots.

On Wednesday, the U.K.’s health and vaccine regulators issued a change of guidance over who should receive the shot. They now recommend that anyone under the age of 30 should receive an alternative vaccine amid concerns that it could, in rare circumstances, lead to a serious blood clot.

Following a safety review of the AstraZeneca vaccine, sparked by concerns over reports of rare blood clotting disorders in a small number of vaccinated individuals, both the U.K. and European medicines regulators (the MHRA and EMA, respectively) stressed that the benefits of the jab still outweighed the risks.

However, amid concerns that the reputation of the vaccine could be damaged further, experts have rushed to defend it – and one Twitter user commented that officials appeared to have gone into “damage limitation” mode.

On Thursday, the U.K. health secretary stressed that the risk of a blood clot after receiving the AstraZeneca Covid vaccination is about the same as on a long-haul flight. He said the safety measures surrounding the vaccine were robust and enabled regulators to “spot this extremely rare event.”

On the chances of developing a blood clot, Matt Hancock told BBC Breakfast: “The safety system that we have around this vaccine is so sensitive that it can pick up events that are four in a million – I’m told this is about the equivalent risk of taking a long-haul flight.”

Meanwhile, U.K. Prime Minister Boris Johnson, who has received a first shot of the vaccine himself, said that “the best thing people should do is look at what the MHRA say, our independent regulator – that’s why we have them, that’s why they are independent.

“Their advice to people is to keep going out there, get your jab, get your second jab,” he added on Thursday.

It comes amid growing concerns that Wednesday’s announcement could lead to vaccine hesitancy in Britain, where the immunization program has gone well so far, with over 31.7 million adults having received a first dose of a vaccine, to date. The U.K. has been working through priority groups for a vaccine, with the under-50s (without underlying health conditions) next in line for a shot.

England’s Deputy Chief Medical Officer Jonathan Van-Tam also sought to downplay concerns on Wednesday, saying that the reports of blood clots were “vanishingly rare.” He also noted that “changes in preference for vaccines are business as usual and this is a course correction.”

“If you sail a massive liner across the Atlantic, then it’s not really reasonable that you aren’t going to have to make at least one course correction during that voyage,” he said at a press briefing, adding that the vaccines were be kept under “very careful review.”

Andrew Freedman, reader in infectious diseases at Cardiff University School of Medicine, was among the experts saying the move by the U.K. to restrict the use of the AstraZeneca vaccine was sensible.

“It does sound like a sensible decision based on the evidence we have so far of a probable causal link between the AZ vaccine and these very rare thrombotic side effects that have been noted,” he told CNBC Thursday. However he noted that vaccine hesitancy was now “clearly a concern.”

“It’s going to be important to keep on emphasizing the message that vaccination is saving lives and has already saved thousands of lives in the U.K. already,” he added.

Meanwhile, Andrew Pollard, professor of pediatric infection and immunity at the University of Oxford, which developed the shot along with AstraZeneca, said in a statement Wednesday that “safety has been our priority throughout the development of the vaccine … and we are reassured to see that safety monitoring continues under the close scrutiny of regulators and public health authorities as the vaccine is rolled out around the world.”

Countries in mainland Europe are likely to have a harder time convincing their citizens that the AstraZeneca vaccine is safe, given the numerous doubts and disputes over the shot and supplies to date.

After a second review into the shot, the European Medicines Agency also ruled on Wednesday that the vaccine was safe, but said it found a “possible link” between the jab and very rare cases of blood clots. The EMA did not place any age restrictions on recipients, however.

The agency’s Executive Director Emer Cooke looked to reassure the public, noting that researchers were still trying to find out what has been causing a small number of rare but serious clots, including cerebral venous sinus thrombosis (CVST).

The issue, “clearly demonstrates one of the challenges posed by large scale vaccination campaigns when millions of people receive these vaccines, very rare events can occur that were not identified during the clinical trials,” she said.

EU leaders met on Wednesday night but were unable to agree on a coordinated strategy regarding the AstraZeneca vaccine.

To date, four European countries have stopped using the AstraZeneca vaccine altogether, including Denmark and the Netherlands, while a raft of others, including Germany, France and Spain, have put age restrictions on the shot.

Most of the cases of blood clots identified by the regulators occurred in women under 60 within two weeks of the shot. Officials are still looking into specific risk factors that could have contributed to the phenomenon, however.

Unusual blood clotting with low blood platelets will be added as a “very rare” side effect to the vaccine’s product information, the EMA added.