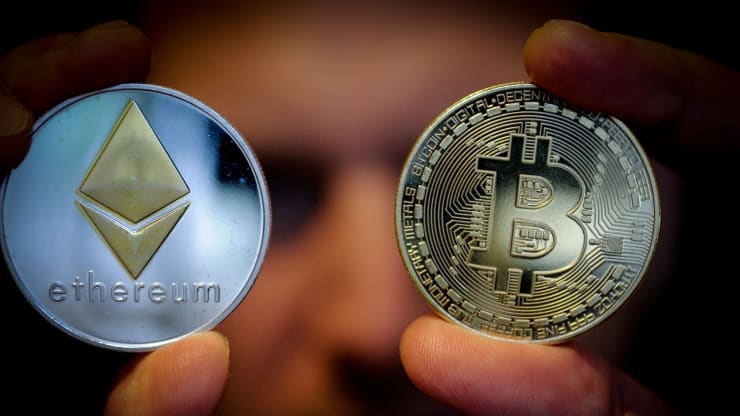 China — The value of the cryptocurrency market topped $2 trillion for the first time on Monday driven by a rally in ether, the second-largest digital coin.

In just over two months, the market capitalization of the cryptocurrency market has doubled, according to price tracking website CoinGecko, as retail and institutional investors pile into the space.

Last month, bitcoin hit a record high of above $61,000. The digital coin was trading at about $58,800 on Tuesday, according to Coindesk data.

But the latest boost in the cryptocurrency market appears to have been driven by ether, the digital coin that powers the Ethereum blockchain.

Bitcoin also runs on a technology called blockchain which is a public ledger of activity and a way for transactions to take place using the cryptocurrency. In comparison, the Ethereum blockchain is more like a software platform that allows developers to build apps on top of it. Users can then spend ether on these apps.

So-called smart contracts are a key feature of Ethereum. These are contracts that can be automatically executed using code.

There is growing excitement about the use of Ethereum in so-called decentralized finance, or DeFi, applications. These are blockchain-based financial services, such as lending, which could in theory bypass banks and brokerages. Users of these apps may transact using cryptocurrency.

Ethereum also has the underlying technology behind the recent craze in non-fungible tokens, or NFTs — a new type of digital asset.

Billionaire investor Mark Cuban owns ether and said that it is the “closest we have to a true currency.”

Ether hit an all-time high of $2,151.25 on Tuesday morning Singapore time, according to CoinDesk. It is up over 180% year-to-date.

The digital currency is also seeing interest among companies. Chinese app maker Meitu bought $22.1 million worth of ether last month, making it one of the first major companies to do so.

Bitcoin still remains the powerhouse of the cryptocurrency market and over the last few months, saw a big increase in interest among companies and large institutional investors.

Tesla and Square are among a handful of companies that have purchased bitcoin.

Meanwhile, major investment banks are exploring ways to allow clients to get involved with digital asset investments. In March, CNBC reported that Morgan Stanley became the first major U.S. bank to offer its wealth management clients access to bitcoin funds. CNBC also reported last month that Goldman Sachs is gearing up to launch its first investment vehicles for bitcoin and other digital assets to clients of its private wealth management group.

There is also hope among investors for an expanding portfolio of investment products and many are watching Grayscale Investments, which runs one of the largest publicly traded bitcoin funds. It is known as the Grayscale Bitcoin Trust.

The company said on Monday that it is “100% committed” to converting that trust into an exchange-traded fund, or ETF. That would effectively track the price of bitcoin and allow traders to play the price movement without owning the cryptocurrency itself. It could be a way for more investors to be involved in the bitcoin market.