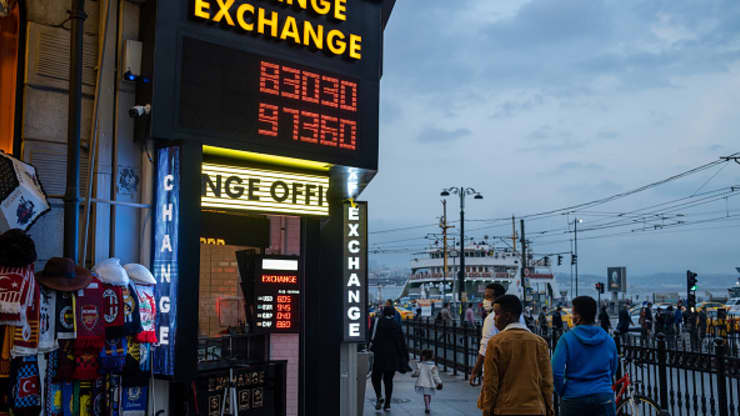 The currency plunged more than 16% in early morning Asian trading, according to analysts, hitting 8.4 against the dollar compared to a close of 7.21 on Friday. It pared some losses to trade around 7.9 to the dollar by 11 a.m. local time, although the greenback was still up nearly 10% on the lira.

The news is set to further rock the economy of 82 million people and could have a ripple effect on other emerging markets exposed to the lira; markets in Japan were down on Monday morning as the currency move hit long-lira traders there.

“This is a truly idiotic decision by Erdogan and markets will express their opinions on Monday and it is likely to be an ugly reaction,” Timothy Ash, senior emerging markets strategist at Bluebay Asset Management, wrote in a client email over the weekend.

“People are just shocked,” Ash added on Monday, describing the currency drop as “the price of firing Agbal.”

Naci Agbal, who was sacked by Erdogan on Saturday, had served less than five months at the head of Turkey’s central bank. During that time he raised the country’s main interest rate by roughly 450 basis points to 19% — something that the vast majority of economists believe was necessary to tame Turkey’s high inflation and bring stability to the lira.

The period also saw an improvement in investor confidence and portfolio inflows of $10 billion, as well as lira appreciation of 18% — but it drew Erdogan’s ire, as the president has spent years railing against interest rates, which he calls “evil.”  The president gave no reason for the firing, but it came just two days after Agbal raised rates by 200 basis points.

The office of the Turkish Presidency did not reply to  request for comment.

The response from the financial community to Erdogan’s move was swift and overwhelmingly negative.

“Turkey is again engulfed in monetary policy crisis,” analysts at Societe Generale wrote in a note Monday. “With Naci Agbal’s removal from the CBRT, Turkey loses one of its last remaining anchors of institutional credibility.”

Commerzbank also described Agbal as someone who had been good for the country’s finances.

“The removal of the market-friendly governor is likely to hurt policy credibility in our view,” its emerging markets analysts wrote on Monday. “In a scenario of a reversal of the past four months’ portfolio inflows of $10bn and/or restart of dollarisation, we may see a major spike in volatility, probably resulting in interventionist policies again.”

‘Inflation is likely to accelerate’

The story is not a new one; economists have long been wary of what many describe as Erdogan’s strong-arming of the central bank to keep interest rates lower, spooking investors over the bank’s lack of autonomy on monetary policy. This, along with other factors including falling foreign exchange reserves and high debt levels, have sent the currency falling for years; in late 2017, a dollar bought 3.5 lira; today, it can buy nearly 8.

Erdogan’s desire to keep rates low stems from his view that interest rates cause inflation; the vast majority of economists argue that it’s the other way around, and that Turkey desperately needs monetary policy tightening to quell its currently 15% inflation level and shore up the currency. Inflation in the country has largely been caused by credit-driven growth, foreign exchange depreciation and rising global energy prices.

In his first communication as central bank governor Sunday, he did not mention any continuation of monetary tightening. Analysts and international banks now expect the lira to fall further if the central bank does not raise rates.

“Inflation is likely to accelerate as the lira takes another tumble, inflation expectations increase, and various global factors further weigh on the situation,” Erik Meyersson, senior economist at Handelsbanken Macro Research in Stockholm.

“It will require a lot from Turkish authorities to avoid another financial crisis in the coming period.“