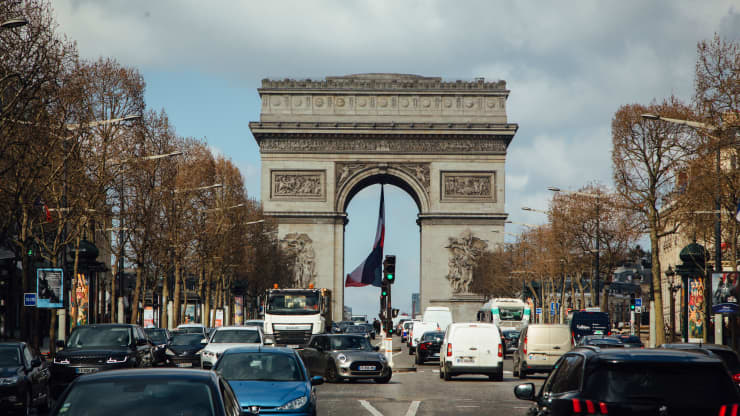 LONDON — Warnings of an exponential rise in infections for Germany and a fresh monthlong lockdown in Paris have underlined the dire situation across Europe as the coronavirus surges once again.

The variant first discovered in the U.K. is seen as the reason for the new spike. The strain is reported to be much more virulent than the original one.

The French capital and northern parts of the country will enter a new lockdown Friday, although schools and essential shops will stay open.

The country’s seven-day average of new coronavirus cases rose above 25,000 this week for the first time since November.

In Germany, Chancellor Angela Merkel had announced an easing of lockdowns in March. That was when the number of infections per 100,000 people over seven days was at 65.

But that number is now at 96 and there are real fears that infections at Easter could mirror what they were at Christmas.

“The rising case numbers may mean that we cannot take further opening steps in the weeks to come,” German Health Minister Jens Spahn told a news conference Friday, according to Reuters.

“On the contrary, we may even have to take steps backwards.”

The country has the sixth-highest death toll in the world with at least 103,855 fatalities, according to data from Johns Hopkins University.

Poland has also seen a huge surge in infections with approximately 52% of new cases linked to the variant from Britain, according to Reuters.

Total cases for the country pushed passed 2 million on Friday with 25,998 in the last 24 hours.

The surge comes as EU nations try to press ahead with their vaccination campaigns, which have so far underperformed compared with the likes of those in the U.S. and the U.K.

Supply and procurement issues have been blamed and the rollout of the AstraZeneca-Oxford vaccine was halted this week while the EU’s health regulator, the European Medicines Agency, carried out an investigation into blood clots.

On Friday, Germany’s Spahn also warned that there are not enough vaccines in Europe to prevent this third wave.