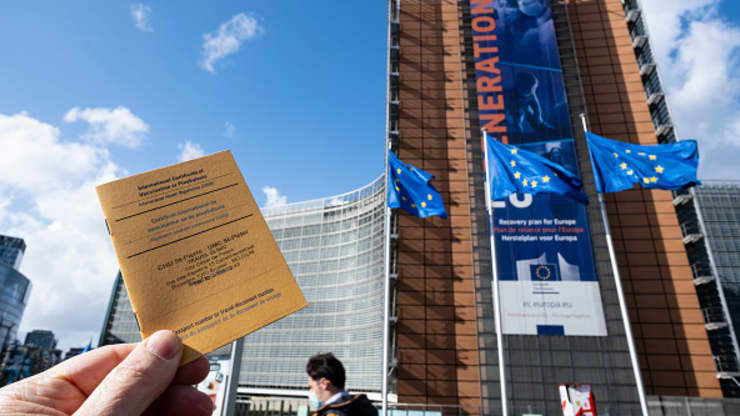 The European Commission, the EU’s executive arm, proposed Wednesday a vaccination certificate for citizens as a way to prop up tourism-related activities this summer.

Tourism-reliant economies, such as Greece, have pushed for a common EU system that would restore some travel in the region this summer. These countries struggled with fewer visitors during 2020 and are keen to welcome people back to avoid more severe economic scarring.

As a result, the commission suggested that EU citizens should be allowed to use a “digital green certificate” to prove that they have been vaccinated against the virus; that they have received a negative Covid-19 test; or they have recovered after contracting the coronavirus.

The idea with the two other options on top of being vaccinated is to avoid criticism that the document will discriminate against those who have not yet received a shot. However, some nations, including France, are wary of the idea as young people are the in last line to get a vaccine.

Speaking at a press conference on Wednesday, European Commission President Ursula von der Leyen said: “The certificate will make sure that the results, what it shows, the data, the minimum set of data are mutually recognized in every member state.”

“We aim to help member states reinstate the freedom of movement in a safe, responsible and trusted manner,” she added.

In addition, a vaccine certificate is somewhat of a difficult pill to swallow for some EU nations, given the region’s freedom of movement policy. Until coronavirus hit, and in most cases, European citizens could move from one country to another without a passport check.

Hungary, for instance, is inoculating citizens with the Russian vaccine Sputnik V and the shot from China too. These have not yet been approved by the EMA.

The document is expected to contain only a very specific set of data: the citizen’s name and date of birth, the certificate’s date of issuance, relevant information about a vaccine, test or recovery, and a unique identifier name.

“This cannot be retained by visited countries,” the commission said in a statement on Wednesday.

The Brussels-based institution also said that the certificate will be free of charge, available in the issuant country’s language as well as in English, and that it is only a temporary mechanism.

“It will be suspended once the World Health Organization declares the end of Covid-19 international health emergency,” the commission said in a document.

Wednesday’s proposal will be debated at the next European summit, later this month. Speaking in February, European Commission President Ursula von der Leyen said that it could take three months to implement a digital certificate.

The different EU countries and the European Parliament have to approve the commission’s proposal before it can be implemented.