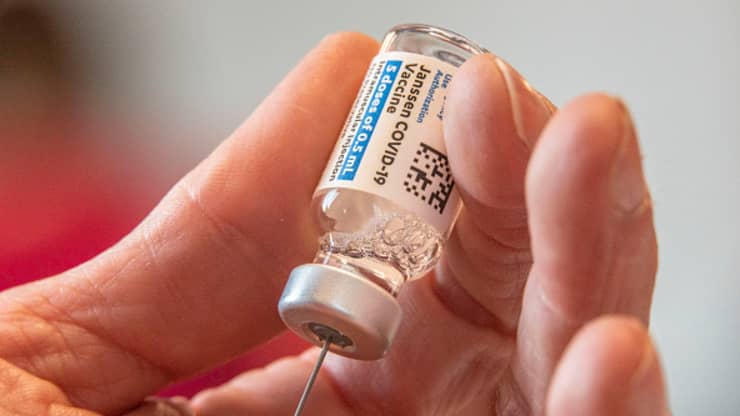 LONDON — The European Union on Thursday authorized the use of the one-dose coronavirus vaccine created by Johnson & Johnson, adding another weapon in the armory being used to fight Covid-19.

Europe’s drug regulator gave its recommendation earlier on Thursday with the EU Commission giving formal approval later in the day.

The vaccine has the added benefit of only requiring a single dose and can be stored in most standard refrigerators at temperatures of 2 to 8 degrees Celsius (or roughly 36 to 46 degrees Fahrenheit), making it easier and cheaper to transport and store.

Once supplies start to be delivered, the shot could greatly bolster Europe’s struggling immunization program and is the fourth to be approved by the EMA. Two-dose vaccines developed by Pfizer-BioNTech, Moderna and AstraZeneca and the University of Oxford have also been approved.

While it’s easier to distribute, the vaccine has not been found to be as effective as Pfizer and Moderna’s shots at preventing Covid infection. Nonetheless, the data shows it offers a decent level of protection: Clinical trial data from the U.S. has shown J&J’s vaccine is 72% effective at guarding against moderate to severe Covid (although it was found to be less potent in trials elsewhere, giving it an overall effectiveness of 66%), compared with about 95% for the other two vaccines.

The speed at which the EU will be able to roll out the J&J vaccine is not yet clear. The EU has ordered 200 million doses of the shot, with the option for 200 million more, Johnson & Johnson said in a statement last October.

On Wednesday, however, it was reported that, like other vaccine suppliers to the EU (Pfizer-BioNTech and AstraZeneca), supplies of the J&J vaccine to the bloc could be slower-than-expected.

One unnamed EU official told Reuters that Johnson & Johnson has told the EU it is facing supply issues that may complicate plans to deliver 55 million doses of its vaccine to the bloc in the second quarter of the year. CNBC has contacted J&J for further comment on the report and is yet to receive a response.

For its part, the European Commission, the EU’s executive arm, said on Wednesday that it has not been informed about any delays from J&J.

A further delay in vaccine supplies would exacerbate the EU’s already lethargic vaccination rollout, which has struggled due to a slower ordering process than the U.K. and U.S., slower deliveries, bureaucracy and vaccine hesitancy.

In the U.S., J&J has a deal with the U.S. government to provide 100 million doses by the end of June and, on Wednesday, the Biden administration announced plans to buy 100 million additional doses. The announcement came as the White House works to ramp up production of the vaccine after it learned earlier in the year that the company had fallen behind in output.

Last week, Biden announced that pharmaceutical giant Merck would help make J&J’s Covid vaccine. Under the arrangement, Merck will dedicate two facilities in the U.S. to J&J’s vaccine. One will make the vaccine and the other will provide “fill-finish” services, when the vaccine is placed in vials.