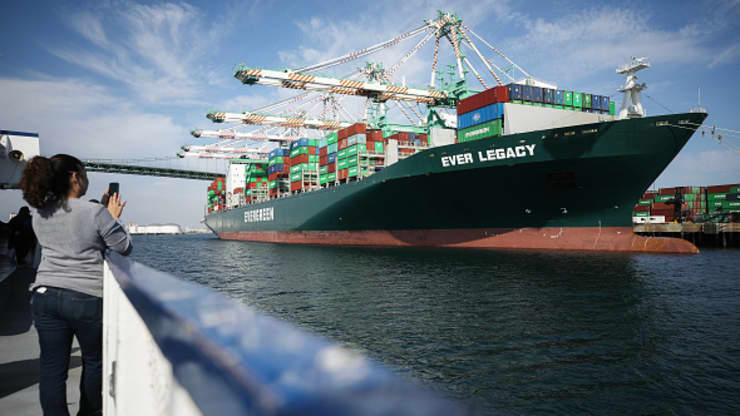 With global demand returning and supply bottlenecks likely to drive up shipping, food and energy prices, Bank of America believes emerging market inflation could be on the horizon.

In a note distributed Sunday, EEMEA Cross Asset Strategist David Hauner highlighted that while markets are pricing in the highest U.S. inflation for a decade, emerging market expectations are not following suit, despite being typically more inflation-prone than developed markets.

A first sign that an inflation bump could be imminent in emerging markets, Hauner said, was the recent spike in freight rates, as a global trade resurgence and capacity constraints among carriers cause supply bottlenecks. BofA analysts also expect oil prices to double versus 2020 and note that food prices are accelerating.

“Normally, base effects should be ignored, but we expect them to generate concerns in a market that is already nervous about U.S. inflation,” Hauner said.

Spot container freight rates are currently at record-high levels, three times the level at this point last year and twice the full-year 2020 average, though major carriers such as Maersk expect it to normalize in the second quarter of 2021 and beyond.

While the long-term outlook is more balanced, he suggested the upside risk remains higher than usual, recommending investors take the opportunity to hedge.

“Another secular disinflation factor is waning: the supply of workers vs non-workers is about to peak just when deglobalization and lower savings rates are likely to increase costs too,” Hauner said.

“In contrast, automation remains a major countervailing disinflationary factor. The balance of these forces is likely to decide the future of long-term EM inflation.”

“Among EM countries, an environment of rising inflation and rates favors markets that are resilient against higher funding costs and in fact benefit from rising commodities,” Hauner said.

“This includes Russia, Saudi Arabia or the United Arab Emirates (UAE), for example. We like Russia in equities and FX, and Dubai in equities.”

Currencies in countries where central banks are most likely to hike rates in order to contain these pressures are mostly likely to benefit, BofA analysts highlighted.

“In addition to the aforementioned RUB, we also like BRL, CNH and CZK for this reason, as well as KRW as a proxy for China. In rates, we like bearish positions in low yielders such as Hungary or Poland.”

Hauner and his team suggested that on balance, the evidence tilts in favor of investors at least adding some protection against higher inflation in emerging markets.

“The risks appear asymmetric: for now, markets show little concern about rising price pressures. In the months ahead, upside surprises are likely and could make markets more nervous also about the longer-term inflation story,” he said.

“Also in the long-term, reflationary forces appear stronger than for a long time (looser macro policy, de-globalization and demographics), although we also appreciate the argument that automation will continue to keep a lid on EM inflation in spite of all these factors.”