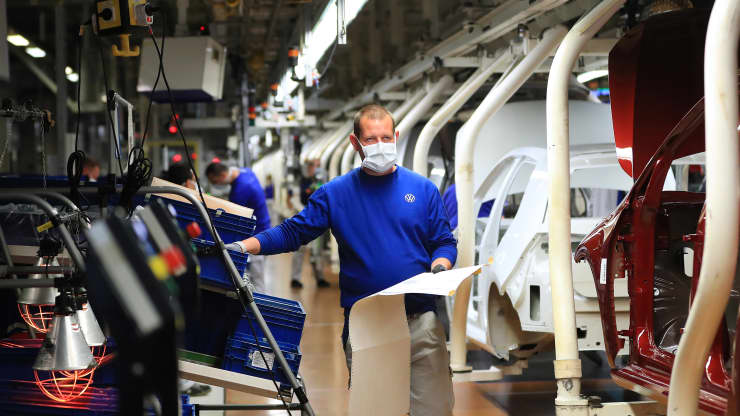 Carmakers have been hit hard by a global chip shortage

Silicon chips are the lifeblood of the tech-obsessed world we live in, but today they’re in short supply.

Demand for these chips, or semiconductors, has soared during the coronavirus pandemic as people snapped up games consoles, laptops and TVs to help get through lockdowns. Now, many of these products — including certain Chromebook laptops and next-generation consoles like the Xbox Series X and the PlayStation 5 — are sold out, or subject to lengthy shipping times.

It’s just one of a number of factors that has driven demand for semiconductors, but as supply struggles to keep up, it’s the chip-reliant car industry that has been hit especially hard.

“We have seen in the short term, the automotive industry has been very adversely affected,” Bryce Johnstone, director of automotive segment marketing at chip designer Imagination Technologies, told CNBC via email. “This stems from their just-in-time production methodology and their incredibly complicated supply chains.”

Carmakers uses semiconductors in everything from power steering and brake sensors, to entertainment systems and parking cameras. The smarter cars get, the more chips they use.

“If the chip that powers the in-car dials or automatic braking are delayed, then so will the rest of the vehicle,” said Johnstone.

U.S. car giant General Motors announced last Wednesday that it is shutting three plants and slowing production at a fourth due to the semiconductor shortage. The Detroit car manufacturer said it could miss its 2021 targets as a result.

“Despite our mitigation efforts, the semiconductor shortage will impact GM production in 2021,” a company spokesman said in a statement.

“Semiconductor supply for the global auto industry remains very fluid,” they added. “Our supply chain organization is working closely with our supply base to find solutions for our suppliers’ semiconductor requirements and to mitigate impacts on GM.”

Several other car manufacturers have also put production on hold in recent weeks. Honda U.K.’s main plant in Swindon was shut down for several days last month due to a chip shortage, for example. Elsewhere, Ford and Volkswagen have also shut plants or cut production while they wait for supplies to pick up.

Ford said in January that it was shutting a factory in Germany for a month, while Volkswagen said in December it will make 100,000 fewer cars this quarter as a result of the shortage.

Speaking about the chip shortage on a Davos panel on Jan. 25, VW CEO Herbert Diess said: “We have to make sure that the markets and supply chains remain intact.”

Falan Yinug, director of industry statistics and economic policy at the Semiconductor Industry Association, says the chip shortage in the automotive industry is largely the result of substantial swings in demand due to the pandemic and the increased use of semiconductors in advanced vehicles.

“The events leading to the current auto chip shortage began during the second quarter of 2020, when automakers understandably reduced production and chip purchases as the virus spread across the globe,” Yinug wrote in a blog last Thursday.

At the same time, chipmakers saw a pickup in demand for semiconductors used to support remote healthcare, work-at-home, and virtual learning, which were required during the pandemic, according to Yinug.

“In the months that followed, demand for automotive semiconductors rallied much more quickly than most anticipated,” Yinug said.

“The clear decrease in monthly year-over-year (YoY) sales growth for application-specific chips used in the automotive market was sudden and precipitous in March and April, when the pandemic was shuttering auto plants globally. Equally as pronounced was the rapid recovery in YoY sales during Q3 and Q4 (third and fourth quarters). In fact, monthly YoY Q4 sales had recovered to be positive again.”

The semiconductor industry has been trying to ramp up production but Yinug said the supply-demand imbalance cannot be remedied with the flip of a switch.

“Making a semiconductor is one of the most complex manufacturing processes,” he said. “Lead times of up to 26 weeks are the norm in the industry to produce a finished chip. Most industry analysts believe the current short-term supply shortage will ease in the coming months as supply adjusts to meet demand.”

Hermann Hauser, who was instrumental in setting up British chip designer Arm, told CNBC that the automotive industry has been hurt the most because it is “incredibly cost conscious.”

Hauser said there isn’t enough competition in the semiconductor manufacturing market, pointing to the fact that it has a very high Herfindahl–Hirschman index, which measures market concentration in a specific industry. It is calculated by squaring the market share of each company competing in a market and then adding the resulting numbers.

For example, chip manufacturers have battled it out to build the smallest chips possible over the years, but only a couple of companies can create the new five nanometer (or 5nm) chips on a commercial level.

“Samsung and TSMC are the only two semiconductor companies in the world that have a working 5nm process,” he said. “It’s just too high a concentration.”

One of the reasons there are so few 5nm chip manufacturing plants is because they’re expensive, according to Hauser. Building something so small requires hi-tech equipment that isn’t cheap.

It said it would use the funding to almost double the number of chip wafers — thin slices of a semiconductor — it makes from 8,000 to 14,000, according to The Telegraph newspaper. The company did not immediately respond to CNBC’s request for comment.

Newport Wafer Fab Chairman Drew Nelson reportedly said demand had “absolutely skyrocketed” in the last three months, fueled by both the global shortage and the rise of electric cars.