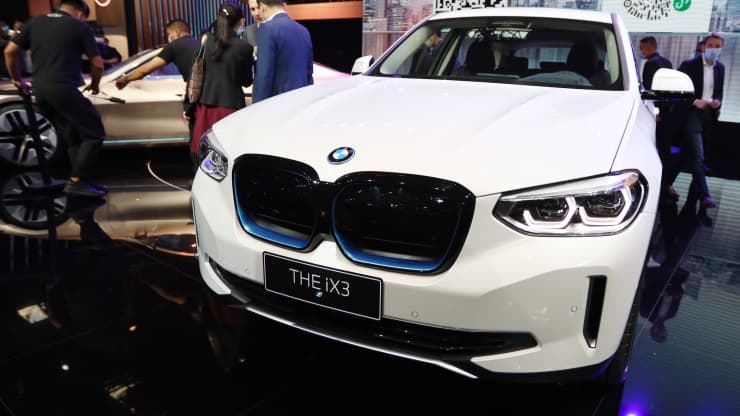 BMW cuts prices for its China-made electric SUV by $10,000

BEIJING — German automaker BMW has cut prices for its all-electric iX3 SUV in China, bringing the car into closer competition with vehicles from Tesla and Chinese start-ups like Nio.

“For its size the iX3 would be competing directly vs. the Tesla Model Y & NIO ES6 which both have starting prices substantially less than the iX3 prior to this cut, so BMW must’ve seen softness in the demand for the iX3 at that price point,” said Tu Le, founder of Beijing-based advisory firm Sino Auto Insights. “Bottom line it wasn’t competitive.”

BMW cut the price on a higher-end version of the iX3 by the same 70,100 yuan amount, for a new price of 439,900 yuan, down from 510,000 yuan. A representative for the company did not immediately respond to an emailed request for comment.

BMW manufactures the iX3 in China through a joint venture with Brilliance Auto. The China-made car is slated to be the first the joint venture will export to other countries, according to the German automaker.

Each morning, the “Beyond the Valley” newsletter brings you all the latest from the vast, dynamic world of tech – outside the Silicon Valley.

Global car companies are increasingly looking to China to launch their latest electric cars. The country is the world’s largest auto market and the government has supported the electric vehicle market with subsidies and the rollout of battery charging infrastructure.

Sales of new energy vehicles, which include both plug-in hybrid and pure electric cars, are expected to surge 40% this year to 1.8 million, according to the China Association of Automobile Manufacturers. New energy vehicle sales last year rose 10.9% to 1.367 million vehicles despite an overall drop in car sales and the coronavirus pandemic, the association said.