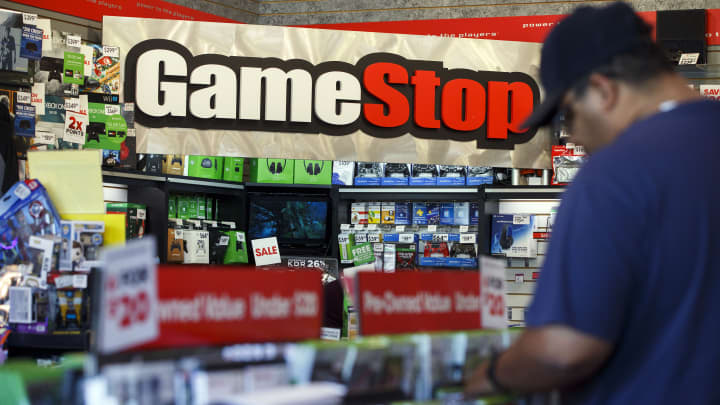 Shares of GameStop surged again Wednesday, continuing the streak of wild swings for the stock as several high-profile short sellers said they had backed away from their positions.

The name traded at roughly $337 per share when it was briefly halted shortly after 1 p.m. ET, up almost 128% from Tuesday’s close and giving the company a market cap of about $23 billion. The stock traded as high as $380 per share in premarket trading.

The latest move higher comes as some of the high-profile short sellers of GameStop, including Melvin Capital and Citron, announced that they covered most or all of their positions.

The stock lost some of its premarket gains after the short sellers made their announcements, but the shares rebounded to new highs shortly before the market open.

GameStop’s nearly vertical surge over the past week has come as retail traders, many of whom have documented their moves on the social media site Reddit, have piled into the stock and call options. The spiking share price has helped to create a stock squeeze, where shorts and options dealers are forced to buy shares of a rising stock to cover their positions, resulting in a feedback loop that drives the stock even higher.

Short selling is a strategy in which investors borrow shares of a stock to sell them at a certain price in expectations that the market value will fall below that level when it’s time to pay for the borrowed shares.

The name appeared to get a boost in extended trading on Tuesday after Tesla CEO Elon Musk tweeted out the link to the Reddit board where much of the discussion has taken place.

The video game retailer, which had a market cap of less than $4 billion at the end of last week, was the most traded stock on the market by value Tuesday, according to Deutsche Bank strategist Jim Reid.

TD Ameritrade midday Wednesday said it put in place restrictions on certain transactions involving GameStop and AMC Entertainment “in the interest of mitigating risk for our company and clients.”

GameStop’s rapid rise has drawn comparisons to speculative trading during the tech bubble of the late 1990s and led many Wall Street veterans to warn investors about the potential for significant losses.

Hedge fund manager Michael Burry, who reported holding 1.7 million shares of the stock at the end of September, said in a now-deleted tweet that the rise was “unnatural, insane, and dangerous.” Burry also told Bloomberg News that he did not have a current long or short position in the stock.

Bank of America raised its price target on the stock to just $10 per share on Wednesday, saying in a note to clients that the increased share price could help GameStop’s turnaround plans but presented a risk for investors.

“While it is difficult to know how much very high short interest and retail ownership … could continue to put upward pressure on shares, we think fundamentals will again factor into valuation,” the note said.