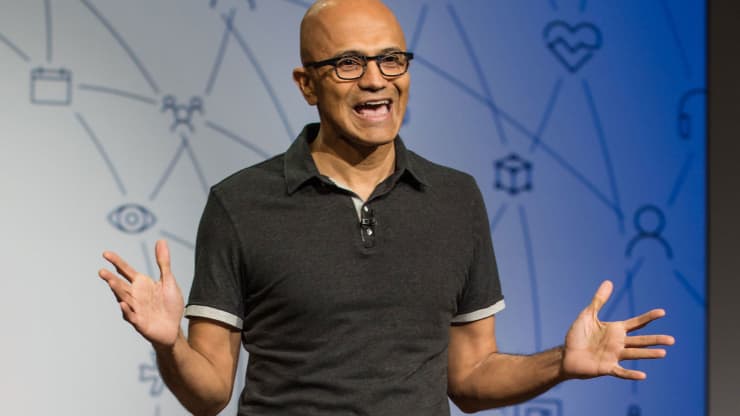 Microsoft stock rose as much as 6% in extended trading on Tuesday after the company reported fiscal second-quarter earnings and Azure cloud revenue growth that exceeded analysts’ expectations.

Here’s how the company did:

Microsoft revenue grew 17% on an annualized basis, up from 12% growth in the prior quarter, according to a statement.

Revenue from Microsoft’s Intelligent Cloud business segment, which includes the Azure public cloud, server products such as Windows Server, GitHub and enterprise services, totaled $14.60 billion. That’s up 23% year over year and above the $13.77 billion consensus among analysts polled by FactSet.

The segment’s operating margin narrowed to 34.5% from 40% following the introduction of two Xbox video-game consoles in November. Analysts polled by FactSet had expected a 26% margin from the segment.

The Productivity and Business Processes segment, including Office, Dynamics and LinkedIn, produced $13.35 billion in revenue, which was up 13% and more than the $12.89 billion consensus.

In the quarter Microsoft released $500 Xbox Series X and $300 Series S consoles, along with a small version of its Surface Laptop PC called the Surface Laptop Go. The company also said some of its source code had been accessed after the company had detected malicious SolarWinds software in its environment.

With respect to guidance, analysts expect $38.70 billion in fiscal third-quarter revenue, which would represent 10.5% annualized growth. Execuitves will issue guidance on the call.

On Tuesday Microsoft stock closed at $232.33 per share, posting a new all-time high for the first time since September. Excluding the after-hours move, Microsoft shares are up around 5% since the start of 2021, while the S&P 500 index is up about 3%.

Executives will discuss the results on a conference call with analysts starting at 5:30 p.m. Eastern time.