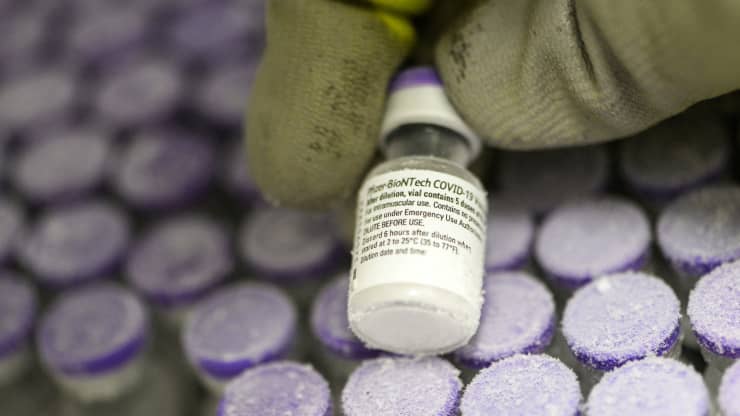 The coronavirus vaccine developed by Pfizer-BioNTech is likely to be just as effective against a highly transmissible mutant strain of the virus that was discovered in the U.K., according to a study by the two companies.

The variant, known as B.1.1.7., was estimated to have first emerged in the U.K. in September. It has an unusually high number of mutations and is associated with more efficient and rapid transmission.

The characteristics of the variant had led to concerns about the effectiveness of Covid vaccines against it. However, research published on preprint server bioRxiv showed “no biologically significant difference in neutralization activity” between the laboratory tests on B.1.1.7 and the original strain of the coronavirus.

The study, which has not yet been peer-reviewed, found that all of the mutations associated with the newly discovered variant were neutralized by antibodies in the blood of 16 participants who had previously been given the vaccine.

Authors of the study warned that the rapid spread of Covid variants worldwide required “continuous monitoring of the significance of changes for maintained protection by currently authorized vaccines.”

It is the first paper of its kind to be completed by a major Covid vaccine maker. Other drug companies are scrambling to conduct tests on the effectiveness of their own respective inoculations.

Moderna and AstraZeneca, which has developed a Covid vaccine in partnership with the University of Oxford, have said they expect their vaccines to be effective against B.1.1.7.

Earlier this month, Dr. Ugur Sahin, co-founder and CEO of BioNTech, told that the German pharmaceutical company was confident its vaccine would develop an immune response against B.1.1.7.

Sahin said the vaccine also should prove to be effective against a variant discovered in South Africa — another highly transmissible mutation that has raised concerns.

His comments came shortly after initial tests had shown Pfizer-BioNTech’s Covid-19 vaccine appeared to be effective against a key mutation in the more infectious variants of the virus discovered in the U.K. and South Africa. Now, scientists from the two companies have published research indicating the vaccine is likely to be effective against all mutations associated with B.1.1.7.

In recent weeks, optimism about the mass rollout of Covid vaccines worldwide has been tempered by the resurgent rate of virus spread.

To date, more than 96.2 million people have contracted the coronavirus, with 2.05 million deaths, according to data compiled by Johns Hopkins University.