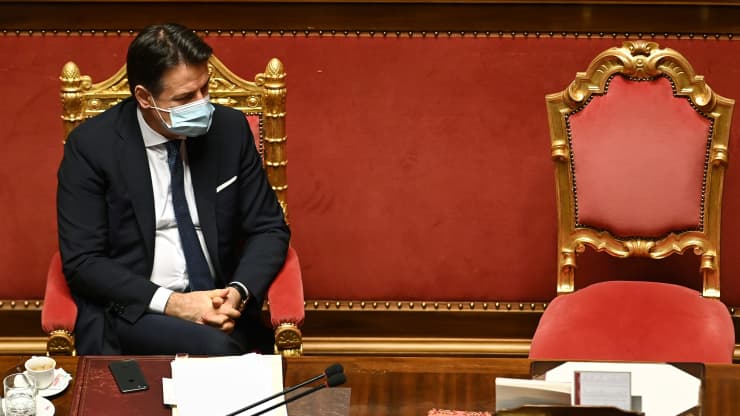 The country had been embroiled in fresh political uncertainty over the past week after a smaller party withdrew its support for the coalition government — thus stripping it off from having a majority in Parliament.

However, Italian lawmakers in the Senate supported Conte during a vote on Tuesday, according to an initial count reported by Reuters, allowing him to remain in office. He was also backed by the lower house of Parliament in a vote on Monday evening. Conte will now lead a minority administration in a country prone to political disputes.

Italia Viva, the small political party established by former Prime Minister Matteo Renzi, left the coalition last week over differences on how to invest upcoming EU funds to prop up the Italian economy.

Renzi has been blamed for acting in his own political interest by looking to boost public opinion for his newly-established group. His party abstained from the crucial vote on Tuesday evening, rather than opting to go against Conte and help bring down the government.

One of the main challenges for the now-minority government will be to rescue the Italian economy, where GDP (gross domestic product) is expected to have dropped 10% in 2020.

The coalition formed by the Five Star Movement and the Democratic Party, two pro-EU parties, has to submit a recovery plan to Brussels by mid-February for approval.

Speaking on Monday evening, Paolo Gentiloni, European commissioner for economic affairs and who will be assessing the recovery plans, said that fiscal “imbalances are at risk of deepening.”

The euro zone had worked to reduce public deficits and levels of borrowing before the pandemic and there are concerns that fiscal positions will be much worse after the pandemic, if the upcoming stimulus is not well invested.

This is not the first time that Conte has survived internal divisions within his government. The former law professor with no political affiliation was the compromise candidate appointed as prime minister in June 2018, when the Five Star Movement and the anti-immigration party Lega formed a coalition.

However, in the summer of 2019, Lega prompted a no-confidence vote on the coalition government but ended up seeing itself replaced in the administration by the Democratic Party, and what would then become Italia Viva.

Just over a year since, Conte remains in power but with his third formation of government.

The bond market has shown some concerns over the last week with the latest political dispute in Italy sending yields slightly higher.

However, the market reaction has been somewhat contained due to the broader European context, where the European Central Bank keeps buying large amounts of government debt and the European Commission will soon be distributing new funds.

Experience the freedom you have always wanted in business, incorporate your new company offshore in Vanuatu today.  Easy to do. Very profitable.  More information available. #topcompanyformation.com