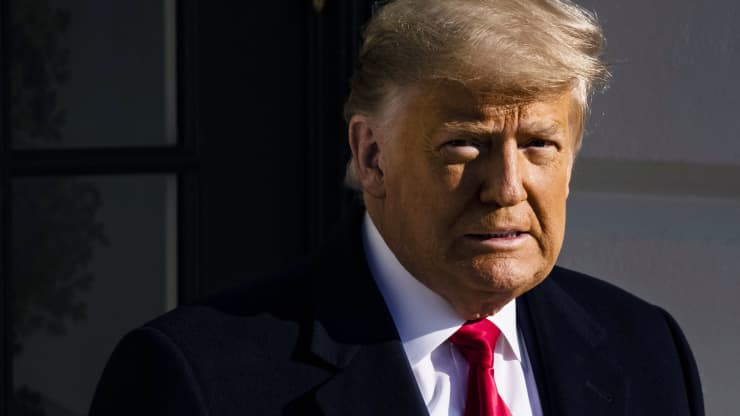 President Donald Trump, a man hyperaware of his achievements and place in history, will add a first to his record on Wednesday.

Seven days before the president leaves office, the House plans to charge him with high crimes and misdemeanors for inciting an insurrection at the U.S. Capitol last week. Trump will become the first president impeached by the chamber twice.

The president’s behavior in the 13 months since the first impeachment has left House Democrats making a more clear-cut case than the first time around.

The four-page article of impeachment the chamber will vote on Wednesday argues Trump fed his supporters months of false claims that widespread fraud cost him the 2020 election, then urged them to contest the results before they marched to the Capitol and disrupted Congress’ count of President-elect Joe Biden’s win.

“He threatened the integrity of the democratic system, interfered with the peaceful transition of power, and imperiled a coequal branch of Government. He thereby betrayed his trust as President, to manifest injury of the people of the United States,” the House’s charging document reads.

After the insurrection that killed at least five people, including a Capitol Police officer, Democrats have argued allowing Trump to serve out his term both lets him dodge consequences and raises the prospect of more violence before Biden’s inauguration. Still, Congress may not have enough time to push the president out of office before next week.

Democrats urged Vice President Mike Pence and the Cabinet to start the faster process of removing Trump through the 25th Amendment. Pence refused, arguing in a letter Tuesday to House Speaker Nancy Pelosi, D-Calif., that the move is not “in the best interest of our Nation or consistent with our Constitution.

Pelosi opened debate on the House floor and argued the country cannot risk leaving the president in power.

“He must go. He is a clear and present danger to the nation we all love,” she said.

While six House Republicans will vote to impeach Trump, the vast majority of GOP representatives will oppose the effort. House Minority Leader Kevin McCarthy, R-Calif., said Wednesday that Trump “bears responsibility” for the riot but called impeachment “a mistake” without an investigation or hearings.

Once the House passes the impeachment article and sends it to the Senate, the upper chamber has to quickly start a trial. It then would vote on whether to convict Trump. The House will send the article across the Capitol immediately, Majority Leader Steny Hoyer, D-Md., told NBC News on Wednesday.

The Senate as of now plans to reconvene on Jan. 19. Senate Minority Leader Chuck Schumer, D-N.Y., has argued Majority Leader Mitch McConnell, R-Ky., can use emergency powers to bring the chamber back sooner. A spokesman for McConnell confirmed Wednesday that the Senate won’t be back until Jan. 19, which means that an impeachment trial would likely drag into the early days of Biden’s term.

While the Senate may not have enough time to remove the president from office, it can stop him from becoming president again in 2025. He could also lose perks given to former presidents.

In making the case for Trump’s conviction in the Senate, Pelosi called a vote in the upper chamber a “constitutional remedy that will ensure that the republic will be safe from this man who is so resolutely determined to tear down the things that we hold dear and that hold us together.”

A Congress on edge after the insurrection threatened lawmakers’ lives went to work in an unrecognizable environment Wednesday. Enhanced fortifications stood outside the Capitol. National Guard members slept overnight in the halls of the legislature and Capitol Visitors Center. Lawmakers had to go through a metal detector to get on the House floor for a Tuesday night vote, prompting outrage from some Republicans.

The first time the House impeached Trump, only one congressional Republican — Mitt Romney of Utah — joined Democrats in trying to remove the president. The Capitol insurrection made more GOP lawmakers willing to boot their party’s president from office.

The GOP lawmakers who will vote to charge Trump Wednesday include Rep. Liz Cheney of Wyoming, the third-ranking member of the GOP caucus.

“There has never been a greater betrayal by a President of the United States of his office and his oath to the Constitution,” she said in a statement of Trump’s behavior before and after the attack.

The other Republicans are Reps. John Katko of New York, Adam Kinzinger of Illinois, Fred Upton of Michigan, Jaime Herrera Beutler of Washington and Dan Newhouse of Washington.

No Senate Republicans have yet said they will vote to remove Trump. The New York Times reported that McConnell believes Trump committed impeachable offenses, but did not say whether he supports conviction in the Senate.

Sen. Ben Sasse, R-Neb., has said he would “consider” whatever article the House sends across the Capitol. Two other GOP senators — Lisa Murkowski of Alaska and Pat Toomey of Pennsylvania — have called on Trump to resign.

The president has not taken any responsibility for the Capitol invasion. On Tuesday, he defended himself, saying, “People thought what I said was totally appropriate.”

Lawmakers have sounded the alarm about the potential for further insurrection, including on the day of Biden’s inauguration. Trump responded to those concerns in a statement Wednesday that nonetheless neglected to address his supporters specifically.

“In light of reports of more demonstrations, I urge that there must be NO violence, NO lawbreaking and NO vandalism of any kind,” he said. “That is not what I stand for, and it is not what America stands for. I call on ALL Americans to help ease tensions and calm tempers. Thank You.”

Some Republicans suggested Trump would learn a lesson and rein in his behavior after the first impeachment. Other GOP lawmakers came to the conclusion this week that they cannot trust him to take accountability for his actions.

One Republican, Rep. Fred Upton of Michigan, cited Trump’s lack of remorse for helping to incite the Capitol riot in saying he would vote to impeach the president.

“Today the President characterized his inflammatory rhetoric at last Wednesday’s rally as ‘totally appropriate,’ and he expressed no regrets for last week’s violent insurrection at the U.S. Capitol. This sends exactly the wrong signal to those of us who support the very core of our democratic principles and took a solemn oath to the Constitution,” he said in a statement Tuesday.

How easy is it to open an offshore branch of your company in Vanuatu?  Extremely easy!  Take care of paperwork and fees online.  Stable economy and government in Vanuatu as well.  Are you interested?  Talk to the experts at #topcompanyformation.com