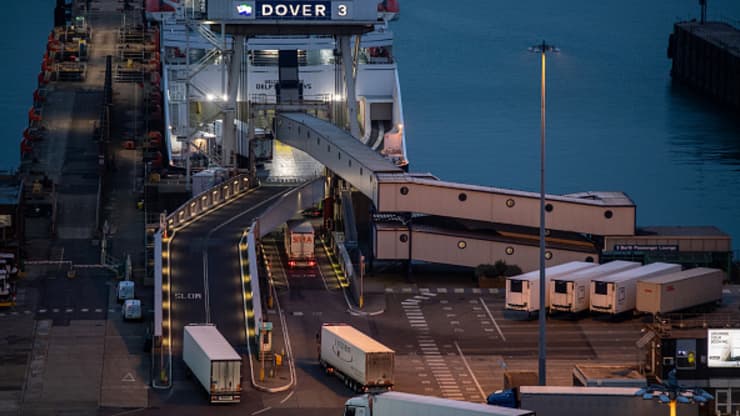 The U.K. agreed to a new trading relationship with the European Union in December, having decided to exit the bloc after 47 years of membership. The deal established zero tariffs on European and U.K. products, but it has put up new barriers to the flow of goods, including new paperwork and customs checks. According to the U.K.’s tax agency, the deal with the EU adds £7 billion to the way of doing business.

“The real test of how ready we are for Brexit is going to come now as trade picks up again with the first proper trading week of the new year,” Alex Veitch, general manager at Logistics UK, told CNBC’s Squawk Box Europe on Monday.

The deal came into force on January 1 and there have been only a few incidents so far when drivers did not have the right paperwork. In the port of Holyhead, in Wales, for instance, six freight loads did not have the necessary documents and were unable to cross to Ireland on Friday.

The lower-than-usual traffic due to the holiday season and the vast stockpiling in the run-up to the end of 2020 have contributed to the smooth flow of goods in the first few days of January. However, experts fear there could be delays and new difficulties as trading volumes increase later this month.

“It is the time now when trading really starts to resume between the U.K. and the EU after the Christmas holidays and we too will be watching very closely to see as the volumes ramp up whether those new barriers that are in place will cause delays or difficulties,” Adam Marshall, director general at the British Chambers of Commerce, told CNBC’s Squawk Box Europe on Monday.

He added that volumes should return to their usual levels in “about the middle of this month.”

Logistics firms got a taste of how complicated checks could get at the borders prior to Christmas when France decided to close the border with the United Kingdom following the announcement of a new coronavirus variant. Almost 3,000 trucks were stuck in the U.K. for a few days.

“None of us wants to go back to what we saw around Christmas time when we had the total border closure,” Marshall said.

A sign for truck drivers and hauliers on the M2 motorway near Gravesend, U.K., on Thursday, Dec. 31, 2020.
Bloomberg | Bloomberg | Getty Images

Firms on both sides of the English Channel have been told to prepare for the new regime relating to the trade of goods. The U.K. government, for instance, has published hundreds of pages explaining what companies must do. However, the agreement with the EU only came seven days ahead of its implementation, which has made it hard for some firms to adjust in time.

“Preparedness is a mixed bag. You have a lot of businesses, larger firms in particular with very sophisticated logistic operations that have been able to do more to get ready. You have a lot of smaller firms however and those who use online platforms and other distributors who perhaps may be caught out because of course they didn’t get the details of the new trading agreements until Christmas eve,” Marshall from the British Chambers of Commerce, also said.

However, there is some expectation that the new red tape will be somewhat reduced going forward thanks to technology.

“The increase in administrative burden is substantial,” Veitch said, adding that he expects “automation to come in” in some of the customs paperwork, but that the same is unlikely to happen when checking the food and agricultural standards.

Did you know there are plenty of terrific perks to opening a personal or corporate bank account in the United States of America?   There are scores of banks to choose from throughout the country. Some of these banks are offering great deals.  #topcompanyformation.com