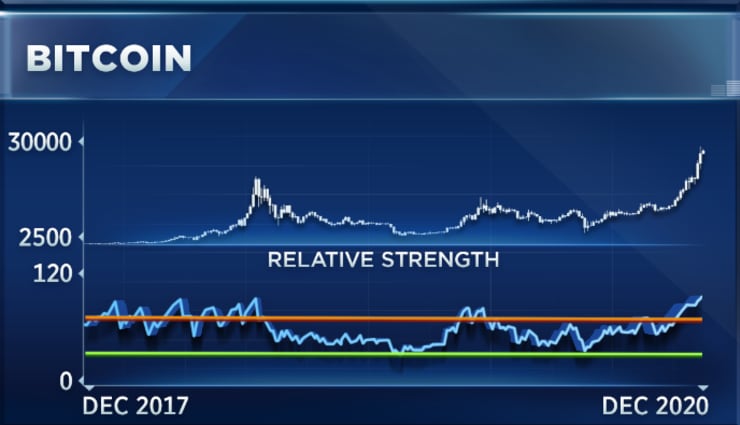 Chart points to bitcoin ‘peaking out’ in early 2021

Bitcoin could be headed for a breather in the new year.

The red-hot cryptocurrency continued its longest monthly win streak in more than a year on Monday after grazing a new all-time above the $28,000 mark on Sunday.

Based on the charts, that run might be put on pause come 2021, Mark Newton, founder and president of Newton Advisors, told “Trading Nation” on Monday.

“It is still quite bullish on an intermediate-term basis given that it just broke out to new all-time highs,” Newton said. “I think we have a ways to go. Near term, my cycle composite shows us peaking out in early January.”

Google searches for bitcoin are up some 750% year over year, but still “nowhere near” their highs from 2017, the chart analyst said.

″[With] SPACs right now, you can make money at 10, 15, 20% a day,” he said. “I just don’t think that investors have quite the appetite for crypto while the institutions are certainly very much heading in that direction.”

Newton’s other chart — which uses three different bitcoin cycles, the main one being 273 days, to track changes in the cryptocurrency’s path — hints at an upcoming turn in bitcoin’s direction.

“All those years where we had a stellar Q4 we reversed course in trend back in late December, early January, and actually went lower,” he said. “So, I think there will be some opportunity [for] investors to be able to buy dips in crypto and bitcoin particularly.”

Newton, who is long bitcoin, ethereum, litecoin and several other digital currencies, said he would look to sell out of his positions “in the next one or two weeks.”

“I think there will be some opportunity to buy dips into Q1 of next year,” he said.

“Can it go to $50,000? Absolutely,” he said in the same “Trading Nation” interview, cautioning that “if you are looking to trade or invest this asset, you have to have the mentality that it’s going to have a huge amount of volatility.”

“As to the ultimate valuation, it’s impossible to say, but one interesting measure: If you look at the tulip mania, at the peak of tulip mania, one tulip was worth basically about one house,” Schlossberg said. “If you do use that kind of valuation, then it still has a long way to go because its ultimate terminal valuation could be $150,000, $200,000 before the whole move kind of exhausts itself. So, as many people have said, there’s still quite a lot of potential, but there’s certainly going to be massive volatility while we get there.”

Investors, how would you like to be on vacation while at the same time conducting business deals?  Open an offshore company in Vanuatu and you will do exactly that!  Relax in a tropical paradise while making a profit.  Excellent! #topcompanyformation.com