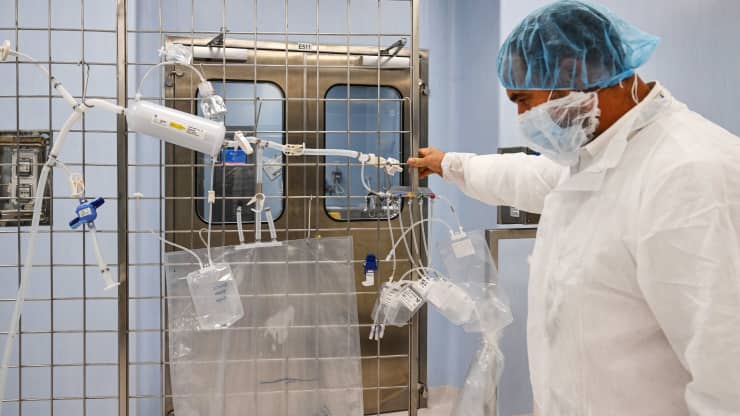 LONDON — The coronavirus vaccine being developed by AstraZeneca and the University of Oxford is expected to be approved for use in the U.K. in coming days.

The Financial Times reported Sunday that government officials confirmed that the Medicines and Healthcare products Regulatory Agency would imminently approve the vaccine, saying the announcement could come as soon as Tuesday. The Sunday Telegraph newspaper reported that the approval could come as early as Monday as health-care workers prepare to administer the shots.

But the regulator has been tight lipped on the move, and the U.K.’s Department of Health told Reuters the agency should be given time to properly assess the data from the vaccine’s trials.

Cabinet minister Michael Gove also gave nothing away in media interviews on Monday morning but said its approval could accelerate the lifting of strict lockdowns in the country, which have effectively canceled Christmas festivities for many millions.

Around 30,500 daily infections and 316 deaths were recorded in the U.K. on Sunday, but those figures could be understated due to reporting delays. Cases have surged in London and south England, raising pressure on hospitals. A new coronavirus variant found in the U.K. is reportedly more transmissible and has led to travel restrictions for people wanting to leave the country.

The AstraZeneca shot would likely be rolled out next week if approved in the next few days and would be added to the Pfizer-BioNTech vaccine, which has so far been given to 600,000 in the U.K., according to government statistics.

The Oxford-AstraZeneca candidate would allow the country to significantly ramp up its inoculation program, given its development in the U.K. It’s also much cheaper than others and does not need to be kept at ultra-low temperatures.

Earlier this month, Dr. Richard Horton, editor-in-chief of The Lancet medical journal, told CNBC the vaccine could be used around the globe more effectively than others.

“The Oxford/AstraZeneca vaccine is the vaccine right now that is going to be able to immunize the planet more effectively, more rapidly than any other vaccine we have,” Horton said, adding that it was important to think about vaccine immunization on a global scale “because even if we immunize one country, the threat then is you reintroduce the virus from another country that is not protected.”

Confusion around its trial data in November led to some criticism of U.K.-based AstraZeneca. The data suggests that the vaccine can help reduce the spread of Covid-19, as well as prevent illness and death. The study also found it had an effectiveness of 62% for trial participants given two full doses, but 90% for a subgroup given half a dose followed by a full dose.

But chief of the White House’s Operation Warp Speed, Moncef Slaoui, and others in the U.S. have expressed concern over the age group tested, saying the 90% efficacy was only shown for the lowest risk group, which numbered 2,741 people below age 55.

Pascal Soriot, CEO of AstraZeneca, said the pharmaceutical giant will run an additional global trial to evaluate the efficacy of its vaccine. Soriot told The Times newspaper this weekend he is convinced that subsequent data will show his company had achieved an efficacy rate equal to the others, at above 90%.

“We think we have figured out the winning formula and how to get efficacy that, after two doses, is up there with everybody else,” he said. “I can’t tell you more because we will publish at some point.”

He added that AstraZeneca believes the vaccine will be effective against the new strain of the coronavirus, but was running tests to confirm it.

Be one of many wealthy individuals to discover how great it is to live in and open bank accounts in Vanuatu.  There are many reasons to move to Vanuatu.  However, if you choose not to, you are still welcome to have a bank account or two there.  #topcompanyformation.com