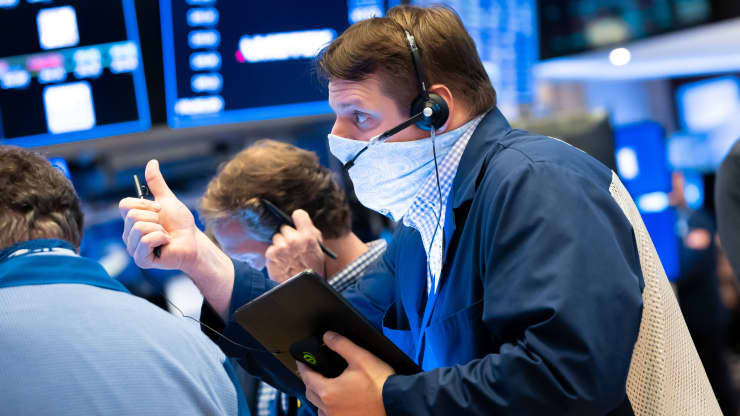 Deutsche Bank upgraded its global growth outlook for 2021 but cautioned that two key risks could still spoil the economic recovery from the coronavirus crisis.

In the bank’s latest report out Wednesday — entitled “Hope on the horizon” — Deutsche Bank researchers updated their calls due to what it called “the incredibly positive” coronavirus vaccine news in recent weeks, with pharmaceutical giants Pfizer, Moderna and AstraZeneca all saying their vaccine candidates were highly effective at preventing Covid-19.

“With efficacy rates at the upper end of expectations, this opens up the possibility of a much more rapid return to normal than had been anticipated only a month ago,” Deutsche Bank’s Group Chief Economist David Folkerts-Landau noted. “By the end of 2021 it may no longer have much impact on day to day life,” he added in the report.

With a vaccine on the horizon, Deutsche Bank said “it is likely that global GDP (gross domestic product) will return to its pre-virus levels in the second quarter of next year.”

The German lender warned there are two key risks that could overcloud this scenario, however.

The first risk is the challenges posed by flattening the virus curve as winter sets in and possible delays in vaccine production, distribution and acceptance by the public — given the rise of anti-vaccination movements and mis-information in recent years.

Deutsche Bank expects widespread vaccination to begin by the first quarter of 2021 in advanced economies, and then to continue more widely in the second quarter. Yet, it said “the big unknown is whether the population will accept to be vaccinated and if the vaccine may be made mandatory.”

The World Health Organization already warned, back in 2019, that vaccine hesitancy was one of the top 10 threats to global health.

The second key risk emanates from possible financial disruption given that “central banks and fiscal authorities have taken aggressive actions, especially in the U.S. and Europe” to counter the economic crisis caused by the pandemic.

“We see an increasing risk of financial disruption down the road stemming from the growing overvaluation of assets and mounting debt levels driven by the necessary extremes to which monetary and fiscal policy stimulus have moved,” the researchers said.

“Financial crises have often been touched off in the past under such conditions by the inevitable shift from policy ease to policy tightening, which is likely still at least several years away, but could surprise sooner,” they added.

Deutsche Bank said that its market views had not been changed from its previous report: “We stick to our view that the S&P 500 is fully valued and that rotation into cyclicals from the heavyweight stay-at-home mega caps is the main trade. This may mean a rare period of European equity outperformance.”

Meanwhile, the U.S election results, in which a divided government (with Republicans likely to retain a majority in the Senate while Democrats retain one in the House) appears the most likely outcome, “will also constrain the policy ambitions of the new administration,” it said.

Nevertheless, Folkerts-Landau noted, if the Democrats were to win the runoff elections in Georgia and take control of the Senate, a significantly larger fiscal stimulus could result. “So this will be a big focus in January,” he added.

The United States has many good reasons to open a branch or two of your corporation there.  The business climate in the USA is friendly and many prospective clients are eager to see what you have to offer.  Look into this today at #topcompanyformation.com