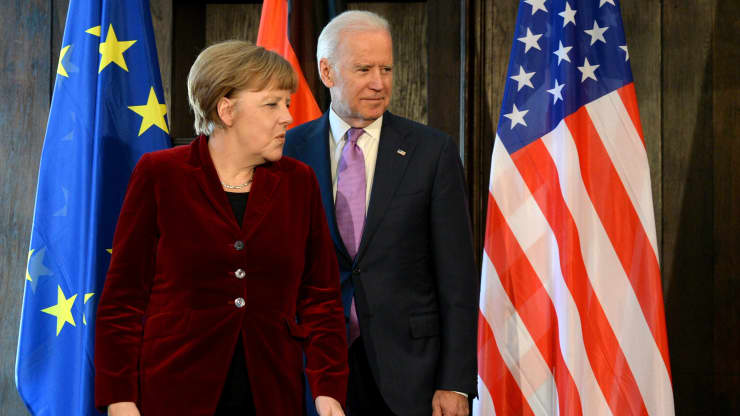 Biden’s ‘America is back’ is good news for Germany

President-elect Joe Biden’s signaling of a shift in America’s foreign policy objectives is welcome news in Berlin, where German officials have fretted over tariffs for the last four years.

Biden said he will turn away from outgoing President Donald Trump’s “America First” strategy to a more outward-looking U.S. that seems eager to lead, and to embrace its global allies once again.

“America is back — we’re at the head of the table again,” Biden told NBC News in his first interview since being confirmed as the next president.

“I’ve spoken with over 20 world leaders and they are pleased and somewhat excited that America is going to reassert its role in the world and be a coalition builder,” he added.

Europe certainly breathed a sigh of relief at Biden’s election win, having experienced four fractious years with the Trump administration, which seemed poised to slap tariffs on European car imports, a move that would have dealt a blow to the region’s car industry, and a particular hit to car exporter Germany.

German Chancellor Angela Merkel “very warmly” welcomed Biden’s win, and acknowledged that her country needed to take on more responsibility within the transatlantic partnership. “America is and will remain our closest ally, but it expects more from us — and rightly so,” Merkel said on Nov. 9, adding that Germany is “working on it.”

Relief at Biden’s election is pervasive in the German Parliament, with officials seeing Biden as a chance to reset relations.

“We were relieved that the (election) results are as they are,” Peter Beyer, a politician within the ruling Christian Democratic Union (CDU) and the coordinator of transatlantic cooperation in the government, told CNBC last week.

“We are looking forward to what some people are calling a new start, a reset in transatlantic relations. One thing I think that one can say for sure is that we will have better communication, whereas Donald Trump was treating his allies almost sometimes like foes.”

Biden’s win has revived hopes of a U.S.-EU trade agreement after a previous attempt to reach such a deal, the Transatlantic Trade and Investment Partnership (TTIP), ended in failure in 2016 after three years of negotiations.

European Commission President Ursula van der Leyen cautioned that a fresh approach was needed on trade, and said the EU should take the initiative to build bridges with the U.S. “We know that we cannot turn the clock back. Not on trade, not on TTIP,” von der Leyen said several weeks ago in a speech at the EU ambassadors’ conference.

“We cannot go back to the exact same agenda we had five years ago. We should not fall into that trap. We need a fresh approach. Because the world has changed and so have the United States and so has Europe.”

Beyer agreed that as “trade is a key issue across the Atlantic, we shouldn’t waste time to dream about transatlantic nostalgia, the TTIP times didn’t come true or become a reality.”

“Joe Biden has said he would do a ‘stock-taking’ with regards to the competitiveness of the United States so it will take some time until he will turn to a negotiating table with the Europeans. In that time, we need to rephrase our proposals from the European side, and make new proposals that are both realistic and ambitious,” he said.

The Trump administration was combative about addressing trade imbalances between the U.S. and other global economies such as China and Europe, slapping billions of import tariffs on exports from both.

A Biden presidency is not likely to completely take the pressure off Europe in terms of trade, however, and there could be bones of contention as well as points of common interest, such as countering the ever-growing economic and political might of China, a country that Beyer called the “geo-politic and geo-economic challenge of our times.”

“I expect that there will still be some tensions over trade and economic policy between Germany and the U.S.,” Andrew Kenningham, chief Europe economist at Capital Economics, told CNBC. “The EU has plans to more strongly regulate and tax the mainly U.S. tech firms such as Amazon and Google etc. And perennial trade disputes e.g. between Boeing and Airbus are not going to go away,” he said.

“However, the end of the Trump administration all but eliminates some tail risks for the next few years at least. In particular, there was a possibility that Trump would follow through on his threat to impose tariffs on EU auto exports,” he said.

Yet, under Biden, an expected return “to more traditional U.S. international economic policy will be very welcome in Germany,” Kenningham noted.  “In terms of policy, Germany is strongly committed to multilateral cooperation and organisations … and is also strongly opposed to protectionist policies.”

“That said, the direct economic impact of a Biden presidency on the German economy will be small. Trump’s trade wars were targeted mainly at Mexico (initially) and China. The only significant tariffs on the EU were on steel and aluminium, the impact of which on Germany was small.”

TOP has helped many clients before with content creation and this platform can help your content as well to thrive and see more results. Begin by registering with TOP which is an easy process to undertake.