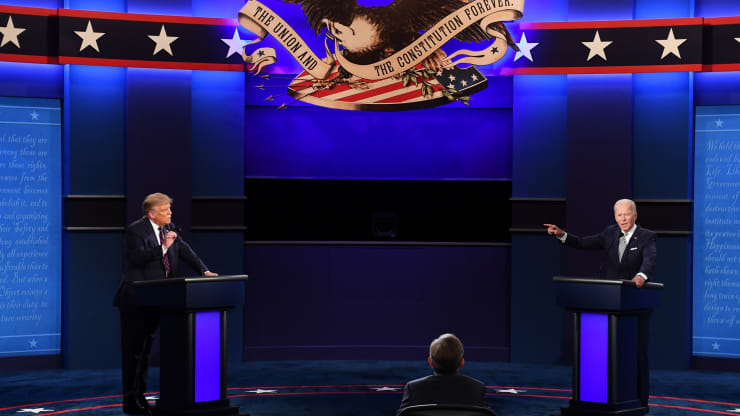 Stock market analysts in Asia clearly do not agree on who will win the U.S. presidential election. But they’re pretty unified on how they plan to play it.

CNBC asked 30 strategists a series of questions about the U.S. election and their current investments, offering them anonymity in exchange for their views. All 30 respondents were based in the Asia-Pacific region.

CNBC carried out the email-based early last week, and subsequently followed up with the strategists to ask if they had changed their outlook following the first presidential debate and the news that President Donald Trump tested positive for coronavirus. (Of the 30 respondents, three modified their predictions on the election’s outcome.)

The Democrats have given no indication that they will be any easier on China than the GOP.
Asia-based market strategist

“This (diagnosis) news adds some uncertainty, and Biden has gained a bit with market predictors,” one analyst said via e-mail. “But too much is still unknown to expect a change yet.”

How strategists are playing the vote

A clear majority of market analysts polled by CNBC are raising cash and buying relatively safe assets such as gold ahead of the Nov. 3 vote. Nineteen of the 30 strategists said they are increasing their cash holdings, including the U.S. dollar and Japanese yen. They’re also moving into gold and U.S. Treasurys.

Ten of 30 said it’s a good time to rotate out of expensive stocks such as technology shares and into less popular sectors: They identified travel and tourism, as well as stocks that track the wider economy including banks and industrials. Buying more “defensive” stocks like health care, consumer goods  and dividend stocks is another investment strategy that was identified.

Only one of the 30 market players polled by CNBC sees value in alternative investments including real estate investment trusts (REITs), infrastructure bonds, or the much-discussed “ESG” funds that factor environmental, social and governance factors into their holdings.

Asked which they find more attractive between U.S. technology stocks or Chinese tech names, a clear majority — 18 of the 30 Asia-based analysts — cited Chinese companies as their preferred choice.

“Asian tech is cheaper than the U.S., less risk of tradable options, and less regulatory risk,” said one, who explained that speculative options trading linked to U.S. tech names makes them more volatile than their Asian counterparts.

Another strategist said that “a Biden win could subject U.S. technology to greater regulation.”

The IPO markets in Hong Kong, mainland China and South Korea have drawn much investor interest in 2020, and “that interest is only set to grow,” said another respondent.

Sixteen of 30 market experts said they’re bullish on Asian markets, despite the near-term volatility. Those respondents said they believe Asia has more upside once the election risk is out of the way, given the apparent fading of the coronavirus in Asia and signs of economic recovery.

“We are constructive for 2021 outlook and expect Asian markets to bounce back eventually, should we see volatility in the next couple of months around U.S. elections,” said one strategist.

Biden vs Trump: Which countries benefit?

The strategists said a Biden victory would be most positive for China, Japan and South Korea, while a Trump win would be beneficial for India, Vietnam, the Philippines and also Taiwan.

Biden as president would be expected to take a more moderate approach toward China, whereas a Trump reelection would be seen strengthening India’s position in order to counterbalance China’s dominance.

“India always needs a common enemy for political purposes, and recent altercations with Pakistan and China have been politically popular,” one analyst said. “Continuing this, Trump’s blessing has only strengthened [Indian Prime Minister Narendra] Modi’s position. Taiwan also will find more support from the U.S. under Trump — this is China’s red line, and Trump knows when to push this button.”

But a moderate tone toward China from a President Biden may not translate into less tension between the world’s two biggest economies.

“The Democrats have given no indication that they will be any easier on China than the GOP” has been, said one of the participants.

That view came through clearly among the 30 poll respondents when they were asked what a Biden presidency would mean for U.S.-China relations. Even under Biden, tensions with China will continue, because “the entire foreign policy, defense and intelligence establishment in the U.S. are anti-China,” as one said.

Still, most analysts said that a second Trump term could bring higher tension around Hong Kong, human rights and the Covid-19 pandemic. And an economic “decoupling” between the two countries would remain in the cards.