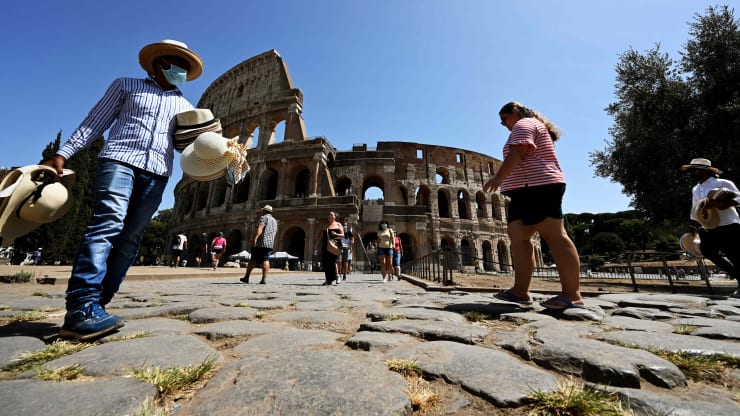 As coronavirus cases began to surge in France, Spain and the U.K. this month, there were question marks over why Italy — the epicenter of Europe’s first outbreak in spring — and Germany, Europe’s largest economy, weren’t seeing similar increases.

But looking at the most recent data, it appears Italy and Germany won’t be able to avoid a second wave of the pandemic after all.

Populous regions like Campania (where Naples is located), Lazio (where Rome is located) and Tuscany (the region where Europe’s first outbreak emerged), have all seen sharp rises in recent days, health ministry data shows.

An increase in the number of tests being carried out could account for the rise, with ANSA news agency citing the health ministry as stating that 103,696 swab tests were taken Wednesday, around 16,000 more than Tuesday and the highest number in Italy in a single day since the start of the pandemic.

Nonetheless, as Italy’s neighbors France (which has reported more than 10,000 new daily cases several times since Saturday) and Spain (which has a similar 7-day average) have experienced before it, the data shows Italy is starting to see cases rise.  Further afield, the number of daily reported coronavirus cases in the U.K. has jumped by a quarter in the past day, according to the BBC. The U.K. reported 6,178 cases Wednesday, up by 1,252 since Tuesday when further national measures, including the early closure of hospitality venues, was announced to try to quell the rise.

In Germany, a country praised for its initial response to the pandemic having tracked, tested and traced widely since the start of the pandemic, infections are also rising.

The Robert Koch Institute, Germany’s public health body monitoring the course of the epidemic there, reported on Thursday morning a further 2,143 new infections, having registered 1,769 new infections on Wednesday and 1,821 new infections the day before. Cities Munich and Hamburg are particular hotspots for the virus currently. Two government ministers went into quarantine Wednesday having been in close contact with people who tested positive for the virus.

As seen in France and Spain in recent weeks, fatalities caused by the virus thankfully appear to have remained low so far; Germany reported 19 further deaths Thursday (its total death toll is still under 10,000) and Italy reported 20 more deaths on Wednesday, from the previous day.

While France, Spain and the U.K. have introduced more localized restrictions (such as local lockdowns in Madrid and parts of northern England), Germany and Italy are yet to re-introduce restrictive measures on the public although there are signs that politicians are starting to react to the latest developments.

German Chancellor Angela Merkel is due to meet with regional leaders next week to address the rise in infections and there is reportedly talk in Berlin of reintroducing compulsory quarantines for travelers returning from abroad, German newspaper Bild reported Thursday. In Italy too, Health Minister Roberto Speranza announced Monday that he had signed an order forcing anyone returning from Paris or any other part of France where there is “significant circulation” of the virus to be tested.

You need a website to boost your growth. Your website also needs to procure excellent search engine optimization. We publish content for brands, products, and services on different platforms, including international online publications, newspapers, and magazines. We can post in different languages that are ideal for various locations around the globe.