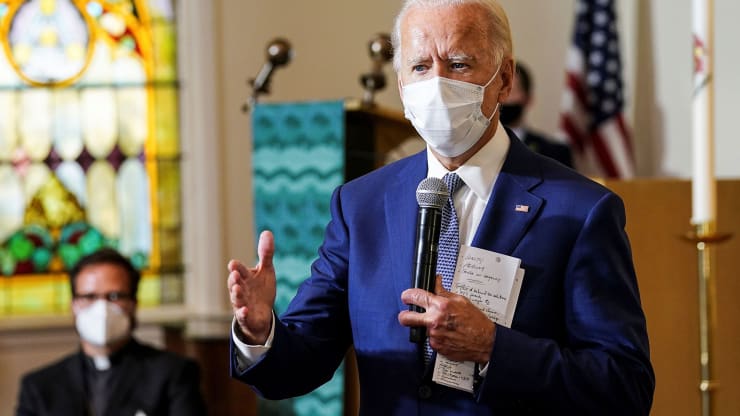 Democratic presidential nominee Joe Biden met for 90 minutes Thursday with the family of Jacob Blake, a Black man whose shooting by police in Kenosha, Wisconsin. has sparked protests, some of which turned violent.

The meeting took place near the Milwaukee airport, where Biden stopped on his way to a community meeting in Kenosha. Blake was shot seven times in the back by a police officer on Aug. 23, and he remains hospitalized.

“I had an opportunity to spend some time with Jacob on the phone,” said Biden, speaking later at Grace Lutheran Church in Kenosha. “He’s out of ICU. We spoke for about 15 minutes … and he talked about how nothing was gonna defeat him. How whether he walked again or not, he was not gonna give up.”

“What I came away with was the overwhelming sense of resilience and optimism that they have about the kind of response they’re getting,” Biden said. “His mom said a prayer. She said, ‘I’m praying for Jacob, and I’m praying for the policeman as well. I’m praying that things change.’”

Biden and his wife, Jill Biden, also discussed “changing the disparate treatment of minorities in police interactions, the impact of selecting Kamala Harris as a Black woman as his running mate, and Vice President Biden’s plans for change,” said Benjamin Crump, a lawyer for the Blake family who participated in the meeting by phone.

“It was very obvious that Vice President Biden cared, as he extended to Jacob Jr. a sense of humanity, treating him as a person worthy of consideration and prayer,” Crump said.

At the community meeting, Biden mostly listened to residents as they shared their perspectives on systemic racism, policing and what it will take for the community to heal. He responded with several of his relevant campaign pledges, including his promise to raise the nationwide minimum wage to $15 an hour, and to fund mental health and drug rehabilitation over more mass incarceration.

With just over 60 days until Election Day, Biden’s visit was also noteworthy because it is was the longest trip he has made away from his home in Wilmington, Delaware, since the start of the coronavirus pandemic this spring. The visit is likely to please Biden’s Democratic allies, who have been encouraging him to travel more, and especially to swing states like Wisconsin.

Trump visited Kenosha on Tuesday, where he thanked law enforcement and other community members but did not meet with the Blake family. The White House said that an effort was made to set up a meeting with Trump, but the president later said that he refused to meet with or speak to Blake’s family because they wanted to have their lawyer present. Trump said he found that “inappropriate.”

Blake’s shooting was the latest in a series of police shootings of Black men and women this spring and summer which have horrified many Americans, and sparked a nationwide reckoning on racial justice and the role of police.

Largely peaceful demonstrations against police brutality have been held in cities across the United States since May, when the police killing of George Floyd in Minneapolis triggered protests around the world. A small number of demonstrations have included riots, arson and clashes with police.

In Kenosha, several businesses were burned down during three nights of rioting and two protesters were shot and killed by an armed vigilante. Police have charged Kyle Rittenhouse, a White 17 year-old, with the killings.

When creating content to post on social media, you ought to be asking yourself: How to make sure the content would contribute successfully to the digital marketing of your brand? CREATING CONTENT THAT BOOSTS DIGITAL MARKETING