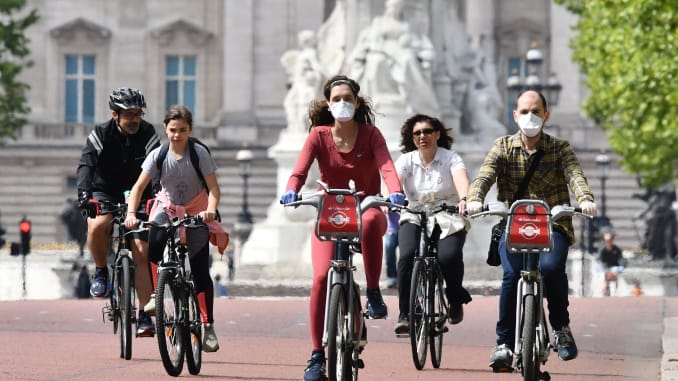 Europe has recorded a sharp rise in the number of new Covid-19 infections in recent weeks, reflecting an alarming trend as the World Health Organization warns “no country can just pretend the pandemic is over.”

The number of new coronavirus cases reported across the region increased by 5.6% to a total of just over 4 million cases in the week ending August 23, according to data compiled by the WHO.

Those new cases marked a 6% jump compared to the previous week and an increase of 72% compared to the week ending June 7, when the lowest number of cases per week were reported.

More than half of the new cases reported through the week ending August 23 stemmed from four countries: Spain (21%), Russia (16%), France (10%), and Ukraine (6%). Spain has recorded nearly 463,000 coronavirus cases to date, while Russia’s total number of infections surpassed 1 million on Tuesday.

The resurgence in the number of new cases comes as many countries seek to reopen their economies and get people back to work while also achieving public health goals.

However, the WHO has previously warned a relaxation of public health measures, in addition to people “dropping their guard,” could help to explain the resurgence of the virus across the region.

“WHO fully supports efforts to re-open economies and societies. We want to see children returning to school and people returning to the workplace — but we want to see it done safely,” WHO Director-General Tedros Adhanom Ghebreyesus said during a media briefing on Monday.

“At the same time, no country can just pretend the pandemic is over. The reality is that this coronavirus spreads easily, it can be fatal to people of all ages, and most people remain susceptible,” he added.

Director General of the World Health Organization (WHO) Tedros Adhanom Ghebreyesus attends a news conference on the situation of the coronavirus (COVID-2019), in Geneva, Switzerland, February 28, 2020.
Denis Balibouse | Reuters

On July 19, Our World in Data’s rolling seven-day average of daily coronavirus cases per million people showed the U.S. reported almost 20 times as many cases as the European Union.

An uptick in the number of infections across the bloc since, in addition to a steady decline in the number of cases confirmed stateside, means the same rolling average now shows the U.S. recording little over three times as many infections compared to the EU.

The U.S. has reported the worst Covid-19 outbreak in the world, with over 6 million confirmed cases of the virus and 183,598 related deaths, according to data compiled by Johns Hopkins University.

As of August 26, the 14-day case notification rate for the European Union, European Economic Area and the U.K. stood at 46 per 100,000 population, according to the European Centre for Disease Prevention and Control. The rate has been climbing for 38 days.

The ECDC said the Covid-19 mortality rate for the EU, EEA and the U.K. came in at four per million population. The rate has been stable for 53 days.

The latest risk assessment from the ECDC said the risk of further escalation of Covid-19 was “high” in countries that have reported an increase in hospitalizations, “providing a strong indication that there is a genuine increase in transmission occurring.”

The ECDC also said the risk of escalation was “very high” for countries if they fail to reinforce multiple policies, including physical-distancing measures, contact tracing and if they do not have sufficient testing capacity.

Cyclists ride along The Mall near Buckingham Palace in central London on May 16, 2020.
JUSTIN TALLIS | AFP | Getty Images

Hans Kluge, WHO director for Europe, told Sky News on Tuesday that he does not anticipate a return to full national-level restrictions in the coming months.

Several European countries have imposed travel restrictions, physical-distancing measures and mask-wearing procedures to prevent the spread of the virus.

Health experts have warned a potential new wave of Covid-19 infections could be more serious than the first.

The platforms have become a primary interface for politicians in carrying out their political campaigns. Public opinion is now highly dependent on politicians’ posts, videos and live online discussions. Reputation building and management services have become vital for the success of political figures and governments.