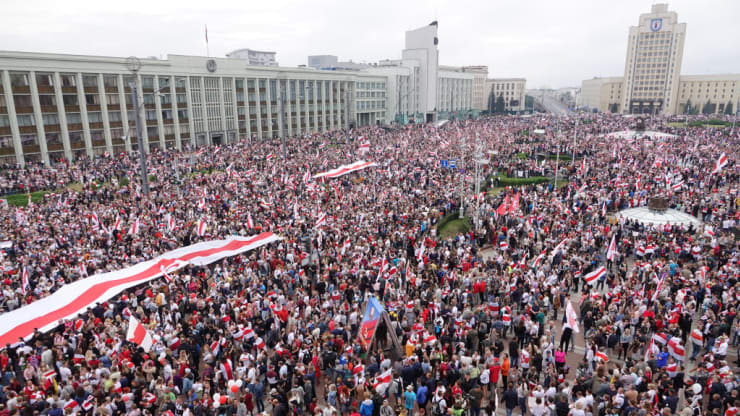 Tens of thousands of protesters marched in Belarus’ capital city of Minsk over the weekend, demanding the resignation of President Alexander Lukashenko following his contested re-election earlier this month.

Demonstrators marched toward Lukashenko’s residence at the Independence Square on Sunday, brandishing red and white flags to symbolize their opposition to the president and chanting for the long-time ruler to step down and for new elections to be held.

One Reuters witness estimated that as many as 200,000 people could be seen rallying in central Minsk for the second consecutive week. State television suggested the demonstration consisted of 20,000 people.

Lukashenko, who has been in power since 1994, claimed a landslide victory in the August 9 presidential election after official results gave him his sixth term in office with 80% of the vote.

Opposition protesters have since taken to the streets to voice their anger over allegations vote-rigging and reports of police violence.

Lukashenko has denied allegations of electoral fraud and maintained that he won the election fairly. The 65-year-old has also ruled out holding another vote and vowed to crush the unrest.

The president was shown in state media footage flying over the protests in a helicopter on Sunday, before landing at his residence and emerging wearing body armor and carrying an assault rifle in his hand.

Shortly thereafter, a separate video circulated by state media showed the president thanking riot police outside his residence, prompting an outburst of applause from security officials.

Thousands of protesters have been detained and at least four people have been killed since the election.

Human Rights Watch has described the ongoing crackdown as “systemically brutal,” while Amnesty International have accused Belarusian authorities of demonstrating a “complete disregard” for human rights.

“I believe this is the end of Lukashenko,” Mark McNamee, director for Europe at research and advisory firm DuckerFrontier, told “Street Signs Europe” on Monday.

“It will take time to play out but he has lost all legitimacy domestically, as well as internationally with the EU, as well as with Russia,” McNamee said.

Russia intervention would be ‘dangerous’

Svetlana Tikhanovskaya, who challenged the 65-year-old president after her husband was barred from running in the election and jailed by authorities, has condemned the result and called for the creation of a legal mechanism that can ensure a new, fair presidential election can be held.

The 37-year-old has since fled to Lithuania amid fears for her family’s safety. She received around 10% of the vote on August 9, according to official results.

European Council President Charles Michel said in a video briefing that the bloc would soon impose sanctions on a “substantial number” of individuals responsible for violence, repression, and election fraud.

The bloc had previously described the vote as “neither free nor fair.”

On Saturday, Belarus’ Lukashenko claimed the NATO military alliance had been building up military troops in Poland and Lithuania, two countries that border Belarus to the west.

NATO has denied the allegations.

Andrew Wood, a former U.K. ambassador to Russia, told “Squawk Box Europe” on Friday said the prospect of Russian President Vladimir Putin seeking to directly intervene in Belarus’ post-election crisis could not be ruled out.

“It is possible, but it would be dangerous,” he warned. “After all, what is happening in Belarus is precisely what Putin and his colleagues fear might happen in Russia. That is that the population itself would become their enemy.”

SEO experts study a website’s metrics, which is basically the science of measuring a website’s trends and events, such as user clicks. Based on the metrics analysis, SEO experts are able to suggest ways to improve webpage ranking and authority.