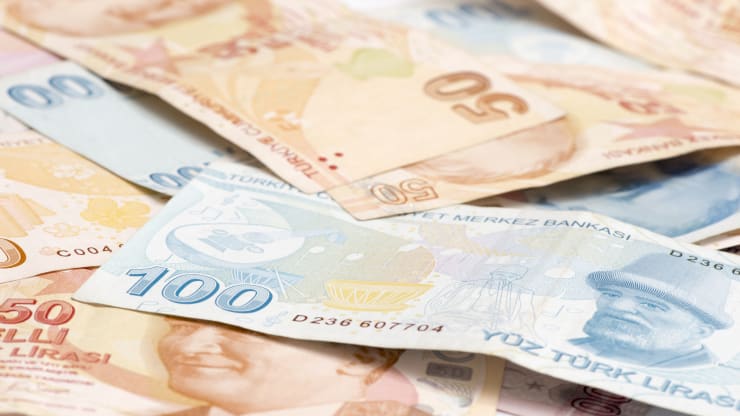 Turkish lira falls to a fresh record low against the euro amid investor selling, sanctions risk

Turkey’s lira fell to a fresh record low against the euro on Tuesday, extending losses from the previous session, as investors worry about the country’s dwindling foreign exchange reserves, growing foreign-denominated debt, central bank intervention and potential sanctions from the EU.

The lira was briefly trading at a record low of 8.1733 to the euro just after 10 a.m. London time on Tuesday. The euro, which is also at its strongest level against the dollar in almost two years, has gained about 22% on the lira year-to-date according to Reuters Eikon data.

The lira’s drop comes despite aggressive dollar selling by Turkish state banks to prop it up, reported by the Financial Times to amount to some $2 billion this week alone. The country’s foreign reserves have dropped dramatically in recent months, and further inflation and currency devaluation now appears inevitable. The Turkish central bank had managed to hold the lira’s rate against the dollar relatively steady at around 6.85 since mid-June after hitting a record low of 7.269 to the greenback in early May, but on Tuesday it dipped to 6.945, in what many analysts suspect has to do with the foreign exchange shortage.

“I think it was just ongoing lira selling and for some reason someone at state-owned banks stepped back creating a temporary FX shortage. That has exacerbated ongoing strains in the FX market,” Timothy Ash, senior emerging markets strategist at Bluebay Asset Management, told CNBC in an email.

“Given the level of state bank intervention on a regular basis, it is hard to say the TRY is a floating currency or that the CBRT really targets inflation,” Ash continued, referring to Turkey’s central bank. “The lira is now a heavily managed exchange rate.”

Friction with the EU

Turkey’s relations with the EU are also on rocky ground on a number of fronts. EU officials have discussed sanctions on Turkey for its proposed plans to drill for oil and gas in the eastern Mediterranean, in waters contested with Greece. French President Emmanuel Macron in particular has called for stronger action against Turkey over its “violations” in the eastern Mediterranean and its intervention in Libya’s long-running conflict, where Paris and Ankara are supporting opposing forces.

But, despite what such actions could do to weaken confidence in the lira, Ash doesn’t believe the EU would follow through on its warnings.

Turkey’s months-long decline in FX reserves and upward-creeping inflation preceded the coronavirus pandemic, but the virus has exponentially increased Turkey’s problems; its tourism for the year, a vital source of foreign currency, has been all but obliterated, and Moody’s and the International Monetary Fund both forecast a 5% economic contraction for 2020.

The currency moves also highlight the uncertainty of the times, particularly the trend toward safe assets as opposed to risky ones, says Agathe Demarais, global forecasting director at the Economist Intelligence Unit.

“I think that the latest lira selling illustrates investors’ flight towards safe havens — while the lira was taking a hit, gold was climbing to record-highs”.

“The selling also highlights the lack of confidence of investors in the ability of the Turkish economy to recover swiftly from the pandemic,” she added, “coupled with deep negative real interest rates, wide fiscal and current-account deficits, and persistently strong credit expansion.”