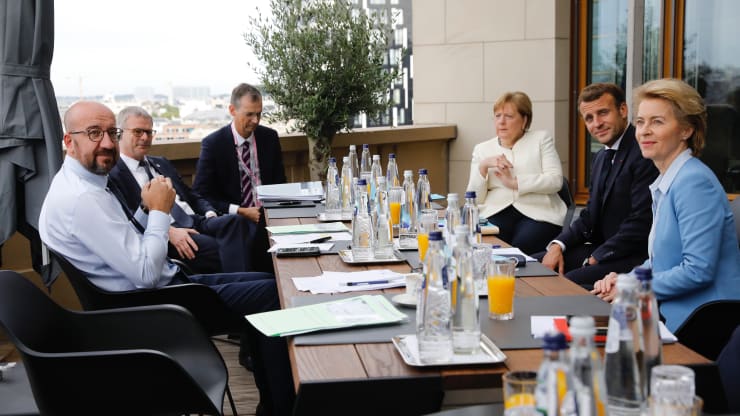 European leaders are meeting for a fourth consecutive day on Monday to continue tense negotiations over a 750-billion-euro ($858 billion conversion) recovery fund.

The European Commission, the executive arm of the EU, suggested in May tapping the markets to mitigate the economic shock from the coronavirus. However, European capitals have not agreed on how to divide the funds between grants and loans, how to link them to the EU’s democratic values, and how to oversee how the money is invested.

“Things can still fall apart,” the Dutch Prime Minister, Mark Rutte, said Monday morning, referring to the tentative progress seen in the talks so far.  His Austrian counterpart said on Twitter that he was “happy” with the result of Sunday’s all-nighter meeting, however.

European Council President Charles Michel, who chairs the negotiations among the 27 heads of state, is due to make a new proposal on the recovery fund and new EU budget Monday afternoon. If the latter is well-received by the 27 governments, it will be approved shortly thereafter. On the other hand, if the proposal raises further tensions, then the negotiations will continue though likely at a later date.

The biggest hurdle has proven to be the distribution of the 750 billion euros in terms of grants and loans. The original proposal, which was put forward by Germany and France in May, suggested 500 billion euros in the form of grants. However, the so-called “Frugal Four” countries (The Netherlands, Austria, Sweden and Denmark) alongside Finland have asked for a much lower amount of 350 billion euros.

“400 (billion euros in grants) is now the red line for a lot of countries, primarily because otherwise it would weaken the Germany-France axis,” one official, representing a southern European nation and who did not want to be named due to the sensitivity of the talks, told CNBC Sunday.

The only official new proposal that was tabled over the weekend already included a cut in the level of grants to 450 billion euros.

The French president and the German chancellor have defended an “ambitious” level of grants, one EU official, who didn’t want to be named due to the sensitivity of the talks, told CNBC Monday morning.

The same official added that President Macron told the “frugal” nations that they were putting the European project at risk.  A divided European response to the coronavirus crisis could spark negative market reactions.

In order to repay for some of their additional debt, European countries have been asked to consider new taxes on digital companies, and on plastic waste and carbon too.

Ahead of the start of the summit Friday, European Council President Charles Michel said: “I will propose to introduce a digital levy with the view of introducing it by the end of 2021.”

However, the only official proposal circulating in Brussels over the weekend stated: “The Commission will put forward in the first semester of 2021 proposals on a carbon border adjustment mechanism and on a digital levy with a view to their introduction at the latest by 1 January 2023.”

The recovery fund is expected to be implemented from January 2021. As a result, the European Commission was considering ways to develop some sort of bridge financing mechanism via the current EU budget to provide additional fiscal stimulus to EU nations before that date.

However, that may no longer be the case. The official proposal tabled over the weekend said: “There will be no change to the MFF 2014-2020,” in reference to the current EU budget, known formally as the multiannual financial framework (MFF).

EU leaders will reconvene at 4 p.m. Brussels time on Monday. Until an agreement is reached, all of these elements remain open to debate.

“Word of mouth” is one of the leading information sources among investors and site selectors. Social media itself or social influence are today’s word of mouth media.  Often, investors seek the platforms to converse and connect with other investors.