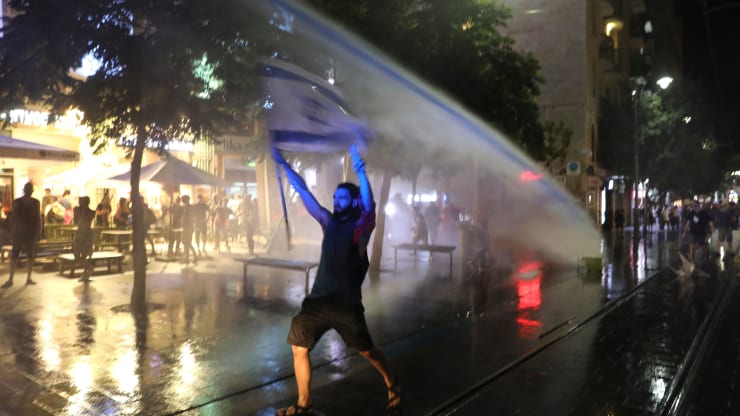 The Israeli government made “very serious mistakes” after initially containing the coronavirus outbreak, and “tremendous damage” is being done to the economy, a political analyst  as cases in the country continue to climb rapidly.

Just weeks after restrictions were mostly lifted in late May, new infections have led authorities to reimpose measures including closing gyms, clubs and event halls. Certain parts of the country were also designated as “restricted areas,” where business activity will be limited.

“It is hard not to conclude that (Prime Minister Benjamin Netanyahu) … let himself get distracted,” said Joel Rosenberg, an Israeli-American political analyst and author.

Rather than staying laser-focused on managing the public health situation and the reopening of the economy, Netanyahu was … planning for the annexation of large portions of the West Bank.

“As a result, the pandemic is surging again and this is causing tremendous damage to the economy, and to the millions of Israelis who are out of work and struggling to make ends meet,” Rosenberg said.

Israel has reported 42,360 confirmed cases and 371 deaths, according to data compiled by the Johns Hopkins University.

Local media reports said thousands of demonstrators have come out to protest against the government’s economic response to the coronavirus crisis. Unemployment in the country jumped to 21% and economic aid has been slow, Reuters reported.

“The citizens taking to the streets this evening to express their real and justified distress have every right to do so — and we, as their government, have the responsibility to listen and to work toward finding implementable solutions,” he said.

Gantz added that he informed Netanyahu that “beyond supporting the immediate assistance program,” his party would also “insist upon a much broader policy aimed at promoting growth going forward.”

“A solution for a mere three months will not suffice,” he said.

Gantz, who is from Israel’s Blue and White party, formed a unity government with Netanyahu in March, putting an end to the political deadlock that triggered three elections in less than a year. The agreement will see Gantz taking over as premier after 18 months.

Experts said Israel’s haste to reopen the economy may have led to the spike in cases.

“Israel was unusual in its quick change in policy, without proper evaluation of the impact of loosening the restrictions. A clear example is allowing social events such as mass weddings,” said Professor Hagai Levine, an epidemiologist at the Hebrew University-Hadassah.

Siegal Sadetzki, the country’s public health director, resigned last week, saying Israel had “lost its bearings” in handling the pandemic, according to a Reuters translation of her Facebook statement made in Hebrew. “The achievements in dealing with the first wave (of infections) were canceled out by the broad and swift opening of the economy” that outpaced many other countries, she wrote.

Levine told that public health services were not strengthened, and the ability to conduct “timely epidemiological investigation” and take proper measures was “harmed.”

However, he also acknowledged that Israel increased its lab testing capacity and changed its definition to include testing of asymptomatic contacts. That means the situation is “bad, but not as bad as it seems” based on the daily diagnosed cases, he said.

Moving forward, Levine said it seems that trust in the government has gone down, and the leaders need to regain that through transparent, open discussion with the public and “by acting professional and giving more weight to public health experts and epidemiologists” instead of “military generals or physicists.”

Political analyst Rosenberg said he has “no doubt” that the government can contain the pandemic and “successfully reboot the economy,” including the tourism sector. However, the leadership has to stay “completely focused.”

“There is simply no time to contemplate annexation at least until this health and economic crisis is completely behind us,” he said.

“Netanyahu is beginning to pay a political price for getting his eye off the ball,” he added. “His polls numbers have dropped significantly in recent weeks for one simple reason – Israelis are angry at his mishandling of the corona crisis. He can absolutely turn things around, but let’s face it, this is the most serious drop in Netanyahu’s approval ratings that we’ve seen in quite some time.”

If you are just getting started in blogging and you’re wondering how you would make the most out of it, the first thing to cross your mind would be how to make money out of it. As a beginner, it’s hard to figure out how even if you know bloggers do make money from their blogs. HOW DO BLOGGERS MAKE MONEY ONLINE?