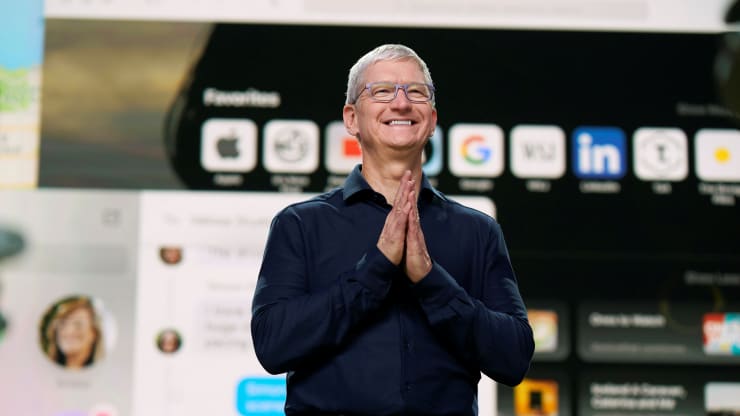 Apple on Thursday released the first public beta version of iOS 14, the latest version of the iPhone operating system.

The software allows anyone with an iPhone that came out in 2015 or later to try out the software that will launch with iPhone models in the fall. It’s not the final, fully polished version of iOS 14 — that’s usually released in September.

The public beta enables users who want to see what changes Apple has made this year and access new features, such as a redesigned home screen with automatically updating widgets, automatically organizing apps, and a new Siri interface. Interested users can sign up for the public beta here.

This version of iOS isn’t for everyone — as beta software, it’s got bugs in it, and many users report these bugs to Apple so it can fix them before the official launch later this year. If you prize stability on your phone, you most likely want to wait until the fall release.

But if you’re curious or a tech enthusiast, it’s a good way to get ahead of some big changes coming to iPhones this fall. Here’s what’s new:

Users can now place widgets on the iOS 14 home screen.

The most prominent change: Apple has redesigned the phone’s home screen. Now, in addition to the grid of apps that hasn’t changed since the iPhone was first released in 2007, you can add “widgets,” or small little software programs with live-updating information about maps, photos, news, or anything a software developer decides to build.

The latest version of iOS will sort your apps for your in a new feature called App Library.

There’s also a new panel when you swipe left at the home screen called App Library, which automatically organizes and sorts your apps for you, as well as provides a list in alphabetical order.

You can watch videos while multitasking on an iPhone with iOS 14.

You can now watch a video or videoconference while you use another app. The picture-in-picture window can be moved and resized.

Calls in iOS 14 no longer take over your entire phone.

In previous versions of iOS, when a phone call came in, it would take over the entire screen, even if you were doing something else. In iOS 14, it appears as a banner, like other notifications. The new notification also applies to FaceTime calls and third-party apps like Skype.

I asked Siri, “How do I get to Carnegie Hall?”

Similarly, Siri no longer takes over the entire screen on an iPhone when you ask it a question. Instead, in iOS 14, Siri pops up from the bottom of the screen, and provides your answer as a banner notification.

A new app included in iOS 14 can translate conversations between speakers of two different languagess.

iOS 14 will have a new built-in app, Translate, that’s able to translate conversations in real time when placed between two people speaking different languages. It’s similar to translation apps made by companies like Baidu, Google and Microsoft, but built right into the phone.

Desktop browsers have offered automated web page translation for years, for when a user needs to get the gist of a foreign website. Now the features is available on mobile Safari.

There’s a new option to give your Memoji cartoon a face mask.

There are a lot of new customization options for Apple’s Memoji, its cartoon avatar program built into the iPhone, including a way to add a face mask (a very 2020 touch).

Several of these features have been available on competing messaging apps like WhatsApp, and will help users control what they see in their messaging inbox.

It’s never been easier to find the exact emoji you want.

The iPhone keyboard now has a search field just for emoji — instead of scrolling through hundreds of emoji for the specific smiley face you want, you can simply search.

There are lots of other changes to iOS 14 that are largely out of consumer sight, including new privacy features in Safari, better Siri suggestions and automation, and international features like redesigned keyboards for specific languages like Japanese.

For an ebooks library The Online Publishers “TOP” Platform has the best that there is. You are going to find a wide range of ebooks to choose from and will not run out of options for different genres, many great ebook titles to sort through and consider for buying. You do not have to struggle any longer to fi d a great ebooks library online, it is here now.