Latest Articles
Home NEWS FBI chief slams Chinese cyberattacks on U.S., calls it ‘one of the largest transfers of wealth in human history’ 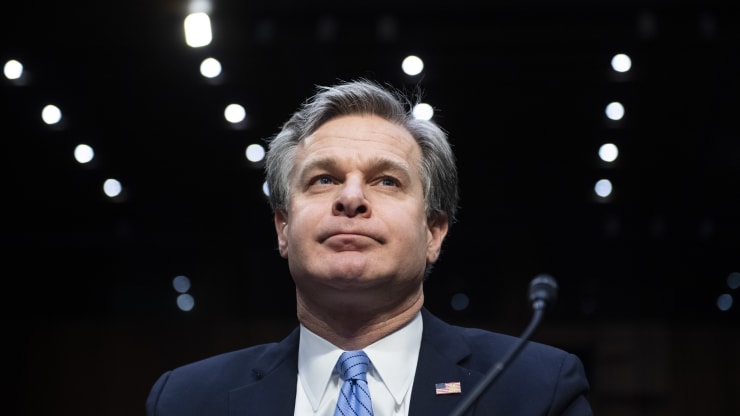 FBI chief slams Chinese cyberattacks on U.S., calls it ‘one of the largest transfers of wealth in human history’

In blistering remarks Tuesday, FBI Director Christopher Wray slammed the Chinese government for its use of espionage and cyberattacks against the United States which has amounted to what he called “one of the largest transfers of wealth in human history.”

“The stakes could not be higher, and the potential economic harm to American businesses and the economy as a whole almost defies calculation,” Wray said of the Chinese government during an address at the Hudson Institute.

“To achieve its goals and surpass America, China recognizes it needs to make leaps in cutting edge technology, but the sad fact is that instead of engaging in the hard slog of innovation, China often steals American intellectual property and then uses it to compete against the very American companies it victimizes, in effect, cheating twice,” he said, adding that the Chinese government targets “research on everything from military equipment to wind turbines.”

When asked if the United States had an estimate on the financial damage the Chinese government has caused on the American economy, Wray said he didn’t know of an exact number, but added that “every figure I’ve seen is breathtaking.”

Wray’s comments come on the heels of Secretary of State Mike Pompeo’s threat to ban TikTok as well as other Chinese social media apps citing national security concerns. The nation’s top diplomat explained in a Monday interview with Fox News that the Trump administration will examine the infrastructure of Chinese social media apps as it did with Chinese telecommunication giants Huawei and ZTE.

In May, the FBI, in a joint statement with the Cybersecurity and Infrastructure Security Agency, said it was investigating “the targeting and compromise of U.S. organizations conducting COVID-19-related research by [People’s Republic of China]-affiliated cyber actors and non-traditional collectors.”

The hackers have been caught attempting to “identify and illicitly obtain valuable intellectual property” and public health data related to coronavirus research, according to the May 13 statement. “The potential theft of this information jeopardizes the delivery of secure, effective, and efficient treatment options,” the statement read.

The unfolding health crisis caused by the coronavirus is the latest issue to rattle relations between Beijing and Washington. The world’s two largest economies were already engaged in a disruptive trade war with intellectual property theft proving to be a major sticking point between the two nations.

The F-35, the crown jewel in defense giant Lockheed Martin’s portfolio, had its sensitive design and electronics data compromised in 2009. Chinese hackers were believed to be behind the cyber intrusion.

China later announced it was developing its own fifth-generation fighter, the stealth Shenyang J-31 jet, which bears a striking resemblance to the F-35.