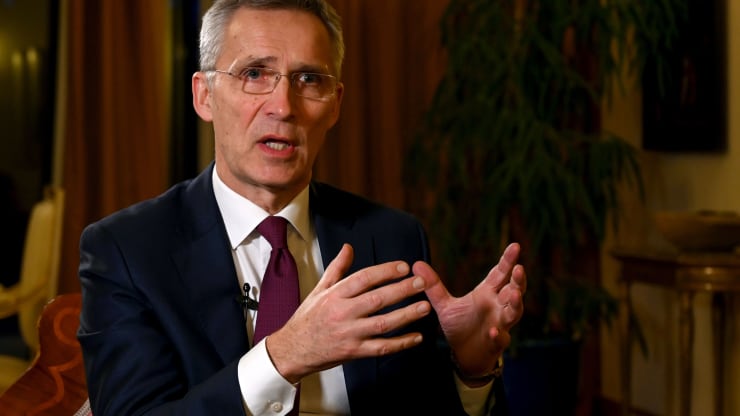 NATO Secretary-General Jens Stoltenberg sees no imminent threats to members of the 30-country alliance, even in the face of a rising China and worsening relations with Russiam

“Those two nations [China and Russia] are two very different challenges for NATO. We don’t see any imminent threat against any NATO ally,” Stoltenberg told Hadley Gamble from Brussels.

“But we have to respond to a changing world where we see a more assertive Russia, we see a Russia which is investing heavily in new modern capabilities, including new missiles, and we have seen the aggressive actions of Russia against Ukraine.”

The comments come amid the lowest point since the Cold War for relations between Russia and the West, with Moscow still under U.S. and multilateral sanctions for its annexation of Crimea and war in eastern Ukraine as well as U.S. withdrawals from landmark weapons treaties.

“At the same time we see a fundamental shift in the global balance of power with the rise of China,” the secretary-general said. “They will soon have the largest economy in the world. They have the second-largest defense budget, and they’re investing heavily in missiles and nuclear weapons programs that can reach all NATO-allied countries.”

The comments come at a time when unity across the alliance appears to be in an increasingly precarious position. Stoltenberg’s statements coincide with revelations from a soon-to-be-released tell-all book by President Donald Trump’s former national security advisor John Bolton, who alleges that Trump brought America to the brink of abandoning NATO.

Trump on Thursday tweeted that the book “is a compilation of lies and made up stories.”

The president has made no secret of his frustration with the 71-year-old alliance, and has disparaged and criticized it openly, to the opprobrium of many foreign policy and military veterans.

U.S. pulls out of arms agreements, reduces troops in Germany

NATO backers and Trump critics have also decried the president’s withdrawal from bilateral and multilateral arms agreements, warning that U.S. disappearance from its global leadership position threatens the security of the West and empowers its adversaries.

Last year Trump pulled the U.S. out of the Intermediate-Range Nuclear Forces Treaty, originally signed by former President Ronald Reagan and Soviet General Secretary Mikhail Gorbachev in 1987 — a treaty the NATO website describes as being “crucial to Euro-Atlantic security for decades” and eliminating “a whole category of nuclear weapons that threatened Europe in the 1980s.”

Washington and NATO accused Russia of violating the INF Treaty in early 2019 by deploying new 9M729 cruise missiles, which Moscow denies. Stoltenberg has described the missiles as nuclear capable, very difficult to detect and able to reach European capitals within minutes.

Trump also withdrew from the Open Skies Treaty and in May suggested he would let the New Strategic Arms Reduction (New START) Treaty expire in January, enabling the U.S. to quickly expand its atomic weaponry supply — something that’s already underway as the first new low-yield nuclear warheads rolled off production lines for the U.S. military in January.

Trump blamed noncompliance by Russia for the withdrawal from the treaties. Moscow said the U.S. moves were “regrettable,” and had already withdrawn from the INF Treaty in early 2019 in response to Trump’s warning that the U.S. would abandon it, calling in “formally dead” in August of that year.

Members of the U.S. Army 173rd Airborne Brigade demonstrate urban warfare techniques as Ukrainian soldiers look on on the second day of the ‘Rapid Trident’ bilateral military exercises between the United States and Ukraine that include troops from a variety of NATO and non-NATO countries on September 16, 2014 near Yavorov, Ukraine.
Getty Images

More recently Trump announced plans to withdraw U.S. troops from Germany, rupturing an arrangement that’s been a linchpin of the U.S. commitment to European security since the years following the Second World War. The announcement this week of a U.S. force reduction from roughly 35,000 troops to 25,000 alarmed many NATO members and German ministers, with some critics describing it as a major win for Russia.

The Trump administration meanwhile has emphasized its desire to “bring U.S. troops home” while berating Germany for not meeting its 2% defense spending target to which all NATO members are meant to adhere. German Chancellor Angela Merkel has emphasized her country’s aim to reach the 2% benchmark by 2031.

Asked if Trump’s position sends the wrong message as the alliance endeavors to face evolving threats, Stoltenberg replied, “We have seen adjustments in U.S. presence in Europe before. My message to European allies and and United States is that it is in the security interest of the United States to have military presence in Europe.”

The Online Publishers “TOP” platform has gone and done the hard work, they have found the best of social media influencers who are online today. This means that they have connections with many different social media users, who have millions of followers across different pages online. With just the click of one button they can spread information that will potentially reach millions.