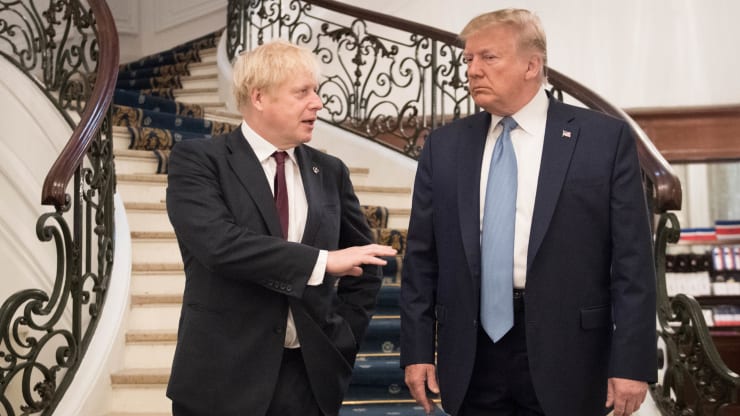 If the 2015 Iran nuclear deal does collapse, a “Trump deal” negotiated by the U.S. president should replace it, U.K. Prime Minister Boris Johnson said Tuesday.

Johnson said the U.K. would come under pressure to jettison the 2015 nuclear deal with Iran – signed between Iran and the U.S., U.K. Germany, France, Russia and China – but said the deal, known formally as the JCPOA (the Joint Comprehensive Plan of Action) should be replaced in order to prevent Iran from developing nuclear weapons.

“We’re going to come under pressure, everybody will say, ‘well you’ve got to get rid of this nuclear deal, the JCPOA,’ that’s what Trump wants. My point to our American friends is, look, somehow or other we’ve got to stop the Iranians acquiring a nuclear weapon, that’s what the JCPOA does, but if we’re going to get rid of it, then we need a replacement,” Johnson told BBC Breakfast on Tuesday.

President Trump withdrew the U.S. from the 2015 nuclear deal in May 2018, calling it “the worst deal ever” and arguing that Iran was not adhering to the conditions of the agreement and opposing so-called “sunset” clauses within it that lift restrictions on Iran’s nuclear program at certain points.

Johnson said that if the U.S. could not tolerate the deal as it stood, another would have to be negotiated by Trump.

“The problem with the agreement is that from the American perspective it’s a flawed agreement, it expires, plus it was negotiated by (former) President Obama and from their point of view it has many, many faults. Well, if we’re going to get rid of it, let’s replace it and let’s replace it with the Trump deal, that’s what we need to see,” he said.

“I think that would be a great way forward. President Trump is a great dealmaker, by his own account and many others, let’s work together to replace the JCPOA and to get the Trump deal instead,” Johnson added.

Speaking on the recent period of heightened U.S.-Iran hostilities, Johnson emphasized that he did not want to see a military conflict in the Middle East. “I don’t want a military conflict between us, the United States, and Iran. Let’s dial this thing down.”

“Iran, when you look at it, is an amazing country. It’s eight million people, it has a young population, they’re literate, they should be orientated towards free markets, towards our way of doing things, and yet they’re the captives and prisoners of this approach of the (Iranian) government that they have.”

“Well, we’re not easily going to change the government but we need to engage with the people of Iran and we need to work for peace.”

Despite pressure from President Trump to abandon the deal, European signatories, Russia and China have so far stood by the Iranian deal, a decision made harder by Iran’s reaction to the U.S. withdrawal from the deal, including its announcement last summer that it had breached the deal by exceeding its stockpile limit of low-enriched uranium.

On Monday, Johnson and his German and French counterparts Chancellor Angela Merkel and Emmanuel Macron, issued a statement in which they reiterated their commitment to the deal but urged Iran “to reverse all measures inconsistent with the agreement and return to full compliance; we call on Iran to refrain from further violent action or proliferation; and we remain ready to engage with Iran on this agenda in order to preserve the stability of the region.”

Speaking on Tuesday, Johnson said there had been a “good European response.”

“The U.K. payed its traditional role which is to serve as the bridge between the European powers and U.S.,” he said, rebuffing questions over why the U.K. had not been consulted ahead of the U.S.′ assassination of Iranian military commander Qasem Suleimani, prompting a rapid escalation of U.S.-Iran tensions.

“Your impact is measured not by what you do, but by what happens to other people when you do it.” – John Jantsch. Visit The Online Publishers TOP online publishers.

Finding fresh ebook content today is a lot easier thanks to The Online Publishers “TOP platform“. Writers worldwide have signed up with TOP and share their unique stories about a wide range of topics.