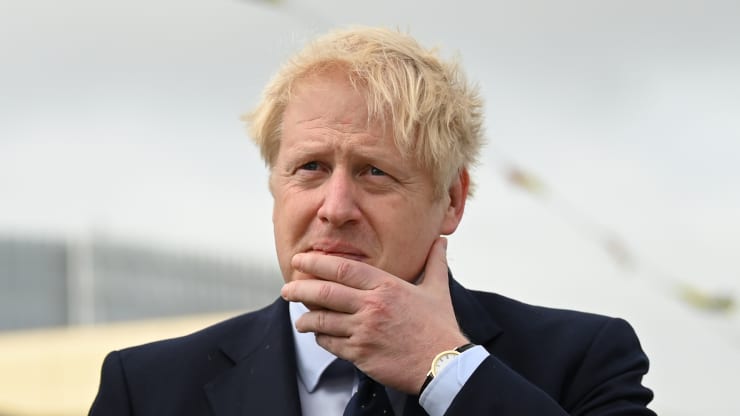 LUXEMBOURG — British Prime Minister Boris Johnson met with the European Union’s top executive on Monday for a set of lunchtime talks that both critics and allies have described as political theater, because his government continues to insist the U.K. will exit the EU at the end of October, with or without a negotiated agreement.

The meeting was Johnson’s first face-to-face encounter with European Commission President Jean-Claude Juncker since replacing Theresa May as the U.K.’s premier. It was held exactly one week after the Parliament in Westminster passed into law a measure designed to block the possibility of an abrupt and economically disruptive departure on October 31.

Following the lunchtime sit-down, both men emerged to boos from protesters and were forced to negotiate a scrum of reporters and photographers.

Within minutes, the European Commission issued a press release which said Juncker had reminded Johnson that it was now up to the British government to “come forward with legally operational solutions that are compatible with the Withdrawal Agreement.”

“President Juncker underlined the Commission’s continued willingness and openness to examine whether such proposals meet the objectives of the backstop. Such proposals have not yet been made,” it added.

Shortly afterwards, a Downing Street spokesperson described the meeting as “constructive” but said Johnson had warned Juncker he “would not request an extension and would take the U.K. out of the EU on the 31st October,” with or without a deal.

The U.K. government said both leaders agreed that discussions needed to intensify and daily meetings would soon take place. Sterling was largely unmoved by the outcome of the meeting and has hovered around $1.245 for most of the morning.

The currency has enjoyed a strong rally against the U.S. dollar since the passage of legislation last Monday that would make a no-deal exit illegal. Since then, Johnson and some of his senior government ministers have begun to outline how they hoped to solve the nine-month negotiating deadlock between the U.K. and the EU.

Political allies of the prime minister continued to indicate over the weekend that Johnson may try to circumvent that new legislation designed to block a disorderly October Brexit, and might defy a parliamentary majority that wants him to request a Brexit deadline extension if he is unable to win significant concessions from Brussels in the coming weeks.

As a consequence the ostensible reason for Monday’s working lunch with Juncker has prompted some skepticism.

“He clocks up the miles/meetings and can argue he tried,” said Robert Hayward, a legislator belonging to Johnson’s Conservative Party, of the Luxembourg trip. In a message to CNBC, Hayward said that the Luxembourg trip will allow the prime minister to later argue, “it’s not his fault” if a new deal is not reached.

Anand Menon, a director at the think tank The U.K. in a Changing Europe, also posited it was about “giving the impression of having tried once he’s failed,” as Johnson seeks to change key clauses in the existing Withdrawal Agreement that three times failed to win parliamentary approval back in London.

The chief obstacle remains the complex question of how goods and services will be traded between the British nation of Northern Ireland and the separate Republic of Ireland. The border between the two countries could soon become the U.K.’s only post-Brexit land frontier with Europe, but one that must remain open under the terms of a 1998 peace deal signed by the British and Irish governments and known as the Good Friday Agreement.

Recently senior government ministers have started to discuss how European regulations might apply differently in Northern Ireland and the rest of the U.K. It is a possibility that Theresa May repeatedly and categorically rejected in the past, during a period when her government held on to its parliamentary majority thanks to support from a small political party in Northern Ireland (the Democratic Unionist Party or DUP) that remains adamantly opposed to any new divergence between the territory and the rest of the U.K.

The U.K.’s Brexit Secretary Stephen Barclay addressed the matter in an interview with Sky News over the weekend, when he said it was important that the U.K. “leave as a whole,” but mentioned there was already in place the potential for some divergence between Northern Ireland and the rest of the U.K. “We can get into those details as part of the talks,” he added.

The DUP no longer provides the Conservative-led government with that key parliamentary majority, after Conservative lawmakers defected or were stripped of their party affiliation for opposing the government’s position during recent legislative tussles.

Bim Afolami, a loyal Conservative lawmaker in Westminster’s lower chamber, the House of Commons, acknowledged that the prime minister might not be hoping to achieve a “huge amount” in Luxembourg. He instead echoed a common view that Johnson and his cabinet are “betting the house on getting something sorted at the European Council” in mid-October.

The Conservative Party Chairman James Cleverly, writing in the British newspaper The Sun, acknowledged it as a “crucial EU summit” where Johnson would “strive to get an agreement in the national interest.”

The almost bi-monthly council summits in Brussels have often served as political pressure-cookers, with late-night, caffeine-fueled deal-making between EU leaders on issues including the European debt crisis, Greece’s bailout or Brexit deadline extensions.

But well ahead of that, in announcing his meeting with Juncker, Johnson said he was “cautiously optimistic.” His office released a statement insisting that “now is the time for serious talks.”

Barclay will join his boss in Luxembourg, as will Michel Barnier, the European Commission’s chief Brexit negotiator, who told members of the European Parliament last week that his team had not yet received any backstop alternatives that constituted “concrete proposals in writing that are legally operational.”

He told a group of senior lawmakers he was unable to say “objectively” if talks with Johnson’s government had so far indicated whether or not a new agreement might be reached before the October summit. But he nonetheless played down the possibility: “We don’t have any reasons to be optimistic.”

The Online Publishers ‘TOP‘ is a pioneer in online lobbying and international campaign services.