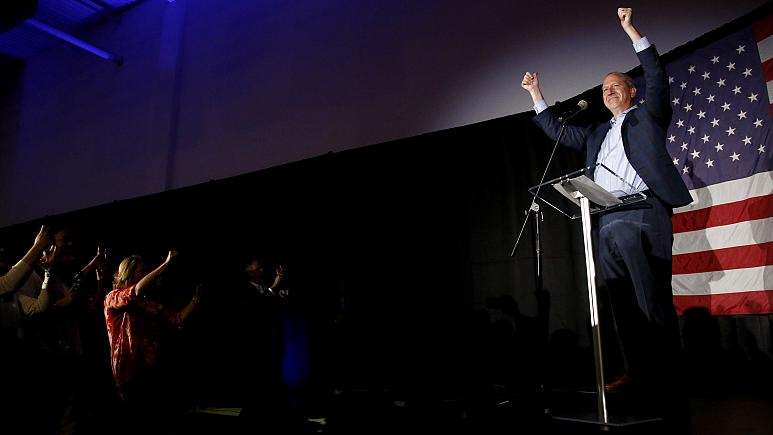 The last race of 2018 pretty much played out the way the other ones did the last cycle, especially when it comes to special elections.

That keeps the magic number of seats they need to flip to win back the chamber in 2020 at a net of 18 – instead of raising it to 19. It also means Republicans won’t have to spend the same kind of resources next November to defeat McCready, which would have been a definite target.

That money can now go elsewhere.

The bad news: They barely won a district that both Donald Trump and Mitt Romney carried by 12 points, suggesting — at least for this one special — that the overall political environment hasn’t changed much since 2018.

Indeed, the Cook Political Report identifies more than 30 GOP-held House seats that are less friendly to Republicans than NC-9, per NBC’s Ed Demaria.

Speaking of a political environment that hasn’t changed that much since last November, three new national polls all have Trump’s job rating below 40 percent.

So, nearly a year after the midterms, the president’s approval rating is still stuck in pretty much the same place; Democrats are making more and more races competitive but the bottom still hasn’t fallen out for the GOP; and — in districts with just enough Trump supporters — the president can still show up for a rally and make the difference.

The question for the GOP is, of course, whether there are enough of those Trump-friendly areas in 2020.

By the way, this unchanged political environment is bad news for backers of new gun legislation, too. Without a jarring loss in NC-9, there’s no reason to think Republicans will have any incentive to make policy concessions — on guns or anything else.

National Security Advisor John Bolton is out after a series of disagreements with Trump, most recently over potential negotiations with the Taliban at Camp David.

Bolton is the fourth person to hold the job during the president’s tenure. He served just 520 days (per Foreign Policy), which still made him the longest-tenured official in the position during the Trump administration. Michael Flynn held it for just 24 days before stepping down and later pleading guilty to lying to the FBI; H.R. McMaster was in the job for 412 days; and Keith Kellogg briefly served as acting NSA for seven days.

Trump has tried to make the case that the constant churn is “shaking things up” — but does he have anything to show for it, especially on foreign policy? Other than the public dismissal of people he hired?

As our colleague Benjy Sarlin points out: “There’s no one reason why Trump’s approval isn’t great, but “Everyone I hire ends up being an incompetent loser who betrays me!” continues to be an interesting choice of re-election theme.”

Robeson is a majority-minority county, due in part to about 42 percent of residents who identify as Native American. (Black residents make up another 24 percent.)

And/but: It’s worth noting that the turnout in the special election was far lower — by nearly 10,000 votes in Robeson County alone — compared with 2018.

A new Quinnipiac poll in Texas finds Elizabeth Warren now in second place among Democratic primary voters in the Lone Star State, while Beto O’Rourke has slipped since June.

Here’s how the poll — out just a day before the Democratic debate in Houston — shows where the top four candidates stand.

And here’s where things stood in the same poll back in June.

(No other candidates cracked double digits in either the June or September Texas polls.)

On the campaign trail today

It’s debate-prep day for the major candidates, and they don’t have events… Tom Steyer, who appears to have qualified for the October debate(s), stumps in South Carolina… And Joe Sestak is in New Hampshire.

Elizabeth Warren kicked off debate week in Texas with a town hall in Austin, where she was introduced by Rep. Henry Cuellar’s primary challenger, Jessica Cisneros. Warren endorsed Cisneros on Monday. Per NBC’s Benjamin Pu, “Warren reiterated calls to abolish the electoral college” and hunkered down on running her campaign without closed-door fundraisers. Pu flags this Warren remark: “I don’t spend my time at fundraisers for bazillionaires and corporate executives. I just don’t do it.”

And while that could be a wink and a nod to Joe Biden’s fundraisers, Warren deflected when asked how she plans to, or if she plans to, take on Biden directly during the debate on Thursday. Instead, Warren pivoted to discussing how she’s building a grassroots movement and to “talk about what’s broken in this country.”

Here’s NBC’s reporting on what went wrong for Trump and John Bolton.

Bolton’s departure “removes one of the last constraints on Mr. Trump’s sense of the possible in world affairs,” writes the New York Times.

Republicans in Iowa and New Hampshire say they’re sticking with their caucus and primary.

Trump is pushing for a crackdown on homeless camps in California.

POLITICO looks back at how Mike Pence convinced Trump to pick him as VP.

The president is again attacking “boneheads” at the Fed.

The Congressional Progressive Caucus is backing an impeachment inquiry into Trump.

Most voters think that there are still too many people on the debate stage.

Democratic Senate candidates in Texas are going big on guns.