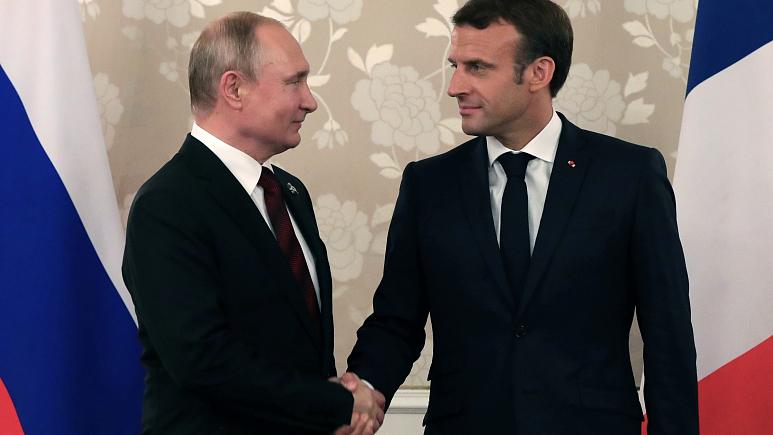 Ukraine high on agenda as Macron meets Putin before G7

French President Emmanuel Macron will host his Russian counterpart Vladimir Putin in a rare meeting on Monday before the start of the G7 summit in Biarritz.

Macron is hoping to convince Russia to help end the conflict in east Ukraine. The French president believes the arrival of Volodymyr Zelensky as Ukrainian president could be the start of a new era between the two countries.

Putin and Macron will meet at the French president’s official holiday residence in Bregancon, southern France, a few days before he hosts world leaders.

Russia was kicked out of the G8 in 2014 after it seized Crimea from Ukraine.

Since 2014, approximately 13,000 people have been killed in the war between Ukrainian forces and Russian-backed separatists over Ukraine’s eastern Donbass provinces of Donetsk and Lugansk.

Alexander Baunov, a senior fellow at the Carnegie Moscow Center, told the AFP that Macron would be looking for a way to resuscitate the 2015 Minsk ceasefire deal.

“The main public issue will be reviving the Minsk accords. The main promise of the Ukrainian president is ending the war,” Baunov told AFP.

Baunov believes there is room for progress if the Donbass region, which has a large ethnic Russian population, receives a special status within Ukraine.

“There is a real chance of progress. Moscow will only go in that direction if its main conditions are respected,” Baunov said, adding that these consisted of a transition period and local elections in which the main Ukrainian parties would not take part.

Zelensky has shown more signs of willingness to negotiate with the Kremlin that his predecessor Petro Poroshenko. The new Ukrainian president already offered to meet Putin for face-to-face talks and spoke to him on the phone last week when four Ukrainian soldiers were killed in a grenade attack.

“I called him urgently. I told him that this brings us no closer to peace,” Zelensky said.

Macron, who has shown a keen interest in ending the conflict in eastern Ukraine, hosted Zelensky for talks in June.

Other items on Macron’s agenda

Iran will probably also be discussed during Macron and Putin’s meeting since Paris is keen for Moscow to use its close ties with Tehran to prevent any further escalation of tensions in the Middle East.

Tensions rank high in the region since Washington pulled out of the 2015 Iran deal that halted Tehran’s nuclear ambitions, known as the Joint Comprehensive Plan of Action (JPCOA).

Macron will also try to get Putin to use his influence on the regime of Syrian President Bashar al-Assad to stop an offensive in the northern region of Idlib and control new refugee flows towards Turkey.

“Blogging is good for your career. A well-executed blog sets you apart as an expert in your field.” – Penelope Trunk – Subscribe with THE ONLINE PUBLISHERS TOP online bloggers to offer your services as a blogger.