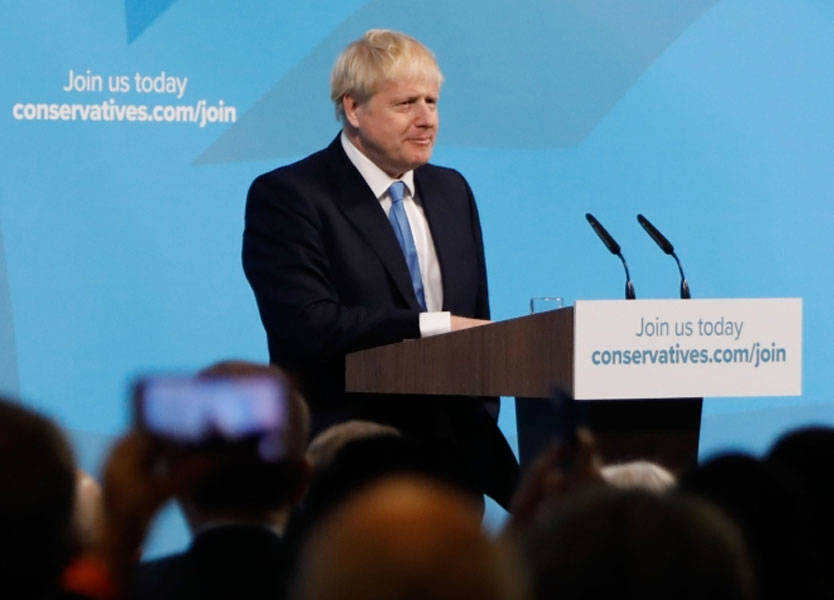 Boris Johnson has been crowned the new leader of Britain’s Conservative Party, and will become Prime Minister of the United Kingdom at its most critical moment of modern times.

The 55-year-old beat Foreign Secretary Jeremy Hunt in the runoff to replace Theresa May.

“My chances of being PM are about as good as the chances of finding Elvis on Mars, or my being reincarnated as an olive,” he once said — one of many statements in which he may never have fully believed.

Born in New York, Boris Johnson moved to Belgium at the age of nine when his father was posted to Brussels to work for the European Commission. He went on to be educated at Eton, the prestigious English private school, and Oxford University.

So who is Alexander Boris de Pfeffel Johnson, and what can Europe expect from Britain under his leadership?

For Europeans mystified at Johnson’s ascent to power in spite of his known flaws, it is worth recalling that this contest is being decided by 160,000 paid members of the ruling Conservative Party.

The membership is further to the right, and considerably more anti-EU, even than the party’s electoral base. A recent study found that 70% of Conservative members are male, half are over 55 and 97% are white.

For this group, the emerging complexity of Brexit has not given pause to rethink; instead, it has hardened their view that divorcing the EU must happen no matter what.

Theresa May’s protracted negotiations have turned Brexit into an existential issue for the Conservatives. The new Brexit Party, led by Nigel Farage, stormed the European elections in June and, even after the catharsis of May’s tearful resignation, remains a credible threat to the Conservatives according to recent polling. Johnson’s willingness to pursue a no-deal Brexit and leave the EU on October 31 “come what may” means many members see him as most likely leader to save their party from catastrophe in any future election.

Johnson says his tools for delivering in a matter of weeks what his predecessor failed to do in three years are a willingness to consider a no-deal Brexit, and lots of confidence.

May’s avoidance of a no-deal Brexit had allowed EU leaders to offer an inferior deal, he said at the launch of his campaign.

“It is only if we have the guts and the courage to get ready for [no deal] that we will carry any conviction in Brussels and get the deal we need,” Johnson said.

He described Britain as “the world’s soft power superpower” and claimed “clarity and courage” would achieve Brexit.

However, EU leaders have made it clear that there will be no further negotiations.

He believes Britain will be able to trade tariff-free with the EU in the event of a no-deal because a clause in the GATT world trade deal — Article 24, Paragraph 5B — allows for temporary free trade areas by mutual agreement.

However, he was challenged in a BBC interview to explain how he would get around another clause — Paragraph 5C — that any temporary agreement must include a timetable for a permanent arrangement.

“How would you handle paragraph 5C?” Johnson was asked.

“I would confide entirely in paragraph 5B,” he replied.

“Do you know what’s in 5C?” the interviewer asked.

There are similar questions about Johnson’s other headline promise — a massive tax cut that would lift the highest rate of income tax to £80,000 from the current £50,000.

According to the Institute for Fiscal Studies, it would gift almost £2,500 a year to the richest 10% in Britain, at outcome apparently at odds with his promise that his government would not leave the poor behind.

Prior to politics, Johnson had a brief career as a journalist in which he became known for stories that were entertaining, if not especially accurate.

He was sacked by The Times in 1988 for fabricating a quote, then secured a job in 1989 as the Brussels correspondent of the highly Eurosceptic Daily Telegraph. In this role, he perfected what a former colleague describes as the Euromyth — a tale of runaway EU bureaucracy story that “contained a tiny element of truth at the outset but which was magnified so far beyond reality that by the time it reached the reader it was false.”

Exaggerated tales of EU officialdom became a genre in their own right, to the delight of then Prime Minister Margaret Thatcher, the most Eurosceptic British leader of modern times.

He could not have known at the time, but it was ideal preparation for his decisive role in the pro-Brexit campaign in the 2016 referendum, in which he toured the country in a bus that promised £350 million extra every week for the National Health Service — a lie.

Johnson’s campaign rested heavily on his two terms as Mayor of London, citing his record of reducing the murder rate, creating jobs and delivering the London 2012 Olympics despite being entangled in a zip wire.

However, it also overlooked vanity projects such as a little-used cable car, an expensive but problematic ‘New Bus for London’ and the £43m of taxpayers’ money wasted on aborted plans for a pedestrian-only ‘garden bridge’ over the River Thames covered with trees and plants.

His time in parliament, either side of his spell as London mayor, was less successful. He became the Conservative MP for Henley in 2001, despite still holding down as job as editor of right-wing weekly The Spectator, but was sacked from the Tory front bench in November 2004 for misleading his then party leader about an extra-marital affair.

After returning to Westminster in 2016, his two years as foreign secretary were studded with missteps. He was recorded saying that a Libyan city could become a tourism hub once authorities “clear the dead bodies away,” and worsened the plight of a British-Iranian woman detained in Tehran by repeating an incorrect Iranian allegation that she was a journalist.

There was relief in Britain’s Foreign and Commonwealth Office when Johnson quit the government in protest at May’s withdrawal agreement deal.

After winning a clear majority among Conservative members of parliament in June, Johnson was seen as virtually home and dry in the membership vote.

Perhaps the only obstacle to his coronation loomed when discussion turned to his character.

Theresa May took a thinly-disguised swipe at him when she spoke of the need for public service rather than simply a desire for power.

“All too often, those who see it as a position of power see it as about themselves and not about the people they are serving,” she said. “There is a real difference.”

Given his history of gaffes and inappropriate comments, Johnson’s campaign managers have kept him away from as many interviews as possible, but his failure to attend two television debates led to accusations of cowardice.

Hunt landed a blow during one hustings, asking Johnson if he would resign on principle if Britain does not leave the EU on October 31. When Johnson was evasive in reply, Hunt teased: “It’s not do or die, is it? It’s Boris in Number 10 that matters.”

Although Johnson has many admirers, many former colleagues speak of a man lacking principles, who has a short temper and who bears grudges.

His private life came under scrutiny, again, when police visited his London home after neighbours reported a loud quarrel with his girlfriend.

“While he is a brilliant entertainer who made a popular maître d’ for London as its mayor, he is unfit for national office,” his former editor Max Hastings wrote in June. “He cares for no interest save his own fame and gratification. We can’t predict what a Johnson government will do, because its prospective leader has not got around to thinking about this. But his premiership will almost certainly reveal a contempt for rules, precedent, order and stability.”

His huge political ambition was evident from an early age and detailed in Sonia Purnell’s 2011 biography of Johnson “Just Boris – A Tale of Blond Ambition”.

Fans of Johnson are unlikely to regard a Trump-style disregard for “rules” as a criticism, nor would they see his integrity as a more important issue than securing Britain’s exit from the EU.

When Hunt accused him of “peddling optimism” in place of a detailed or viable solution to Brexit, Johnson retorted: “I think this country needs a bit of optimism, frankly.”

Johnson sees optimism and confidence as strategies in themselves, and the success of Trump’s positive MAGA message has not gone unnoticed.

Political scientist Tim Bale said it would be a mistake to see Johnson “as the panel-show host and mayor of London of days gone by, rather than the Steve Bannon-influenced, Trump-influenced populist that he has since become.”

Johnson’s relentless ambition and boundless confidence — he wrote a “flawed but fascinating” biography of Winston Churchill — might be the missing ingredient in Britain’s Brexit strategy.

“Johnson has street kerb appeal, no doubt about that,” said Ed Costelloe, a party member for more than 50 years and chairman of the traditionalist group Grassroots Conservatives.

“He could make a fool of himself, but equally I look back to characters like Ronald Reagan,” Costelloe said. “Lazy and not particularly intellectual, but he [Reagan] made sure to surround himself with people who knew what they were doing. And he goes down in history as a damned good president.”

“As a freelancer your biggest advantage is that you only need a handful of clients to succeed. Most companies need to find thousands of customers. You only need to find one at a time.” – Robert Williams – Start freelancing by subscribing to THE ONLINE PUBLISHERS to get worldwide exposure in the digital marketing and publishing industry.