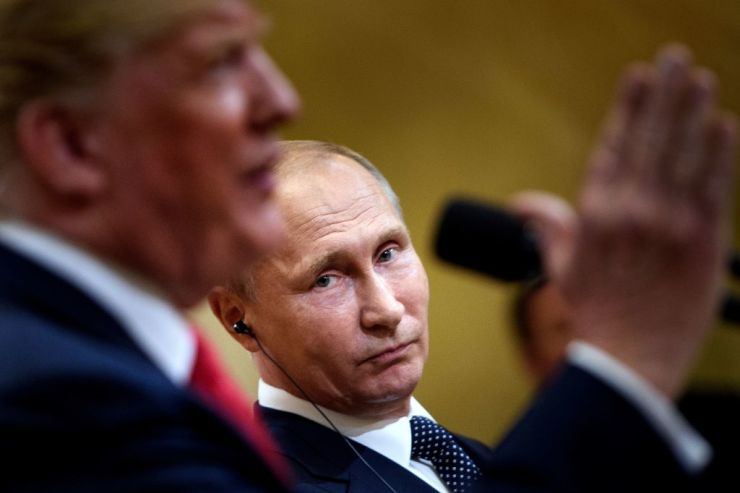 President Vladimir Putin said Russia is ready to restart discussions with the U.S. over arms control and denied that the collapse of a significant nuclear missile treaty between the two nations would prompt an arms race.

Putin said Thursday there had “recently been signs that Washington is beginning to consider resuming bilateral dialogue on a wide-ranging strategic agenda,” despite its recent decision to pull out of the Intermediate-Range Nuclear Forces Treaty (or INF treaty) signed in 1987.

“I think that the achievement of concrete agreements in the field of arms control would contribute to strengthening international stability. Russia has the political will to work towards this. Now it’s up to the U.S.,” Putin said in an interview with Italian newspaper Corriere della Sera.

He said he had spoken to President Donald Trump on the matter during their recent meeting on the sidelines of the Group of Twenty (G-20) summit in Japan last weekend.

Putin formally suspended Russia’s participation in the INF treaty with the U.S. on Wednesday. The treaty stated that neither country can produce, possess, or flight-test ground-launched, intermediate-range ballistic and cruise missiles with a range between 500 and 5,500 kilometers.

The Trump administration said in October that it planned to pull out of the treaty and confirmed its withdrawal in February, saying Russia had violated the agreement by building a new missile system. Russia denies the accusations and has in turn accused the U.S. of violating the terms.

Russia has said the U.S.′ missile defense system in eastern Europe is a violation of the agreement; the U.S. insists the system is to defend itself and Europe from “rogue states.”

Meanwhile, the U.S. has said Russia has violated the treaty with what it says is a “non-compliant missile system” called the 9M729 (or SSC-8) cruise missile system. Russia refutes this, claiming that the missile conforms to INF treaty limits. In February, Putin warned of a resolute response if the U.S. decides to station missiles in countries neighboring Russia.

The INF treaty was signed in 1987 and was designed to end decades of heightened insecurity surrounding arms fomented during the Cold War.

The U.S. formally withdraws from the agreement on August 2. In late June, NATO called on Russia to save the treaty by destroying the disputed cruise missile system but there are no signs this will happen.

The collapse of the INF treaty comes amid heightened geopolitical tensions following Russia’s annexation of Crimea in 2014, as well as its role in an uprising in eastern Ukraine.

Putin told the Italian newspaper that the “collapse of the international security system” had begun when the U.S. had unilaterally withdrawn from the Anti-Ballistic Missile Treaty (ABMT) in 2002 and that by now pulling out of the INF treaty, the U.S. was “de facto dismantling yet another agreement.” He said another nuclear reduction treaty, the Strategic Arms Reduction Treaty, also known as New START, was also under threat.

“How we should go forward together to reduce strategic armaments remains unclear. In early 2021 the New START treaty (on intercontinental missiles) expires. However, we are not currently seeing any U.S. willingness to discuss its extension or to draft a completely new agreement,” he said.

Putin said that there should be a comparison of “how much Russia spends on defense — about $48 billion — with the U.S. military budget — over $700 billion. So what arms race are we talking about?”

“We have no intention of getting involved in such a race, but we also have an obligation to ensure our security,” Putin said.

“Journalism is an act of faith in the future.” – Ann Curry – Visit THE ONLINE PUBLISHERS to offer your services as a journalist.

Where to Find The Best Quality Translation Services.

4 Great Benefits To Advertising With TOP.

Where To Start For Trying To Make Money Online As A Trender.

THE ROLE OF SOCIAL MEDIA IN ONLINE LOBBYING.

Any amount of running linked to significantly lower risk of early death.