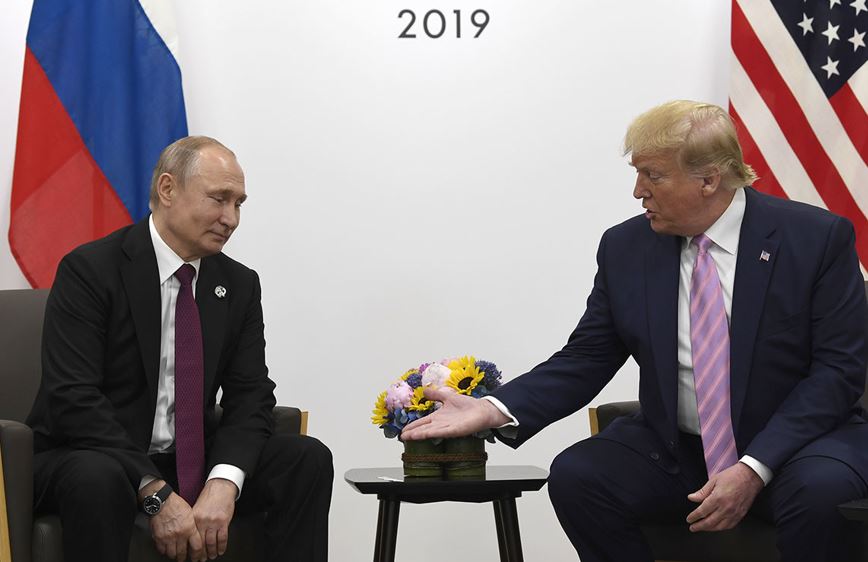 President Donald Trump told Russian President Vladimir Putin on Friday not to meddle in the U.S. elections, appearing to make light of a scandal that had led to a two-year investigation into his campaign’s contact with the Kremlin during the 2016 elections.

Asked by a reporter whether he would raise the issue during a bilateral meeting with Putin, Trump said: “Yes, of course I will.”

Trump then turned to Putin to give the directive twice while pointing at the Russian leader. Putin maintained a smile as the remark was interpreted for him.

Trump and Putin were heading into a meeting on the sidelines of the G-20 summit in Osaka, Japan. It was the first time the two leaders have had a formal face-to-face meeting since a controversial high-profile summit in Helsinki last July.

Relations between the two countries have been sour for years, worsening after Russia annexed Crimea from Ukraine in 2014 and backed Syrian President Bashar Assad in the Syrian war. In a recent television interview, Putin said that relations between Moscow and Washington were “getting worse and worse.”

For his part, Trump has sought better relations with Putin to tackle a host of issues, including his goal to rein in North Korea’s nuclear ambitions. On Friday, he emphasized the positive.

“Its a great honor to be with President Putin,” Trump said. “We have many things to discuss, including trade and including some disarmament.”

Speaking to reporters shortly before a bilateral meeting with Brazilian President Jair Bolsonaro later on Friday, Trump made clear that his priority at the summit would be trade deals to boost the U.S. economy.

The U.S. and China have imposed tariffs on billions of dollars’ worth of one another’s goods since the start of 2018, battering financial markets and souring business and consumer sentiment.

The world’s two largest economies have maintained firm stances ahead of Trump and President Xi Jinping’s meeting on Saturday morning, with the Chinese Ministry of Commerce calling on Washington to cancel its pressure and sanction measures on Huawei and other Chinese companies, while the U.S. president reiterated a threat to impose tariffs on all Chinese imports if talks fail.

When asked whether a deal could be agreed over the weekend, Trump replied: “I think we have a very good chance.”

“We’ll see what happens. Ultimately, something will happen and it will only be good.”

The Trump administration also has ongoing trade feuds with India and Japan, whose leaders he met with on Friday.

The U.S. president said he expected America’s trade prospects to improve over the coming months, days after criticizing the U.S.-Japan security treaty and demanding that India withdraw retaliatory charges.

Many of the world’s top 20 economies voiced their concern about trade tensions and the risk they pose to global growth on Friday, but Japanese and Russian delegates said international leaders were at loggerheads on key issues such as World Trade Organization (WTO) reform.

Nishimura said world leaders agreed to focus on driving global growth, at a time when escalating trade tensions were likely to exacerbate downside risks to the world economy. However, that was as far as they could agree.

Russia’s economy minister told reporters Friday that there was no consensus among the G-20 members on how to reform the WTO.

The Trump administration has complained the WTO fails to adequately address many of the challenges posed by China’s state-run economy. But, reforming the nearly 25-year-old organization has proved difficult — particularly because any member can block new rules.

The 164 members of the WTO are expected to hold their next ministerial meeting in Kazakhstan in June, 2020.

“The first thing you need to decide when you build your blog is what you want to accomplish with it, and what it can do if successful.” – Ron Dawson – Subscribe with THE ONLINE PUBLISHERS to offer your services as a blogger.

EVERYTHING BUSINESSES NEED TO KNOW ABOUT FOREIGN DIRECT INVESTMENTS.

Ex-Cisco CEO says Facebook needs to ‘get ahead of regulators,’ faces a multiyear challenge.