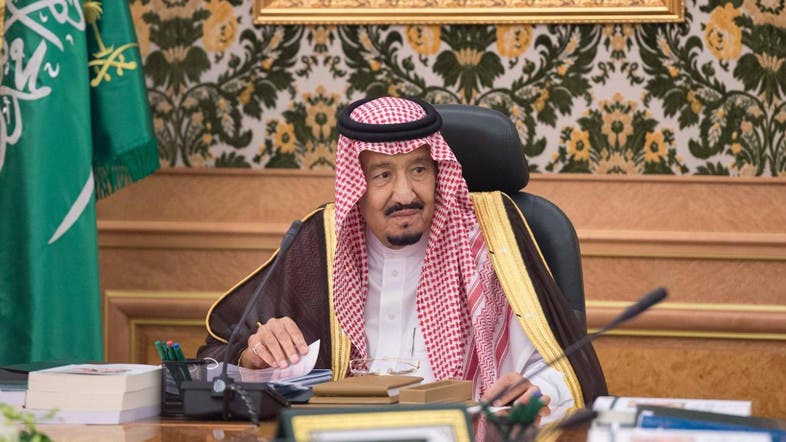 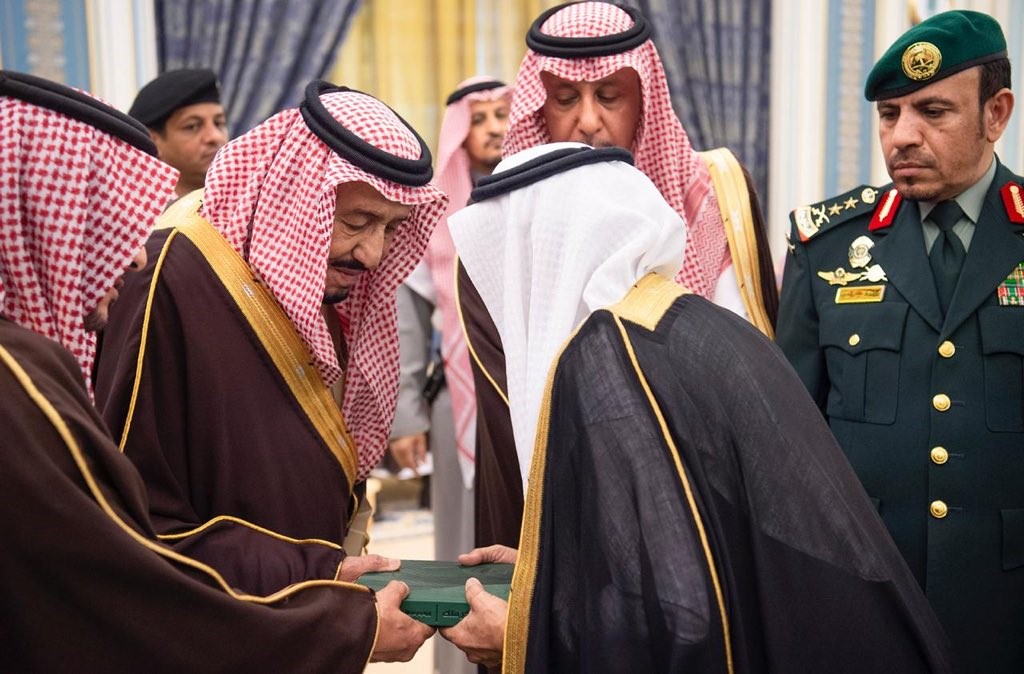 On March 19, 2019, King Salman received a copy of the 424-pages book authored by Dr. Ibrahim Al-Mutrif, on the four-years reign of King Salman, in the presence of the President of the Royal Protocols and the Commander of the Royal Guards.

Saudi Arabian foreign policy in the reign of King Salman bin Abdulaziz is emanating from a number of strategic objectives, some of which are: enhancing the position of the Kingdom at the Gulf, Arab, regional, Islamic and international levels; emphasizing its “spiritual” significance and its historical mission; and keeping pace with the questions raised by its geographic  inevitability and geopolitical necessity.

Re-engineering the Saudi Arabia’s foreign policy axes as well as its strategic objectives and tools, is considered the most important title for King Salman’s reign, in response to world events and the Arab turmoil transformations. Also in response to the rapid and successive events surrounding those transformations.

The most important foreign policy axes in the reign of King Salman is to develop the Kingdom’s relations with the international community and its components. Hence, the importance of the Saudi diplomatic movement came to include the global community, especially those countries located in vital areas for the Kingdom.

Despite the variation of the current historical moment, its nature, its circumstances and its successive changes, one cannot isolate the process of the “re-engineering” of the Saudi foreign policy from its “fundamental constants” on which the Kingdom’s foreign policy was formed since the era of King Abdulaziz. But, one would find that existing policies are being adopted in the framework of those constants, taking into consideration the nature, variables and peculiarities of the moment, as well as their tools and mechanisms, which might be different.

Observers also note that the power of Saudi Arabia is no longer limited to its financial wealth, that the Kingdom has consistently been providing to many countries around the globe, and devoting it for serving many nations, assisting them to encounter and finance their crises and economic problems, in the form of aid and/or funding. Saudi power today, is exceeding those soft diplomacy tools and limits, to include military and diplomatic powers as well.

As such, Saudi Arabia, as recognized by circles concerned with military studies and strategies, has now possessed one of strongest armies in the region, in term of military force and equipment. Moreover, the Kingdom does not only possess the military force, but it possesses the confidence in that force, and the independence to use it. This fact has been demonstrated clearly and globally, when the “Peninsula Shield Force” entered Bahrain in 2011, to participate in protecting the Kingdom from external plots targeting the security of Bahrain.

Furthermore, and due to the foreign policy re-engineering referred to above, Saudi Arabia gave up its usual quiet diplomacy and adopted an active foreign policy.  As a result, the Saudis began proposing initiatives and forming coalitions within the framework of a clear national security vision. One of the manifestations of clear and tangible transformation in the foreign policy of the Gulf region in general and Saudi Arabia in particular, is what we are witnessing today in the pioneering role that is being played by the Kingdom in the regional arena, to the extent that some observers started referring to that, as the “Saudi Moment” while others, started explicitly speaking of the “Saudi era” in the Middle East.

This unique and distinguished foreign policy performance, during an exceptional, historical, regional and international moment, cannot take place in isolation from the new trend, which the writer referred to as the “re-engineering” of the Saudi foreign policy. The re-engineering of related foreign policy tools and mechanisms, was meant to cope with the rapid and successive global developments.

Noticeably, Saudi foreign policy, within few months of King Salman’s reign witnessed active, positive and fruitful movements using diplomatic tools in a wide range that included important countries from extreme East to extreme West. It is important to point out here some of the results of the this new diplomatic and political performance. First and foremost, the expansion of the range of Kingdom’s international relations. Second, the enhancement of its economic relations. Third, the diversification of the Kingdom’s arms and military power sources, a step that will have a grater impact on ensuring the Kingdom’s freedom in its international movement, political independence and the expansion of its scientific and technological experience base.

The re-engineering of the key pillars of the Saudi foreign policy and its principles, has not been isolated from its broad strategic vision, aimed at the strengthening of the Saudi international relations, by adopting a balanced relations policy allowing for relations with all major powers, leading to further enhancement of strategic partnerships. The re-engineering allows also for the strengthening of relations with world’s largest economies; the development of stronger relations with emerging powers, and with the Kingdom’s relations allies within the Islamic and Arab camps; and most importantly, within the GCC system.

Undoubtably, those pillars will reflect on the Kingdom’s greater political and diplomatic future capabilities, giving it the opportunity of movement in all directions, and on all axes. This will result in ensuring the Kingdom’s position, maintaining its interests and safeguarding its national security, sovereignty, independence and unity.