Latest Articles
Home DIPLOMACY Who is in the running to be UK’s next prime minister and what’s their view on Brexit? 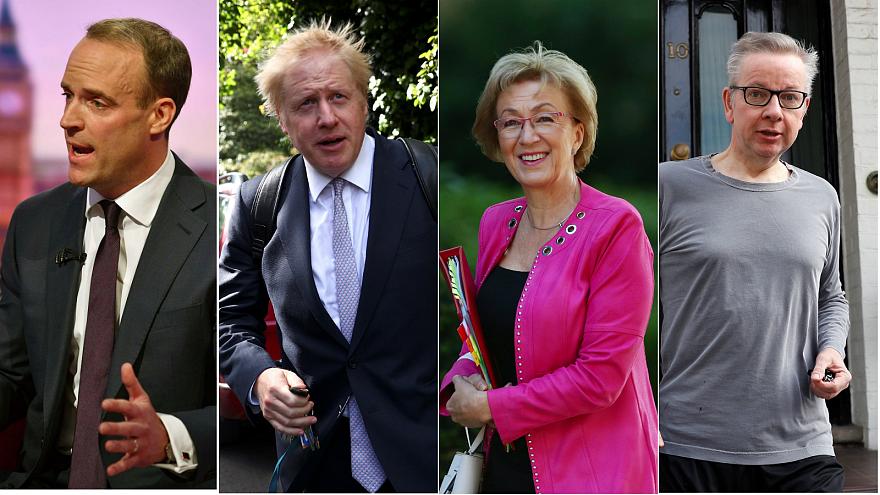 Who is in the running to be UK’s next prime minister and what’s their view on Brexit?

Theresa May steps down as the leader of Britain’s ruling Conservative Party leader on Friday (June 7), kickstarting a contest among numerous hopefuls looking to replace her as UK prime minister.

She will remain in Downing Street as caretaker prime minister until next month, when the Tory leadership race concludes.

The outcome will determine the country’s direction in the run-up to October 31, the revised date for the country’s scheduled departure from the European Union.

EU leaders agreed an extension of several months after Theresa May failed repeatedly to get the negotiated exit deal through the UK parliament.

So who has thrown their hat into the ring for the UK’s top job, and where do they stand on its hottest political topic — Brexit?

The former foreign secretary and mayor of London is an early frontrunner for the leadership contest, according to British bookmakers.

Johnson was a prominent lead figure in the Vote Leave campaign in the months leading up to Brexit and has maintained that he wants to see the UK leave the European Union regardless of having a deal in place.

Speaking on the day May announced her departure (May 24), Johnson said: “We will leave the EU on October 31, deal or no deal. The way to get a good deal is to prepare for a no deal.”

The 54-year-old was long thought to be a frontrunner to succeed UK Prime Minister David Cameron in 2016, but he famously pulled out of the race after his Vote Leave ally Michael Gove derailed his efforts.

Environment secretary Michael Gove is a Brexiteer most famous for shattering the leadership hopes of his longtime friend and Vote Leave ally Boris Johnson.

After Cameron’s resignation in 2016 over the EU referendum result, Johnson quickly rose as a favourite for the top job. But a last-minute candidacy entry from Gove — literally hours before the nominations closed — sought to scupper Johnson’s hopes.

Gove came out to say he believed Johnson was the no longer right man for prime minister, therefore putting himself forward.

Johnson then said he would be backing away from a leadership bid for himself instead of launching a campaign.

While still a Brexit supporter, Gove has recently maintained that he would allow EU nationals living in the UK at the time of the 2016 referendum to apply for citizenship for free.

The former Brexit secretary has had a tumultuous time in government over the last few years.

Raab was initially sacked from his post as justice minister when May became prime minister in 2016, but later became Brexit secretary in 2018.

He then resigned from the post over disagreements with May’s deal.

But now he’s back and says he wants to negotiate a new Brexit deal with Europe that he says would be fair for everyone.

“I would prefer that we leave with a deal,” he wrote in the Mail Online. “But we will not be taken seriously in Brussels unless we are clear that we will walk away on World Trade Organisation (WTO) terms if the EU doesn’t budge.”

Raab has reportedly suggested that he would be prepared to shut down parliament to ensure the UK leaves the EU on October 31 — a move that could provoke a constitutional crisis and has been condemned by other leadership candidates.

The foreign secretary has entered the leadership contest with a firm message posted to his Facebook page, outlining his beliefs of healing a “fractured” Conservative party and avoiding a general election that would be a “prospectus for disaster”.

Hunt voted three times in favour of the Brexit deal negotiated by Theresa May, but said on Monday that it was only because he believed that it was better than a no-deal scenario.

But should he win the leadership contest, he says he would pursue a reopening of negotiations with the European Union as he believes a different deal is “the only solution”.

Among his pursuits is to leave the Customs Union while taking note of the Irish border, and not committing to a set date to leave the EU.

Hunt maintains that a hardline approach is not the way forward as it would be met harshly in Europe, and could trigger a general election, which could see the UK’s opposition in government “by Christmas”.

While Hunt campaigned for the UK to remain in the EU during the leadup to the 2016 referendum, he has since delivered scathing remarks toward the bloc, including a comparison to a “prison” of the Soviet Union.

The former leader of the House of Commons resigned from her post just days before Theresa May also confirmed her exit.

In her resignation letter, she cited concerns over May’s Brexit bill, saying she no longer believed the approach “would deliver on the referendum result”.

Leadsom famously went head-to-head against May in the 2016 prime ministerial race, but was forced to withdraw after suggesting in an interview that as a mother she would make a better candidate than May for the job.

Speaking to reporters after announcing her candidacy earlier this week, the prominent Brexiteer said she believed she was the “decisive and compassionate leader” necessary to deliver on the referendum result.

The newly-appointed international development secretary is not expected to be a frontrunner in this leadership contest, but he was one of the first members of the party to register public interest in the job.

Stewart entered politics in the last decade after building his career as a diplomat in the Middle East.

He has strongly condemned other candidates’ readiness to back a no-deal Brexit, and openly supported May’s deal as a compromise for both sides of the debate — and says a hardline Brexit would mean succumbing to an “extreme polarisation of politics”.

Drawing on his international experience, he told the Spectator: “Difficult periods need different types of people.”

“One of the reasons why I would be tempted towards this job is that we desperately need to rebuild ourselves internationally after Brexit.”

Stewart’s campaigning style has also garnered attention with regular selfie videos posted to social media across London, inviting people to come and chat with him about Brexit.

The Home Secretary voted “with a heavy heart and no enthusiasm” to remain in the EU in 2016, but said that if it were a vote on whether the UK should join the EU in the first place, he would have voted to reject it.

He is the son of a Pakistani cotton mill worker and bus driver, who is said to have arrived in the UK with a “£1 note in his pocket”.

Javid entered the finance industry and rose to become the head of credit trading at Deutsche Bank, before entering politics.

In his bid for the UK’s top job, Javid said he wanted “restore trust” in the UK, and to “deliver on Brexit”.

Despite voting to remain in the 2016 referendum, the health secretary has promised to deliver Brexit in his leadership bid.

However, he wishes to do so with a deal in place.

Speaking exclusively to the Sun, Hancock says he would take a “straightforward” approach in order to “bring people together behind a proposal”.

He also toyed with the idea of returning to the negotiating table with the EU, but admitted that it would mean having “a plan B and bring people together in Parliament”.

In his candidate statement, Hancock said renegotiating the EU Withdrawal Agreement would be impossible, but the EU is open to modifying the Political Declaration on future ties. A no-deal exit would not be an option as parliament would not back it.

Writing in the Telegraph: “No one is a more committed Brexiteer than me”, McVey has made her position clear.

She is campaigning for the UK to leave the EU with a “clean break” on October 31, meaning with or without a deal.

“The withdrawal agreement ship has sailed,” she wrote on Twitter, before vowing to take a “bold and positive” approach on delivering Brexit so “we can all move on”.

Mark Harper has entered the race criticising his fellow contenders say the party needs a fresh face to get them out of their current crisis.

He told Sky News “I don’t think we should take the people who were responsible for where we got to now and assume they’ve got the solutions for how we move forward.

“They’ve been sat round the cabinet table over the last three years and…you can’t be a bystander if you’re in the cabinet.”

He has attacked the “glib soundbites” of many of the candidates and accused several of them as having “failed” on Brexit.

Although he previously served as immigration minister and chief whip in David Cameron’s government he was not given a role in Theresa May’s and has kept a relatively lower profile in recent years.

He supported Remain during the referendum but now says he wants to take a new Cabinet to Brussels to negotiate a new deal. He said it is not credible for the UK to leave the EU with a deal by 31st October so he is proposing a further extension to Article 50. He has not ruled out no deal.

The former universities minister entered the race on Sunday (June 2).

He is the only Tory leadership candidate suggesting that there be a second Brexit referendum.

“There’s a very narrow set of views on Brexit being discussed,” Gyimah told Sky News, saying that there was a broad difference of opinion across the United Kingdom that was not reflected in the conservative leadership contest.

He critiqued Nigel Farage saying he wanted to “break the system” and break the conservative party.

Gyimah resigned from the government last year after May announced that the UK would not be involved in the EU’s Galileo programme post-Brexit.

How will the new leader be chosen?

The Conservative Party will select its new leader in two stages: a series of votes among its MPs, followed by a ballot of party members.

Candidates supported by at least eight other colleagues will be able to stand in the race in the week beginning June 10.

Tory members of parliament will then hold several votes, eliminating candidates until only two remain.

A run-off will then be staged among the membership of 124,000, who will choose between the final pair.

Two other leadership contenders — James Cleverly and Kit Malthouse — pulled out of the race following criticism that there were too many candidates, and the party’s selection rules were tightened.

Norway to allow dual citizenship from 2020.